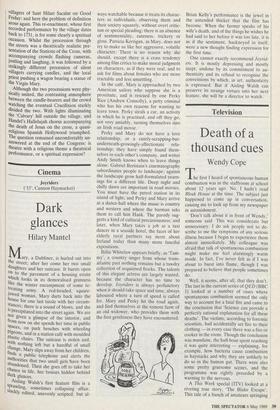 Mary, a Dubliner, is hurled out into the street; after her come her two small daughters and her suitcase. It bursts open on to the pavement of a housing estate Which looks in its demoralised grimness like the winter encampment of some re- treating army. A red-headed, square- jawed woman, Mary darts back into the house for one last tussle with her circum- stances; there is a sound of blows, and she is precipitated into the street again. We are not given a glimpse of the interior, and from now on she spends her time in public spaces, on park benches with wheeling Pigeons, and in a station café with moulded Plastic chairs. The suitcase is stolen and, With nothing left but a handful of small change, Mary slips away from her children, finds a public telephone and alerts the authorities that two small girls 'have been abandoned. Then she goes off to take her chance in life, her bruises hidden behind dark glances.

ways watchable because it treats its charac- ters as individuals, observing them and their society squarely, without overt critic- ism or special pleading; there is an absence of sentimentality, cuteness, trickery or gloss. Patricia Kerrigan, as Mary, does not try to make us like her aggressive, volatile character. There is no reason why she should, except there is a crass tendency among film critics to make moral judgment on characters, as if they were real, and to ask for films about females who are more tractable and less unsettling.

In the café, Mary is approached by two American sailors who suppose she is a prostitute, and is rescued by one Perky Rice (Andrew Connolly), a petty criminal who has his own reasons for wanting to leave town. Perky steals a car, an activity in which he is practised, and off they go, not very amiably, turning themselves into an Irish road movie.

Perky and Mary do not have a love relationship, or a cutely-scrapping-but-

underneath-growingly-affectionate rela- tionship; they have simply found them- selves in each other's company, and writer Andy Smith knows when to leave things alone. Gabriel Beristain's cinematography subordinates people to landscape; against the landscape grow half-formulated yearn- ings for a different life. Deep night and chilly dawn are important in road movies. You must have the petrol station in its island of light; and Perky and Mary arrive at a dance-hall where the music is country and western and where the barman asks them to call him Hank. The parody sug- gests a kind of cultural precariousness; and later, when Mary takes a job as a taxi dancer in a seaside hotel, the faces of her elderly rural partners say more about Ireland today than many more fanciful expositions.

Billie Whitelaw appears briefly, as 'Tam- my', a country singer from whose trans- atlantic past nothing remains but a tawdry collection of sequinned frocks. The talents of this elegant actress are largely wasted, because the character has no time to

develop. Joyriders is always perfunctory when it should take space and time, always

laboured where a turn of speed is called for. Mary and Perky hit the road again, and find themselves at the remote farm of an old widower, who provides them with the first gentleness they have encountered. Brian Kelly's performance is the jewel in the untended thicket that the film has become. When the farmer speaks of his wife's death, and of the things he wishes he had said to her before it was too late, it is as if the sentiment, hackneyed in itself, were a new thought finding expression for the first time.

One cannot exactly recommend Joyrid- ers. It is mostly depressing and mostly inept, undone by its commitment to au- thenticity and its refusal to recognise the conventions by which, in art, authenticity is expressed. But if Aisling Walsh can preserve its strange virtues into her next feature, she will be a director to watch.