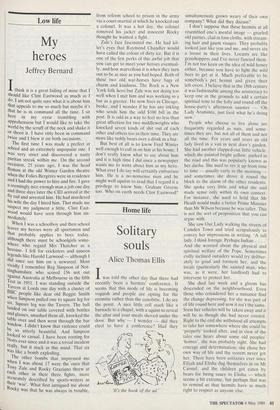 do. I am not quite sure what it is about him that appeals to me so much but maybe its that he is in command all the time. I sit here in my eyrie trembling with apprehension but I would like to take the world by the scruff of the neck and shake it Or shoot it. I have only been in command twice and I blew it on both occasions.

The first time I was made a prefect at School and an extremely unpopular one. I was very strict and discovered a nasty puritan streak within me. On the second occasion, 25 years ago, I was the head flyman at the old Winter Garden theatre When the Folies Bergeres were in residence and I had the power to hire and fire. [gave a seemingly nice enough man a job one day and three days later the CID arrived at the fly rail and arrested him. He had murdered his wife the day I hired him. That made me suspect my judgment a little. Clint East- wood would have seen through him im mediately.

When I was a schoolboy and then school leaver my heroes were all sportsmen and that probably applies to boys today, although there must be schoolgirls some- where who regard Mrs Thatcher as a heroine. I fell for cricketers and unseen legends like Harold Larwood — although I did. once see him on a newsreel. Most v.ividly I remember Reg Simpson of Not- tinghamshire who scored 156 not out against Australia at Melbourne in the fifth Test in 1951. I was standing outside the Tavern at Lords one day with a cluster of BBC people like dear old Reggie Smith When Simpson pulled one to square leg for six. Square leg was the Tavern. The ball landed on our table covered with bottles and glasses, smashed them all, knocked the table over and then went through the bar window. I didn't know that violence could be so utterly beautiful. And Simpson looked so casual. I have been rooting for Notts ever since and it was a trivial incident really, but it stuck in this mind. That six was like a bomb exploding.

The other bombs that impressed me When I was about 17 were the onesthat Tony Zale and Rocky Graziano threw at each other in their three fights, more accurately described by sports-writers as their 'war'. What first intrigued me about Rocky was that he was always in trouble, from reform school to prison in the army 'via a court-martial at which he knocked out a colonel. It was a hot day, the colonel removed his jacket and innocent Rocky thought he wanted a fight.

Zale's face fascinated me. He had kil- ler's eyes that Raymond Chandler would have called the colour of dirty ice. But it is one of the few perks of this awful job that you can get to meet your heroes eventual- ly, and how marvellous it is when they turn out to be as nice as you had hoped. Both of these two old war-horses have bags of charm and kindness. The Rock is a New York folk hero but Zale was not doing too well when I met him and was working in a bar as a greeter. He now lives in Chicago, broke, and I wonder if he has any inkling who sends him the odd $100 bill in the post. It is odd in a way to feel no less than great affection for two middleweights who knocked seven kinds of shit out of each other and others too in their time. They are more like teddy bears over a drink in a bar.

But best of all is to know Fred Winter well enough to call in on him at his home. I don't really know what to say about him and it is high time I did since a newspaper wants me to write about him as my hero. What ever I do say will certainly embarrass him. He is a no-nonsense man and he might well squirm to read that I regard it a privilege to know him. Graham Greene too. Who on earth needs Clint Eastwood?