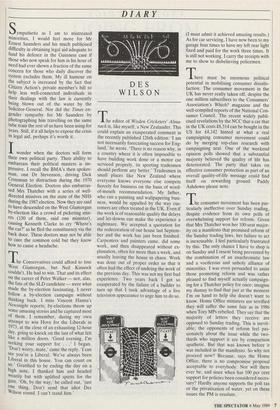 Sympathetic as I am to mistreated minorities, I would feel more for Mr Ernest Saunders and his much publicised difficulty in obtaining legal aid adequate to fund his defence in the Guinness case if those who now speak for him in his hour of need had ever shown a fraction of the same concern for those who daily discover the System excludes them. My ill humour on the subject is increased by the fact that Citizen Action's private member's bill to help less well-connected individuals in their dealings with the law is currently being blown out of the water by the Solicitor-General. Nor did the Times en- gender sympathy for Mr Saunders by Photographing him travelling on the same tube train the rest of us have been using for years. Still, if it all helps to expose the crisis in legal aid, perhaps it's worth it.

Iwonder when the doctors will form their own political party. Their ability to embarrass their political masters is im- pressive. I recall the BMA's then spokes- man, one Dr Stevenson, driving Dick Crossman to distraction during the 1970 General Election. Doctors also embarras- sed Mrs Thatcher with a series of well- directed missives on the state of the NHS during the 1987 election. Now they are said to have descended on the West Glamorgan by-election like a crowd of picketing min- ers (150 of them, said one minister), causing Kenneth Clarke to cry 'Where's the car?' as he fled the constituency via the back door. These doctors may not be able to cure the common cold but they know how to cause a headache.

he Conservatives could afford to lose West Glamorgan, but Neil Kinnock couldn't. He had to win. That and its effect on the career of Peter Walker — not, alas, the fate of the SLD candidate — were what made the by-election fascinating. I never follow a by-election campaign without thinking back. I miss Vincent Hanna's Newsnight reports; by-elections throw up some amusing stories and he captured most Of them. I remember, during my own attempt to win Hove for the Liberals in 1973, at the close of an exhausting 12-hour day, going to knock on the last of what felt like a million doors. 'Good evening, I'm seeking your support for . . .' I began. Don't worry, mate,' came the reply. 'I can see you're a Liberal. We've always been Liberal in this house. You can count on US.' Gratified to be ending the day on a high note, I thanked him and headed wearily but with uplifted spirits for the gate. 'Oh, by the way,' he called out, 'just one thing. Don't send that idiot Des Wilson round. I can't stand him.' he editor of Wisden Cricketers' Alma- nack is, like myself, a New Zealander. This could explain an exasperated comment in the recently published 126th edition: 'I am not necessarily forecasting success for Eng- land,' he wrote. 'There is no reason why, in a country where it is often impossible to have building work done or a motor car serviced properly, its sporting tradesmen should perform any better.' Tradesmen in small places like New Zealand where everyone knows everyone else compete fiercely for business on the basis of word- of-mouth recommendation. My father, who ran a painting and wallpapering busi- ness, would be appalled by the way cus- tomers are often treated in the UK. Even if the work is of reasonable quality the delays and let-downs can make the experience a nightmare. We accepted a quotation for the redecoration of our house last Septem- ber and the work has just been finished. Carpenters and painters came, did some work, and then disappeared without ex- planation, often for more than a week, and usually leaving the house in chaos. Work was done out of proper order so that it often had the effect of undoing the work of the previous day. This was not my first bad experience. Two years back I got so exasperated by the failure of a builder to turn up that I took advantage of a live television appearance to urge him to do so. (I must admit it achieved amazing results.) As for car servicing, I have now been to my garage four times to have my left rear light fixed and paid for the work three times. It is still not working. I carry the receipts with me to show to disbelieving policemen.

here must be enormous political potential in mobilising consumer dissatis- faction. The consumer movement in the UK has never really taken off, despite the one million subscribers to the Consumers' Association's Which? magazine and the well-compiled reports of the National Con- sumer Council. The recent widely publi- cised revelations by the NCC that a car that in the UK costs £6,514 can be bought in the US for £4,142 hinted at what a real campaigning consumer movement could do by merging top-class research with campaigning zeal. One of the weekend opinion polls showed that a substantial majority believed the quality of life has deteriorated. The party that takes on effective consumer protection as part of an overall quality-of-life message could find itself on rewarding ground. Paddy Ashdown please note.

e consumer movement has been par- ticularly ineffective over Sunday trading, despite evidence from its own polls of overwhelming support for reform. Given that Mrs Thatcher won her 100-seat major- ity on a manifesto that promised reform of the Sunday trading laws, her failure to act is inexcusable. I feel particularly frustrated by this. The only chance I have to shop is on Sunday and I resent being prevented by the combination of an anachronistic law and a vociferous and unholy alliance of minorities. I was even persuaded to assist those promoting reform and was rather pleased to find myself actually campaign- ing for a Thatcher policy for once; imagine my dismay to find that just at the moment I'm on hand to help she doesn't want to know. Home Office ministers are terrified they will suffer the same fate as in 1986 when Tory MPs rebelled. They say that the majority of letters they receive are opposed to Sunday trading. This is inevit- able; the opponents of reform feel pas- sionately about the issue while the two- thirds who support it are by comparison apathetic. But that was known before it was included in the manifesto. So why not proceed now? Because, says the Home Office, there is no compromise proposal acceptable to everybody. Nor will there ever be, and since when has 100 per cent support for policies been considered neces- sary? Hardly anyone supports the poll tax or the privatisation of water, yet on these issues the PM is resolute. T