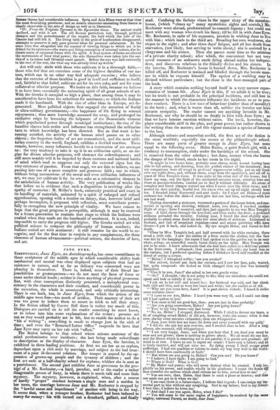 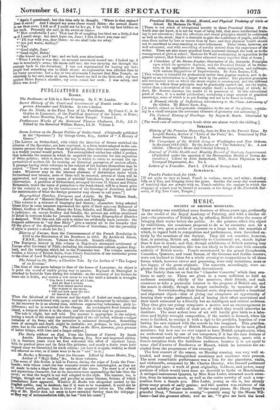 ESSENTIALLY, Jane Eyre, an Autobiography, has some resemblance to those sculptures of the middle ages in which considerable ability both mechanical and mental was often displayed upon subjects that had no existence in nature, and as far as delicacy was concerned were not pleasing in themselves. There is, indeed, none of their literal im- possibilities or grotesqueness—we do not meet the faces of foxes or asses under clerical hoods ; neither is there anything of physical grossness. But, with clear conceptions distinctly presented, a metaphysical con- sistency in the characters and their conduct, and considerable power in the execution, the whole is unnatural, and only critically interesting. There is one fault, too, in Jane Eyre, from which the artists of the middle ages were free—too much of artifice. Their mastery of their art was too great to induce them to resort to trick to tell their story. In the fiction edited by Currer Bell there is rather too much of this. Dialogues are carried on to tell the reader something he must know, or to infuse into him some explanations of the writer; persons act not as they would probably act in life, but to enable the author to do a "bit o' writing " ; everything is made to change just in the nick of time; and even the "Returned Letter Office" suspends its laws that Jane Eyre may carry on her tale with "effect."

The fiction belongs to that school where minute anatomy of the mind predominates over incidents ; the last being made subordinate to description or the display of character. Jane Eyre, the heroine, is exhibited in three leading positions. At first We see her as an orphan, dependant upon a rich aunt by marriage, and subject to the bad treat- ment of a poor ill-favoured relation. Her temper is soured by the op- pression of grown-up people and the tyranny of ohildren ; and the first act ends at a half-charity school for orphans, whither she is sent as a punishment. The second part exhibits Jane as governess to the pro- ttigi of a Mr. Rochester,—a hard, peculiar, and to the reader a rather' disagreeable person of forty, in whom there is much talk and some little mystery. The mystery, however, is explained, when, after a course of hardly "proper" conduct between a single man and a maiden in her teens, the marriage between Jane and Mr. Rochester is stopped by the "lawful cause and impediment" of another wife being in the way. It seems that, when a younger brother, Rochester had been induced to marry for money : his wife turned out a drunkard, gallant, and finally

mad. Confining the furious vixen in the upper story of the mansion.. house, (which " clears up " many mysterious sights and sounds,) Mr. Rochester went abroad, predetermined to commit bigamy ; but could not meet with any woman who struck his fancy, till he fell in with Jane Eyre. Mr. Rochester, in spite of his exposure, persists in wishing Jane to live with him ; which leads to the third act. Dreading her own weakness, she elopes in the night ; and after three days' fatigue, and all but death from starvation, (not likely, but serving to write about,) she is assisted by a clergyman and his sisters. Then she passes some time as the mistress of a private charity school; after which, the convenient but not very novel resource of an unknown uncle dying abroad makes her indepen- dent, and discovers relations in the friendly divine and his sisters. In the interim, Mr. Rochester's house is burned down, Mrs. Rochester is killed off, and Rochester is maimed and blinded through the heroic man- ner in which he exposes himself. The upshot of a wedding may be divined without particulars ; but the close is the best-manag,ed part of the book.

A story which contains nothing beyond itself is a very narrow repre- sentation of human life. Jane Eyre is this, if we admit it to be true; but its truth is not probable in the principal incidents, and still less in the manner in which the characters influence the incidents so as to pro- duce conduct. There is a low tone of behaviour (rather than of morality) in the book ; and, what is worse than all, neither the heroine nor hero attracts sympathy. The reader cannot see anything loveable in Mr. Rochester, nor why be should be so deeply in love with Jane Eyre; so that we have intense emotion without cause. The book, however, dis- plays considerable skill in the plan and great power, but rather shown in the writing than the matter; and this vigour sustains a species of interest to the last.

Although minute and somewhat sordid, the first act of the fiction is the most truthful; especially the scenes at the philanthropic school. There are many parts of greater energy in Jane Eyre, but none equal to the following scene. Helen Burns, a quiet Scotch girl, with a tendency to consumption, sinks under the hardships of the school. She is removed from the other scholars ; but Jane, uneasy when she learns the danger of her friend, steals to her room in the night.

"It might be two hours later, probably near eleven, when I—not having been able to fall asleep, and deeming, from the perfect silence of the dormitory, that my companions were all wrapt in profound repose—rose softly, put on my frock over my night-dress, and, without shoes, crept from the apartment, and set off in quest of Miss Temple's room. It was quite at the other end of the house; but I knew my way, and the light of the unclouded summer moon, entering here and there at passage-windows, enabled me to find it without difficulty. An odour of camphor and burnt vinegar warned me when I came near the fever room; and I passed it door quickly, fearful lest the nurse who sat up all night should hear me. I dreaded being discovered and sent back: for I must see Helen—I must embrace her before she died—I must give her one last kiss, exchange with her one last word.

"Having descended a staircase, traversed a portion of the house below, and suc- ceeded in opening and shutting, without noise, two doors, I reached another flight of steps; these I mounted, and then just opposite to me was Miss Temple's room. A light shone through the key-hole, and from under the door: a profound stillness pervaded the vicinity. Coming near, I found the door slightly ajar; probably to admit some fresh air into the close abode of sickness. Indisposed to hesitate, and full of impatient impulses—seal and senses quivering with keen throes—I put it back, and looked in. My eye sought Helen, and feared to and death.

"Close by Miss Temple's bed, and half covered with its white curtains, there stood a little crib. I saw the outline of a form under the clothes, but the face was hid by the hangings: the nurse I had spoken to in the garden sat in an easy chair, asleep; an nnsnuffed candle burnt dimly on the table. Miss Temple was not to be seen: I knew afterwards that she had been called to a delirious patient in the fever-room. I advanced; then paused by the crib side; my hand was on the curtain, but. I preferred speaking before I withdrew it—I still recoiled at the dread of seeing a corpse. '" Helen!' I whispered softly ; 'are you awake?'

"She stirred, herself put back the curtain and I saw her face, pale, wasted, but quite composed: she looked so little changed that my fear was instantly dissipated.

"Can it be you, Jane?' she asked in her own gentle voice. " Oh!' I thought,' she is not going to die; they are mistaken: she could not speak and look so calmly if she were. "1 got on to her crib and kissed her: her forehead was cold, and her cheek both cold and thin, and so were her hand and wrist; but she smiled as of old. "'Why are you come here, Jane? It is past eleven o'clock: I beard it strike some minutes since.'

" came to see you, Helen: I heard you were very ill, and I could not sleep till I had spoken to you.' "‘ You came to bid me good-bye, then: you are just in time probably.'

" No, no Helen': I stopped, distressed. While I tried to devour my tears, a fit of coughing seized Helen; it did not, however, wake the nurse: when it was over, she lay some minutes exhausted; then she whispered-

" ' Jane, your little feet are bare; lie down and cover yourself with my quilt: "I did so: she put her arm over me, and I nestled close to her. After a long silence, she resumed, still whispering- " Lam very happy, Jane; and when you hear that I am dead you must be sure and not grieve; there is nothing to grieve about. We all must die one day, and the illness which is removing me is not painful; it is gentle and gradual: my mind is at rest. I leave no one to regret me much: I have only a father; and he is lately married, and will not miss me. By dying young I shall escape great sufferings. I had not qualities or talents to make my way very well in the world: I should have been continually at fault.' " ' But where are you going to, Helen? Can you see? Do you know?' "'I believe; I have faith: lain going to God.' " Where is God? What is God.'

"‘ My Maker and yours; who will never destroy what he created. I rely im- plicitly on his power, and confide wholly in his goodness: I count the hours till that eventful one arrives which shall restore me to him, reveal him to me.' " You are sure; then, Helen, that there is such a place as heaven; and that our souls can get to it when we die.' "'I am sure there is a future state; I believe God is good: I can resign my im- mortal part to him without any misgiving. God is my father; God is my friend: I love him; I believe he loves me.'

" You will come to the same region of happiness; be received by the Mr mighty, universal Parent, no doubt, dear Jane.'

"Again I questioned; but this time only in thought. 'Where is that region? Does it exist's' And I clasped my arms closer round Helen: she seemed dearer to me than ever; I felt as if I could not let her go, I lay with my face hidden on her neck. Presently she said, in the sweetest tone- "' How comfortable lam! That last fit of coughing has tired me a little; I feel as if I could sleep: but don't leave me, Jane; I like to have you near me.' "'n1 stay with you, dear Helen: no one shall take me away.' "'Are you warm, darling ?'

"She kissed me, and I her; and we both soon slumbered.

"When I awoke it was day; an unusual movement roused me; I looked up; I was in somebody's arms; the nurse held me; she was carrying me through the passage back to the dormitory. I was not reprimanded for leaving my bed ; people had something else to think about: no explanation was afforded then to my many questions; but, a day or two afterwards I learned that Miss Temple' on returning to her own room at dawn, had found me laid in the little crib; my face against Helen Burns's shoulder, my arms round her neck. I was asleep, and Helen was dead."