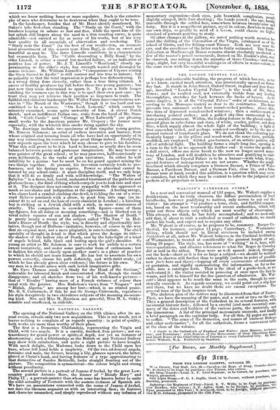 A large and noticeable building, the progress of which has not as tat as we know, excited much attention, was provisionally opened on Satur- day last. It stands in John Street, Oxford Street, in glass and iron front- age, inscribed " London Crystal Palace " ; is the work of Mr. Owen Jones; and its vaulted roof, not externally visible from any leading thoroughfare, stretches far back between the backs of houses. As its name implies, it is of the "Crystal Palace" order of architecture, ae. cording to the Moresque variety so dear to its constructor. The front presents two entrances under four round-arched porches; above this two tiers of depressed round-arched windows ; then a surface-wort of interlacing pointed arches • and a gabled sky-line surmounted by a honey-suckle ornament. Within, the leading feature is the glazed vault— ground glass in cube-forms and ;tars, of white, scarlet, yellow, and deep blue, which supply almost the whole light of the building ; a light at best somewhat veiled, and perhaps rendered needlessly so by the use of ground instead of translucent glass. We do not think the colouring par- ticularly happy : in the pillars and wood-work, the same tints, partially modified, are employed. Gilded gas-burners, of an artistic pattern, will afford artificial light. The building forms a single long line, opening in a turn to the left as we approach the further end : it varies the profile of a dull street, offers one more break to the now no longer sacred mono- tony of London, and will doubtless be attractive and gratifying to visit- ors. The London Crystal Palace is to be a bazaar—with what, if any special features of management we are not aware. Whether the neigh- bourhood which already comprises a German Bazaar, a Prince of Wales Bazaar, a Pantheon Bazaar, and a German Fair close by, and a Soho Bazaar near at hand, needed this addition, is a question which may occur to outsiders, but which they may be content to refer to the judgment and pockets of its projectors or lessees.