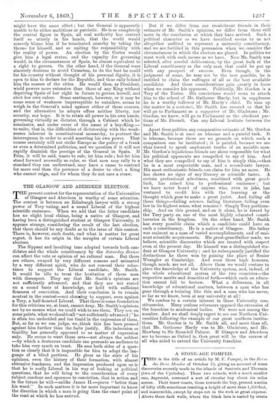 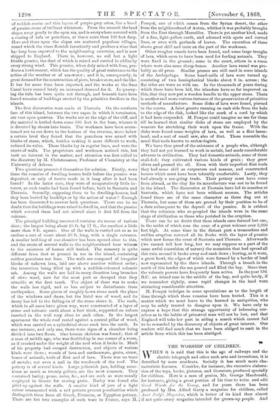 THIS is the title of an article by M. F. Fouquii, in the Revue 1 des Deux Mondes of October 15, giving an account of some discoveries recently made in the islands of Santorin and Therasia (two of the Cyclades). These two islands, with a much smaller one, Aspronisi, surround a sort of circular bay about six miles across. Their inner coasts, those towards the bay, present &series of lofty cliffs sometimes reaching a height of more than 1,300 feet, and inaccessible, except by steps cut in the rock at great expense. Above these dark walls, where the black lava is varied by strata

of reddish scorim and thin layers of purple-grey ashes, lies a band of pumice-stone of brilliant whiteness. From the summit the land slopes away gently to the open sea, and is everywhere covered with a coating of tufa or pozzolana, at times more than 100 feet deep. Here and there upon the slopes are scattered populous villages, round which the vines flourish luxuriantly and produce a wine that bag long been exported to the neighbouring countries, and is now shipped to England. There is, however, no soil but a light friable pumice, the dust of which is raised and carried in eddies by every strong wind. This pumice, when duly mixed with lime, pro- duces a hard cement, which has the quality of great resistance to the action of the weather or of sea-water ; and it is, consequently, in great demand for the construction of piers, breakwaters, and the like. It has for some time been exported, and the works at the Suez Canal have caused lately an increased demand for it. In quarry- ing the tufa has been quite cut through, and beneath have been found remains of buildings erected by the primitive dwellers in the islands.

The first discoveries were made at Therasia. On the southern face of this island, between the two capes in which it terminates, are vast open quarries. The works are at the edge of the cliff, and the material is hurled down some 500 feet to the base, whence it is directed by shoots into boats. The workmen have been accus- tomed not to cut down to the bottom of the stratum, since below • a certain level they found that the pozzolana was mixed with blocks-of stone, which, besides making it more difficult to work, reduced its value. These blocks lay in regular lines, and were the crests of walls. The proprietors and workmen noticed this, but took no interest in the matter, and attention was first called to the discovery by M. Christomauos, Professor of Chemistry at the University of Athens.

Two questions presented themselves for solution. Firstly, were these the remains of dwelling-houses built before the pumice was deposited, or only of tombs made in it long after it had been found? In the latter case, they were of comparatively little in- terest, as such tombs had been found before, both in Santorin and Therasia. Secondly, supposing them to be dwelling-houses, had they been buried by landslips or by the action of water ? Enough has been discovered to answer both questions. There can be no doubt that the buildings were raised to dwell in, and that the pumice which covered them had not stirred since it first fell from the volcano.

The principal building uncovered contains six rooms of various sizes ; the largest being about 20 ft. by 17 ft., the smallest a little snore than 8 ft. square. One of the walls is carried out so as to -enclose a sort of court about 26 ft. long, with a single entrance. A smaller building of one chamber has been opened close to this, and the crests of several walls in the neighbourhood bear witness to the existence of houses still buried. The masonry is quite different from that at present in use in the island, containing neither pozzolana nor lime. The walls are composed of irregular blocks of uuhewn lava, laid one above another without order ; the interstices being filled up with a reddish-coloured volcanic ash. Among the walls are laid in every direction long branches of olive wood, now for the most part so decayed that they crumble at the first touch. The object of these was to make the walls less rigid, and so less subject to disturbance from earthquakes. Some pieces of roughly-hewn atone mark the place of the windows and doors, but the lintel was of wood, and its decay has led to the falling-in of the stone above it. The roofs, which in all cases have given way, were constructed of a layer of stone and volcanic earth about a foot thick, supported on rafters inserted in the wall very close to each other. In the largest apartment the whole roof rested against a central pillar of wood, which was carried on a cylindrical stone sunk into the earth. In one instance, and only one, there were signs of a chamber being divided into two floors. One human skeleton was found ; that of a man of middle age, who was doubled up in one corner of a room, as if crushed under the weight of the roof when it broke in. Much of his property had escaped destruction, and objects of various kinds were there ; vessels of lava and earthenware, grain, straw, bones of animals, tools of flint and of lava. There was no trace of metals ; not even a nail in the woodwork of the roof. The pottery is of several kinds. Large yellowish jars, holding some- times as much as twenty gallons, are the most common. They contained barley, pease, anise, &c., and are such as were usually employed in Greece for storing grain. Barley was found also piled up against the walls. A smaller kind of jars of a light colour ornamented with a red pattern present peculiarities which distinguish them from all Greek, Etruscan, or Egyptian pottery. There are but two examples of such ware in France, says M.

Fouque, one of which comes from the Syrian desert, the other from the neighbourhood of Autun, whither it was probably brought from the East through Marseilles. There is yet another kind, made of a fine, light-yellow earth, and adorned with spots and curved lines, or even with garlands of leaves. The execution of these shows great skill and taste on the part of the workman.

Other rougher vessels have been found, and some large troughs of lava, which seem to have been used for feeding animals. They were fixed in the ground ; some in the court, others in a room where were also some sheep-bones. Another lava vessel was pro- bably an oil press. Similar presses are still used in some islands of the Archipelago. Some hand-mills of lava were turned up consisting of two hemispherical blocks about 8 in. across ; the flat sides are worn as with use. In the thousands of years during which these have been hid, the islanders have so far improved on this, that they now put a wooden handle to the upper stone. There is another and more curious instance of the preservation of primitive methods of. manufacture. Some disks of lava were found, pierced in the centre. A faint groove running on each side from the hole to the edge of the disk, looked like the mark of a cord by which it had been suspended. M. Fouque could imagine no use for these till he learned that similar disks of stone are employed by the weavers for stretching their work upon the frame. With the disks were found some weights of lava, as well as a flint lance- head, and a sort of small saw, also of flint. These resemble the usual flint tools known to archteologists.

We have thus proof of the existence of a people who, although they had not yet learned to work in metals, had made considerable advance in civilization. They had domestic animals, some of them stall-fed ; they cultivated various kinds of grain ; they grew olives and pressed the oil. Even with their imperfect flint tools they had some skill as carpenters and masons, and constructed houses which must have been tolerably comfortable. Lastly, they had already a sea-going trade. Their pottery must have come from abroad, as the clay for its manufacture was not to be found in the island. The discoveries at Therasia have led to searches at Santorin, which have not been without success. The articles found there are of the same character as those dug out at Therasia, but some of them are proved by their position to be of a date subsequent to the deposit of the pumice. It is evident that the colonists who re-peopled the islands were in the same stage of civilization as those who perished in the eruption.

There can be no doubt that these islands once formed but one, in the midst of which rose the cone of a great volcano over 3,000 feet high. At some time in the distant past a tremendous and sudden eruption covered all its flanks with the layer of pumice which now forms the crust of Santorin and Therasia. Afterwards (we cannot tell how long, but we may suppose as a part of the same awful convulsion of nature) the mountain that had spread all this ruin around it broke away and sank down ; leaving, as it were, a great bowl, the edges of which were formed by a border of land now represented by the three islands. Through a breach in the north of this border the sea poured and filled the bay. Since then the volcanic powers have frequently been active. lathe year 196 B.C. an island rose in the middle of the bay, and quite lately, if we remember rightly, some rapid changes in the land were attracting considerable attention. M. Fouque indulges in some speculations as to the length of time through which these remains have been buried. This is a matter which we must leave to the learned in antiquities, who may be safely trusted to disagree upon it. We have only to express a hope that this strange opportunity of informing our- selves as to the habits of primmval man will not be last, and that England will take her part in aiding a search which cannot fail to be rewarded by the discovery of objects of great interest. Our readers will find much that we have been obliged to omit in the article from which this has been abridged.