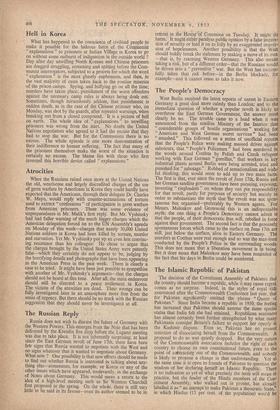 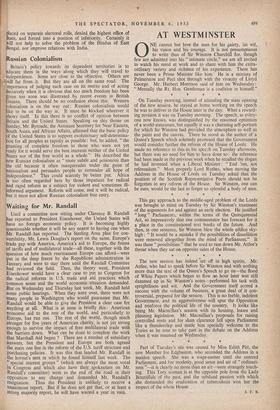 The Islamic Republic of Pakistan

The decision of the Constituent Assembly of Pakistan that the country should become a republic, while it may cause regret, comes as no surprise. Indeed, in the styles of royal title announced after the Commonwealth Conference last year, that for Pakistan significantly omitted the phrase " Queen of Pakistan." Since India became a republic in 1950, the feeling has increased that Pakistan should assume the same special status that India felt she had attained. Republican sentiment has almost certainly been further strengthened by what many Pakistanis consider Britain's failure to support her openly in the Kashmir dispute. Even so, Pakistan has no present intention of dissociating herself from the Commonwealth. A proposal to do so was quietly dropped. But the very nature of the Commonwealth association includes the right of each country to choose its own constitutional future, even to the point of contracting out of the Commonwealth, and nobody is likely to propose a change in that understanding. Yet at the same time it is open to friends of Pakistan to question the wisdom of her declaring herself an Islamic Republic. There is no indication as yet of what precisely the term will mean is practice, but the leader of the Hindu members of the Con- stituent Assembly, who walked out in protest, has already labelled it as." an attempt to make Pakistan a theocratic State," in which Hindus (13 per cent. of the population) wou!ci be placed onseparate electoral rolls, denied the highest office of State, and forced into a position of inferiority. Certainly it will not help to solve the problem of the Hindus of East Bengal, nor improve relations with India.