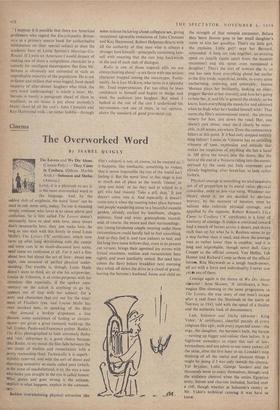 y ISABEL QUIGLY The Lovers and We Die Alone. (Cameo-Poly.) — They Came to Cordaro. (Odeon, Marble Arch.)—Solomon and Sheba. (Astoria.) LOVE, it is a platitude to say it, is the most overworked word in the language. And, by the oddest shift of emphasis, the word 'lover' can be used in one sense only, today. To use it meaning simply someone who loves is to cause alarm and confusion. So a film called The Lovers doesn't necessarily have to deal with love, since lovers don't necessarily love, they just make love. So long as you start with this firmly in mind Louis Malle's The Lovers ('X' certificate), which now turns up after long skirmishing with the censor and some cuts in its much-discussed love scene, need cause no confusion at all. For it isn't a film about love but about the act of love : about one night, one occasion of perfect physical under- standing. The trouble is, though, Louis Malle doesn't seem to think so; or else his scriptwriter, Louise de Vilmorin, is at cross-purposes with his intention. She especially, if the spoken com- mentary on the action is anything to go by, ,appears out of step with her subject; for a dory and characters that cry out for the •treat- ment of Flaubert (yes, and Louise Malle has given invoked him, in speaking of the film) —that demand a broken elopement, a lost illusion, some anticlimax of feeling or circum- stance—arc given a great romantic build-up, the full Tristan, Paolo-and-Francesca pother. Rodin's The Kiss, photographed to look extremely fleshy and 'real,' advertises it; a good choice because (like Rodin, to my mind) the film falls between the two stools of realism and romanticism with a pretty resounding thud. Technically it is superb : stylishly reserved, and with the sort of direct and disarming sensuality so easily called pure (which, in the sense of unadulterated, it is), the way a man who looks you straight in the eye is called honest, What grates and goes wrong is the attitude, implicit in what happens, explicit in the commen- tary.

Sudden overwhelming physical attraction (the film's subject) is not, of,course,, to be sneezed at : it happens, like toothache, something so violent, that it seems impossible the rest of the world isn't feeling it. But the word 'love' at this stage is just as much out of place as the words 'reason', or 'stop and think' or (as they said at school to a girl who had visions) 'Take a pill, dear.' It just doesn't come into it. And especially it doesn't come into it when the meeting takes place between two people wandering alone in a beautiful moonlit garden, already excited by loneliness, chagrin, jealousy, food and wine, gramophone records, and, of course, the moon and their surroundings: any young handsome couple meeting under those circumstances could hardly fail to feel something. And so they feel it, and race indoors to bed; and the long love scene follows that, even in its present cut version, brings their agonised joy across with lyrical exactness, realism and romanticism here rightly and most justifiably united. But (and here comes the flaw) before breakfast next morning they whisk off down the drive in a cloud of gravel, leaving the heroine's husband, home and child on the strength of that moonlit encounter. Before they leave Jeanne goes to her small daughter's room to kiss her goodbye. That's my little girl, she explains. Little girl? says her Bernard, astounded. A long car ride together; an evening spent en famine (quite apart from the moonlit encounter) and she never even mentioned a daughter! That's the sort of woman she is, as one has seen from everything about her earlier in the film (rude, superficial, brittle, in every sense uncharming, unloving, and unlovable: Jeanne Moreau plays her brilliantly, looking an older, puggier Bardot at her sourest); and how he's going to hate her, it, and life'in general (he already, as we know, hates everything she stands for and admires) when he finds what he's landed himself with! That seems the film's unintentional moral : the obvious misery for him, just down the road. Her, one doesn't care about, since she'd clearly be miser- able, in all senses, anywhere. Even the commentary falters at this point. If it had only stopped entirely long before! Louise de Vilmorin has an unfailing triteness of tone, expression and attitude that makes me suspicious of anything she has a hand in. Off drive the lovers into the dawn, like the hero'at the end of a Western riding into the sunset; pursued by the same pat little comments and already beginning, after breakfast, to look rather forlorn.

Physical courage is something we tend to.admire out of all proportion to its moral value: physical cowardice, more or less vice versa. Whatever our theory about it, we are dazzled by obvious bravery, by the moment of heroism, even by nations who cultivate physical courage; and appalled by the opposite. Robert Rossen's They Came to Curdling ('A' certificate) is a kind of anatomy of courage. It makes a convicted coward lead a bunch of heroes across a desert, and show each man up for what he is. Realism seems to go a step farther than it need, and show the average man as rather lower than is credible; and it is long and improbable, though never dull. Gary Cooper as the official coward, Van Heflin, Tab Hunter and Richard Conte as three of the official heron, Rita Hayworth as a tough ranch-owner, all act with a force and individuality I never saw yet itn any of them.

Courage again is the theme of We Die Alone (director : Arne Skouen; 'A' certificate), a Nor- wegian film showing in the same programme as The Lovers, the true story of one man's escape after a raid from the Shetlands to the north of Svorway in 1943, told with the speed of a thriller and the authentic look of documentary.

Last, Solomon and Sheba (director : King Vidor; 'A' certificate), cheerful parody of every religious film epic, with every expected scene—the orgy, the slaughter, the heroine's bath, the harem --turning up bigger and noisier than before. It is highbrow nowadays to enjoy this sort of low- browedness, and not admit to too many yawns; all the same, after the first hour or so, I couldn't stop thinking of all the useful and pleasant things I might be doing if I was only outside the cinema. Yul Brynner, Lollo, George Sanders and the thousands seem to enjoy themselves, though; and the audience cheered when the entire Egyptian army, horses and chariots included, hurtled over a cliff, though whether at Solomon's victory or Mr. Vidor's technical cunning it was hard to know.