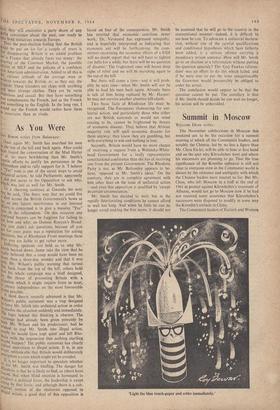 11.0 BARON writes from Bulawayo: , (Thee again Mr. Smith has marched his men the top of the hill and back again. Alice could '"ve found the conversation of the Mad Hatter ref at no more bewildering than Mr. Smith's 'rOtic efforts to justify his persistence in the r(=ferendum and to rally support for it. 'I believe 'Yes" vote is one of the surest ways to avoid ilnilateral action,' he told Parliament; apparently ,„11,did not occur to the Opposition to ask why, 7ich was just as well for Mr. Smith. ro a cheering audience at Gwanda the next he said, 'The finest way that we could fire lint across the British Government's bows as as any future interference in our internal 4v"'sirs is cOncerned is to give a massive "Yes" "le in the referendum.' On this occasion any e"nfused hearers can be ,forgiven for failing to 41 how and why; on Damon Runyan's Broad- you didn't ask questions, because all you got for your pains was a reputation for asking 4dti"lions, but at Rhodesian Front meetings these aYs you are liable to get rather more. s )iffering opinions are held as to why Mr.' ,ntith backed down. Some take the view that he 'QailV believed that a coup would have been no 41t)re than a three-day wonder and that it was 1,t)11.1Y Mr. Wilson's public warning that turned g„Irti back from the top of the hill; others hold lbilat his whole campaign was a bluff designed, the threat of presenting Britain with a i'luation which it might require force to Meet, ,! secure independence on the most favourable 'Ili% possible. , A third theory recently advanced is that Mr. ivVilson's public statement was a trap designed 1° force Mr. Sthith into unilateral action in order i?Jeselve the situation suddenly and immediately. wge logic behind this thinking is obscure. The b,airktlings had already been given privately by Mr. Wilson and his predecessor; had he ,'"sned to trap Mr. Smith into illegal action, 14trelY he would have kept quiet and left Rho- 1„esia With the impression that nothing startling r'(,),old happen? The public statement has clearly "led Opposition to illegal action. It is, in any vent, unthinkable that Britain would deliberately 14e4. pi tate a crisis which tnight yet be avoided. It is no longer important to speculate whether or not Mr. Smith was bluffing. The danger for 11(}desia is that he is likely to find, as others have ()WA, that when blind emotion is harnessed to .0,;.oduce a political force, the leadership is swept 4"11g by that force; and although there is a sub-

section of the electorate opposed to

e141 action, a good deal of this opposition is

based on fear of the consequences. Mr. Smith has retorted that economic sanctions never work; Dr. Verwperd has expressed sympathy, and is hopefully interpreted as indicating that economic aid will be forthcoming; the com- mittees examining the economic effects of a U DI will no doubt report that 'we will have to tighten our belts for a while, but there will be no question of disaster.' The frightened ones will heave deep sighs of relief and we will be marching again to the top of the hill.

But there will come a time—and it will prob- ably be next time—when Mr. Smith will not be able to lead his men back again. Already there is talk of him being replaced by Mr. Harper; he may not survive another abortive hill-climb.

• Two basic facts of Rhodesian life must be recognised. The Europeans clamouring for uni- lateral action, and particularly those who either are not 'British nationals or would not mind ceasing to be, cannot be frightened by threats of economic disaster. They believe that African majority rule will spell economic disaster for them anyway; they know they are gambling, but with everything to win and nothing to lose.

Secondly, Britain would have no more chance of receiving a request from a Welensky-White- head Government for a really representative constitutional conference than she has of receiving one from the present Government. The Rhodesia Party is not, as Mr. Bottomley appears to be- lieve, 'opposed to Mr. Smith's ideas.' On the contrary, they are in complete agreement with him other than on the issue of unilateral action —and even this opposition is qualified by 'except in certain circumstances.'

Mr. Smith has decided to wait, but in the rapidly deteriorating conditions he cannot afford to wait too long. And when he feels he can no longer avoid making the first move, it should not be assumed that he will go to the country in the conventional manner—indeed, it is difficult to see how he can. To advocate a unilateral declara- tion, without any of the careful qualifications and conditional hypotheses which have hitherto been added, is a serious offence carrying a mandatory prison sentence. How will Mr. Smith go to an election or a referendum without putting the question squarely? The 'Guy Fawkes referen- dum' was an effort to do this ,which failed, and if he were ever to put the issue unequivocably the Governor would presumably be obliged to order his arrest.

The conclusion would appear to be that the question cannot be put. The corollary is that if Mr. Smith should decide he can wait no longer, his action will be unheralded.