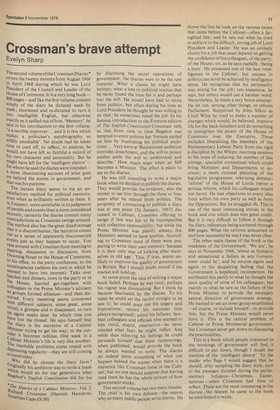 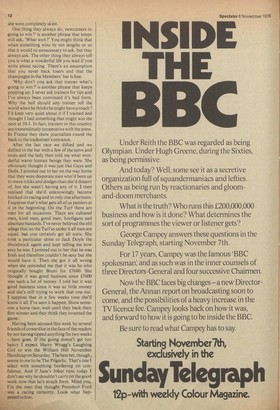 The second volume of the Crossman Diaries* covers the twenty months from August 1966 to April 1968 during which he was Lord President of the Council and Leader of the House of Commons. It is a very long book800 Pages—and like the first volume consists simply of the diary he dictated week by Week; shortened and re-dictated to turn it iMO intelligible English, but otherwise exactly as it spilled out of him. 'Memory', he said in his introduction to the first volume, Is a terrible improver. . . and it is this which makes a politician's autobiography so Wildly unreliable'. No doubt had he taken time to cool off, to reflect, to analyse, he would not have left so faithful a record of his own character and personality. But he might have left for the 'intelligent elector'— for whom he said the diaries were intended_ a more illuminating account of what goes on behind the scenes in government ; and that was his purpose.

The instant diary seems to me an unsatisfactory method for political memoirs, eve . n when as brilliantly written as these. It

ls, I suspect, more unreliable in its judgments of People and events than a more considered account ; certainly the diaries contain many Contradictions as Crossman swings around. The method also has the great disadvantage that it is discontinuous; the narrative comes out as a series of apparently disconnected events just as they happen to occur. You race around with Crossman from meeting to meeting, discussion to discussion, from '-'owning Street to the House of Commons, to his office, to the party conference, to the constituencies (seldom his own in which he seemed to have lost interest). Talks over lunches and dinners, rows in the party or in the House, hurried get-togethers with Colleagues or the Prime Minister's advisers as groups formed alliances—and then dissolved. Every meeeting seems concerned

With different subjects, some great, some trivial, a glimpse and it disappears, to turn alp again weeks later, by which time you

have lost the thread. He says himself that the diary is the narrative of a Cabinet

Minister trying to get his way; to the out scider it becomes tedious. One week in a _ abinet Minister's life is very like another.

I'd he insoluble problems come round with ePressing regularity—they are still coming around today.

WhY did he choose the diary form? 'riginally his ambition was to write a book

nich would do for our generation what uagehot's English Constitution did for his by disclosing the secret operations of government ; the diaries were to be the raw material. What a classic he might have written; what a loss to political science that he never found the time for it and perhaps lost the will. He would have had to retire from politics; but often during his time as Lord President he thought he was willing to do that ; he sometimes hated the job. In his famous introduction to the Fontana edition of The English Constitution Crossman tells us that from time to time Bagehot was tempted to enter politics but `fortune smiled on him by frustrating his political ambitions ... Very soon at Westminster ambition corrodes detachment, and the will to power pushes aside the will to understand and describe.' How much truer when an MP becomes a Minister. The effect is plain to see in the diaries.

He was still intending to write a major book when he decided to publish the diaries. They would provide the evidence; also the money to see him through the three or four years after he retired from politics. The propriety of contracting to publish a diary was at one point (26 January, 1967) discussed in Cabinet, Crossman offering to resign if this was felt to be incompatible with collective responsibility; but while the Prime Minister was plainly uneasy, few Ministers seemed to have qualms. According to Crossman most of them were preparing to write their own memoirs `because it is their only way of looking after themselves in old age'. This, if true, seems unlikely to improve the quality of government in Britain. But I should doubt myself if the market will hold up.

At some point the idea of writing a major book faded. Perhaps he was tired; perhaps his vigour was diminishing. But I think he became fascinated by the diaries. To his tapes he could set the record straight as he saw it; he could pour out his angers and frustrations; record his successes (not always recognised); admit his failures; lam

bast colleagues and officials who seemed to him timid, stupid, obstructive—he never minded what hurt he might inflict. And while thus relieving his feelings he could persuade himself that these outpourings, when published, would provide the book he always wanted to write. The diaries do indeed show something of what can happen behind the scenes when there is a maverick like Crossman loose in the Cabinet ; but no one should suppose that having read them he has the whole picture of how government works. This second volume has two main themes. The chief is his own defence—the reason why so many public people write diaries. He shows the line he took on the various issues that came before the Cabinet—often a far sighted line; and he sets out what he tried to achieve in the difficult, roving job of Lord President and Leader. He was an unlikely choice for a job that must depend on getting the confidence of his colleagues, of the party, of the House; on, as he says ruefully, 'being a bore'. He possessed one of the best intel ligences in the Cabinet; but success in politics can never be achieved by intelligence alone. He recognises that his personality was wrong for the job; too expansive, he says, but others would use a harsher word.

Nevertheless, he made a very brave attempt. He set out, among other things, to reform Parliament. Supported by John Silkin as Chief Whip he tried to make a number of changes which would, he believed, improve life for the back-benchers and do something to strengthen the power of the House of Commons over the Executive. These included liberalising the members of the Parliamentary Labour Party from too rigid a discipline by the Whips; morning sessions in the hope of reducing the number of late sittings; specialist committees which could bring Ministers and Departments to account ; a more rational planning of the legislative programme; televising debates; `reform' of the House of Lords (never a serious reform, which his colleagues would not have). He met objections to every idea from within his own party as well as from the Opposition. But he struggled o'n. This is one of the most interesting stories in the book and one which does him great credit. But it is very difficult to follow it through the diary, references being scattered through 800 pages. What the reforms amounted to and how successful he was I was never clear.

The other main theme of the book is the weakness of the Government. 'We are', he says in November 1966, 'about as fantastic and sensational a failure as any Government could be'; and he returns again and again to his despairing feeling that the Government is hopelessly incompetent. He attributed this partly to what he thought the poor quality of some of his colleagues; but mainly to what he saw as the failure of the Prime Minister to provide the necessary central direction of government strategy. He wanted to see an inner group established —of course, to include himself—to provide this; but the Prime Minister would never have it. This is the central problem of Cabinet or Prime Ministerial government, but Crossman never got down to discussing the practicalities.

This is a book which people interested in the workings of government will find it difficult to put down, though I doubt the stamina of the 'intelligent elector'. To the reader who flags I would suggest that he should, after sampling the diary style, turn to the passages dictated during the parliamentary holidays—Christmas, Easter, summer—when Crossman had time to reflect. These are the most interesting in the diaries—the nearest he came to the book he once hoped to write. she went completely skint.

One thing they always do, newcomers to going to win ?' is another phrase that keeps still ask, 'What won ?' You might think that when something wins by ten lengths or so that it would ne unnecessary to ask, but they always ask. The other thing they always tell you is what a wonderful life you lead if you write about racing. There's an assumption that you never back losers and that the champagne in the Members' bar is free.

'Why don't you ask that trainer what's going to win ?' is another phrase that keeps popping up. I never ask trainers for tips and I've always been convinced it's bad form. Why the hell should any trainer tell the world when he thinks he might have a touch ? I'd keep very quiet about it if I trained and thought I had something that might win the next at 10-1. In fact, trainers in this country are tremendously cooperative with the press. In France they show journalists round the back to the tradesmen's entrance.

After the last race we dillied and we dallied in the bar with a few of the spivs and touts and the lady then told me what wonderful warm human beings they were. She obviously thought it was just like Guys and Dolls. I pointed out to her on the way home that they were desperate men who'd been up to more tricks and dodges than she'd dreamt of, but she wasn't having any of it. I then realised that she'd unknowingly become hooked on racing and in only one afternoon. I suppose that's what gets all of us punters at it in the beginning. On the Turf there are men for all occasions. There are cultured men, kind men, good men, hooligans and absolute bastards. I've never believed the old adage that on the Turf as under it all men are equal, but you certainly get all sorts. She took a particular shine to Jack Doyle the bloodstock agent and kept telling me how sexy he was. I pointed out to her that he was Irish and therefore couldn't be sexy but she would have it. Then she got it all wrong when she reminded me that it was he who originally bought Bruni for £7600. She thought it was good business since £7600 was such a lot of money. I told her it was good business since it was so little money and she's still trying to work that one out. I suppose that in a few weeks time she'll know it all I've seen it happen. Show someone a horse race, wait until they back their first winner and they think they invented the game.

Having been accused this week by several friends of cowardice in the face of the readers by not having tipped anything for two weeks —here goes. If the going doesn't get too heavy I expect Harry Wragg's Laughing Girl to win the William Hill November Handicap on Saturday. The best bet, though, seems to me to be The Pilgarlic. That's one I select with something bordering on confidence. And if Jane's Joker runs today T don't see why he shouldn't carry on the good work now that he's struck form. Mind you, I'm the man that thought President Ford was a racing certainty. Look what happened to him.