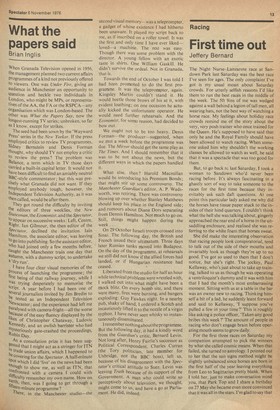 What the papers said

When Granada Television opened in 1956, the management planned two current affairs Programmes of a kind not previously offered to viewers. One was Under Fire, giving an audience in Manchester an opportunity to question and heckle two individuals in London, who might be MPs, or representatives of the AA, the FA or the RSPCA—any organisation which was London-based. The Other was What the Papers Say, now the longest-running TV series; unbroken, so far as I know, except for strikes.

The seed had been sown by the `Wayward Press' series in the New Yorker. If the press employed critics to review TV programmes, Sidney Bernstein and Denis Forman thought, why should TV not employ a critic to review the press? The problem was Balance, a term which in TV those days carried ir built-in capital letter. it would not have been difficult to find an amiably neutral BBC-style commentator; but this was precisely what Granada did not want. If they employed anybody tough, however, the Independent Television Authority, as it was then called, would be after them.

They got round the difficulty by inviting the editors of three weeklies, the New Statesman, the Economist, and the Spectator, to appear on successive weeks: Left, Centre, Right. Ian Gilmour, the then editor of the SPectator, declined the invitation. fain Hamilton, the associate editor, was leaving to go into publishing. So the assistant editor, who had joined only a few months before, caught the Manchester train one day that autumn, with a dummy script, to undertake a 'dry run'.

I have four clear visual memories of the Process of launching the programme; the first being of that railway journey, while I was trying desperately to memorise the script. A year before I had been one of several journalists invited by Jim Bredin to be tested as an Independent Television Newscaster; and the experience had left me paralysed with camera-fright—all the worse

e. cause of the easy fluency displayed by the likes of Christopher Chataway, Ludovic kennedy, and an owlish barrister who had MYsteriously gate-crashed the proceedings, Robin Day. As a consolation prize it has been sugested that I might act as a stringer for ITN Ut trade union affairs, which I happened to °e covering for the Spectator. A half-minute Spot which I did `live' on the news had been enough to show me, as well as ITN, that c.Onfronted with a camera I could with difficulty remember my own name. How on earth, then, was I going to get through a teen-minute programme ?

There, in the Manchester studio—the second visual memory—was.a teleprompter, a gadget of whose existence I had hitherto been unaware. It played my script back to me, as if inscribed on a roller towel. It was the first and only time I have ever likedloved—a machine. The rest was easy. Though there was some problem with the director. A young fellow with an exotic taste in shirts. One William Gaskill. He didn't survive the ordeal. Not in Granada, that is.

Towards the end of October I was told I had been promoted to do the first programme. It was the teleprompter, again. Kingsley Martin couldn't stand it. He would beetle those brows of his at it, with evident loathing; on one occasion he actually kicked the unfortunate operator. He would need further rehearsals. And the Economist, for some reason, had decided to bow out.

We ought not to be too heavy, Denis Forman—the producer—suggested, when we met a week before the programme was due. The Mirror should get the same play as The Times. And I should remember that it was to be not about the news, but the different ways in which the papers handled it.

What else, then ? Harold Macmillan would be introducing his Premium Bonds; that might stir up some controversy. The Manchester Guardian's editor, A. P. Wadsworth, was retiring. There was controversy blowing up over whether Stanley Matthews should keep his place in the England side; and rumours about Diana Dors separating from Dennis Hamilton. Not much to go on. Still, things might happen during the week. . .

On 29 October Israeli troops crossed into Sinai. The following day, the British and French issued their ultimatum. Three days later Russian tanks moved into Budapest. On the day of the programme, at rehearsals we still did not know if the allied forces had landed, or if Hungarian resistance had ceased.

Liberated from the studio for half an hour while technical problems were wrestled with, I walked out into what might have been a mock blitz. On every bomb site, and there were many, fires were burning, and bangers exploding: Guy Fawkes night. In a nearby pub, shaky of hand, I ordered a Scotch and incautiously lifted it to the nozzle of a virgin syphon. I have never seen whisky so instantaneously disseminated.

I remember nothing about theprogramme. But the following day, it had a kindly word from the Guardian's critic, Bernard Levin. Not long after, Henry Fairlie's successor as Political Correspondent, Charles Curran (the Tory politician, late member for Uxbridge, not the BBC boss), left us, because of his disagreement with the Spectator's critical attitude to Suez. Levin was leaving Truth because of its support of the Government. A man who could write so perceptively about television, we thought, might come to us

ment. He did, indeed.