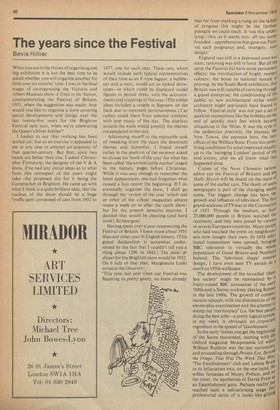 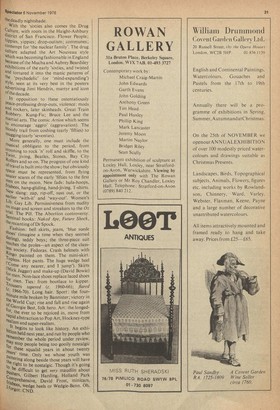 The years since the Festival

When you are in the throes of organising one big exhibition it is not the best time to be asked whether you will organise another for little over six months' time. I was in the final stages of co-organising the Victoria and Albert Museum show A Tonic to the Nation, commemorating the Festival of Britain, 1951, when the suggestion was made: how would you like to organise a show covering social developments and design over the last twenty-five years for the Brighton Festival next year, when we're celebrating the Queen's Silver Jubilee ?

I hasten to say that nothing has been settled yet ; but as an exercise it appealed to me in any case to attempt an anatomy of that quarter-century. But first, since two heads are better than one, I asked Christopher Firmstone, the designer of the V & A show, if he had any initial ideas as to what form this retrospect of the years might take—the proposed site for it being the Cornmarket in Brighton. He came up with what I think is a quite brilliant idea, that the nucleus of the show should be a huge 'traffic-jam' composed of cars from 1952 to 1977, one for each year. These cars, which would include such typical representatives of their time as an E-type Jaguar, a bubblecar and a mini, would act as locked showcases—in which could be displayed model figures in period dress, with the accoutrements and trappings of the year. (The wilder ideas included a couple in flagrante on the back seat to represent permissiveness.) Car radios could blare from selected windows with pop music of the day. The displays around the walls would amplify the themes encapsulated in the cars.

Addressing myself to the enjoyable task of tweaking from the years the dominant themes and leittnotive, I found myself rather in the position of the reviewer asked to choose his 'book of the year' for what has been called 'the annual cattle market' staged in the literary pages before Christmas. While it was easy enough to remember the latest appearances, one had forgotten what caused a fuss nearer the beginning. If I do eventually organise the show, I shall go through the 'review of the year' which one or other of the colour magazines always issues a week or so after the cattle show; but for the present tentative exercise, I decided that would be cheating (and hard work). So here goes.

Having spent over a year resurrecting the Festival of Britain, I knew more about 1951 than any other year in English history. (This grand declaration is somewhat undermined by the fact that I couldn't tell you a thing about 1296 or 1843.) The point de depart for the Brighton show would be 1952. On 6 July of that year, Marghanita Laski wrote in the Observer: 'This time last year when our Festival was flaunting its pretty gaiety, we knew already

that far from marking a rung on the ladder of progress this might be the furthest pinnacle we could reach. It was this underlying—this, as it seems now, all too surelY founded—apprehension that gave our Festival such poignancy and, strangely, such delight.'

England was still in a depressed post-war state; rationing was still in force. But all the same the Festival did have some permanent effects: the introduction of bright, nursed colours; the boost to national morale In proving, by the South Bank exhibition, that Britain was still capable of carrying through a grand enterprise; the conditioning of the public to new architectural styles which architects might previously have feared t° follow. 'Festival style' was not just a set of quirkish mannerisms like the bobbles on the end of spindly, chair feet which became ubiquitous in the 'fifties. It was the style of the pedestrian precincts, the piazzas, the New Towns, the espresso bars, the new offices of the Welfare State. From this point, living conditions for most improved steadilY up to the 'swinging London' period of the mid-'sixties; and we all know what has happened since.

Copies of the News Chronicle (whose editor ran the Festival of Britain) and the Daily Sketch will be found on the seats of some of the earlier cars. The death of sonle newspapers is part of the changing media scene. The biggest change has been the growth and influence of television. The first grand-scale use ofTV was at the Coronation of 1953. Through the medium, at least 25,000,000 people in Britain watched the ceremony, and they were joined by viewers in several European countries. Many peoPle, who had watched the event on neighbours . sets now bought their own. In 1958 additional transmitters were opened, bringing BBC television to virtually the Whole population of Great Britain and Northern Ireland. The 'television shape' entered design; I have even seen TV aerials as a motif on 1950s wallpaper.

The development of the so-called 'class' less society' might be represented bY ,a fruity-voiced BBC announcer of the earl 1950s and a Surrey cockney playing Rorrle° in the late 1960s. The growth of comPrehensive schools, with the elimination of the eleven-plus examination and the attempt t,c) stamp out `meritocracy' (i.e. the best peoPle doing the best jobs—a pretty logical systelpi in my view), is obviously an ,importan ingredient in the spread of 'classlessness' In the early 'sixties you get the beginnings of the Satire movement, starting with al! Oxford magazine Mesopotamia (of whIej,' William Rushton was the star cartoornsti; and proceeding through Private Eye, BeYon° the Fringe, That Was The Week That Was' 'The Establishment' club and Lennie Brae to its bifurcation into, on the one hand, the wilder fantasias of Monty Python, and 0° the other, the apotheosis of David Frost as, an Establishment guru. Perhaps reality ha't reached such a self-satirising stage tha professional satire of it looks like gilding

With the 'sixties also comes the Drug

Culture, with roots in the Haight-Ashbury district of San Francisco. Flower People; hiPPies, yippies; drop-outism; communes; Contempt for 'the nuclear family'. The drug Culture adapted the Art Nouveau style Which was becoming fashionable in England because of the Mucha and Aubrey Beardsley exhibitions of the early 'sixties, and twisted and tortured it into the manic patterns of the 'psychedelic' (or 'mind-expanding') Style, seen at its very best in the posters advertising Jimi Hendrix, martyr and icon Of the decade.

More generally, one must include the Musical obbligato to the period, from crooning to rock 'n' roll and skiffle, to the Twist, jiving, Beatles, Stones, Bay City Rollers and so on. The progress of one kind "travel is built into the show; but obviously sPace must be represented, from flying saucer scares of the early 'fifties to the first Men on the moon. New fads: hula-hoops, frisbees, hang-gliding, hand-jiving, T-shirts. New slang: zap, rip-off, suss out, or the earlier 'with-it'and `way-out'. Women's ilb. Gay Lib. Permissiveness from nudity en stage and screen and streakers to the Oz trial. The Pill. The Abortion controversy. Seminal books: Naked Ape, Future Shock, the recanting of Dr Spock. Fashion: bell skirts, jeans, 'blue suede sdhc'es' (imagine a time when they seemed 'arin8), teddy boys; the three-piece suit r,caches the proles—an aspect of the classless society. Fedoras. Crash helmets with ingo painted on them. The mini-skirt. (1,0131ess. Hot pants. The huge wedge heel ‘, Come any nearer, and 1 jump'). Skirts `f.14lek Jagger) and make-up (David Bowie) fel. men. Non-lace shoes replace laced shoes -i.?r men. Ties: from bootlace to kipper. ( rousers tapered (c. 1960-66); flared 1966-70). Long hair. Sport : the fourtnI,InUte mile broken by Bannister; victory in ge World Cup; rise and fall and rise again rGeorgia Best, folk hero. Art : the longed ever to be rejoiced in, move from vranid abstraction to Pop Art, Hockney-type callsm and super-realism. 1.t begins to look like history. An exhireltion held next year, and run by people who 11 „e ..'ember the whole period under review, i!lay stop people being too gooily nostalgic y()Ar these squalid years in about twenty :ars' time. Only we whose youth was it,,attering along beside those years will have to rle right to be nostalgic. Though it's going Dh be difficult to get very maudlin about eshers, Gilbert Harding, Holland Park f.,°b'Prehensive, David Frost, minicars, if,sbees, wedge heels or Wedgie-Benn. Oh. °Not CND.