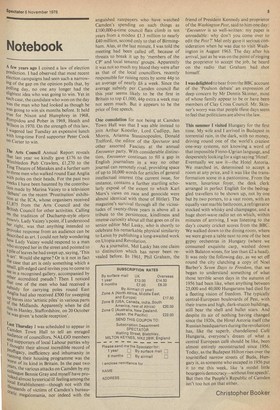 A few years ago I coined a law of election prediction. I had observed that most recent election campaigns had seen such a narrowing of the gap on the opinion polls that, by Polling day, no one any longer had the slightest idea who was going to win. Yet in each case, the candidate who won on the day was the man who had looked as though he was going to win six months before. It held true for Nixon and Humphrey in 1968, Pompidou and Poher in 1969, Heath and Wilson in 1970. On the strength of this law, I wagered last Tuesday an expensive lunch With long-time Ford supporter Peter Cook O n Carter to win.

The Arts Council Annual Report reveals that last year we kindly gave £176 to the Wimbledon Pub Crawlers, £1,270 to the Ting Theatre of Mistakes and a further sum to three men who walked round East Anglia With poles on their heads. For the past two Weeks I have been haunted by the contribution made by Marina Vaizey to a television 'debate' on the recent `Prostitution' exhibition at the ICA, whose organisers received E1,875 from the Arts Council and the British Council for other activities. Calling °n the tradition of Duchamp-style objets trouves, Lady Vaizey's point, if I understood her right, was that anything intended to Provoke response from an audience can be described as art. I could not help wondering hOW Lady Vaizey would respond to a man P"ho stopped her in the street and pointed to Pile of leaves he had swept up, saying, `This is art'. Would she agree? Or is it not in fact the case that art is only something which a striall gilt-edged card invites you to come to see in a recognised gallery, accompanied by other accredited pseuds? Then I noticed that one of the men who had received a sAtibsidY for carrying poles round East 'Anglia had also received £500 for sweeping PO leaves into `artistic piles' in various parts °I. the Midlands. Apparently when he did thhis in Hanley, Staffordshire, on 20 October e was given `a hostile reception'.

1;ast Thursday I was scheduled to appear in ‘-aniden Town Hall to tell an enraged audience of councillors, NALGO members rd supporters of local Labour parties why n thought their almost incredible record of 17hr°f1i8aoY, inefficiency and inhumanity in ;fining their housing programme was the y orst of its kind in Britain. In the past two ce4rs, the various attacks on Camden by my vcilii.eague Bennie Gray and myself have pro "d almost hysterical ill feeling among the t-hcal Establishment—though not with the crNsands of victims of Camden's bureau atic megalomania, nor indeed with the anguished ratepayers who have watched Camden's spending on such things as £100,000-a-time council flats climb in ten years from a modest £1.3 million to nearly £40 million, second only to that of Birmingham. Alas, at the last minute, I was told the meeting had been called off, because of threats to break it up by `members of the CP' and local tenants' groups. Apparently it was not so much my blood they were after as that of the local councillors, recently responsible for raising rents by some 44p to an average of nearly £6 a week. Since the average subsidy per Camden council flat this year seems likely to be the first in Britain to top £1,000, 44p extra a week may not seem much. But it appears to be the price of free speech.

One consolation for not being at Camden Town Hall was that I was able instead to join Arthur Koestler, Lord Cudlipp, Jan Morris, Arianna Stassinopoulos, Donald Trelford, the editor of the Spectator and other assorted Fascists at the annual Encounter party. With considerable distinction, Encounter continues to fill a gap in English journalism in a way no other journal can remotely rival, providing space of up to 10,000 words for articles of general intellectual interest (the current issue, for instance, contains a further startling scholarly exposé of the extent to which Karl Marx's views on race and genocide were almost identical with those of Hitler). The magazine's survival through all the vicissitudes of twenty-three years is above all a tribute to the persistence, kindliness and intense curiosity about all that goes on of its senior editor Mel Lasky, who is shortly to celebrate his remarkable physical similarity to Lenin by publishing a long-awaited work on Utopia and Revolution.

As a journalist, Mel Lasky has one claim to distinction which has never been revealed before. In 1961, Phil Graham, the friend of President Kennedy and proprietor of the Washington Post, said to him one day : 'Encounter is so well-written : my paper is unreadable: why don't you come over to edit the Post?' Mel only gave it serious consideration when he was due to visit Washington in August 1963. The day after his arrival, just as he was on the point of ringing the proprietor to accept the job, he heard on the radio that Graham had shot himself.

I was delighted to hear from the BBC account of the `Poulson debate' an expression of deep concern by Mr Dennis Skinner, most of whose family appear to be or have been members of Clay Cross Council. Mr. Skinner's worry was that people tliese days seem to feel that politicians are above the law.

This summer I visited Hungary for the first time. My wife and I arrived in Budapest in torrential rain, in the dark, with no money, driving round one of the world's craziest one-way systems, not knowing a word of that impossible Finno-Ugrian language, and desperately looking for a sign saying 'Hotel'. Eventually we saw it—the Hotel Astoria. We marched in, determined to accept a room at any price, and it was like the transformation scene in a pantomime. From the warm, luxurious foyer, the desk clerk arranged in perfect English for the bedraggled travellers to be shown up, not by one but by two porters, to a vast room, with an equally vast marble bathroom, a refrigerator stocked with whisky and champagne, and a huge short-wave radio set on which, within minutes of arriving, I was listening to the day's county cricket scores from the BBC. We walked down to the dining room, where we were given a table next to one of the best gypsy orchestras in Hungary (where we consumed exquisite carp, washed down with Balaton wines, for less than £2 a head). It was only the following day, as we set off round the city clutching a copy of Noel Barber's Seven Days to Freedom, that we began to understand something of what those terrible seven days in the autumn of 1956 had been like, when anything between 25,000 and 40,000 Hungarians had died for a fleeting vision of freedom. The typically central-European boulevards of Pest, with their trams and high, dark-stucco buildings, still bear the shell and bullet scars. And despite its air of nothing having changed since the 1920s, the Hotel Astoria itself (the Russian headquarters during the revolution) has, like the superb, chandeliered Café Hungaria, everyone's dream of what a central European café should be like, been almost entirely reconstructed since 1956. Today, as the Budapest Hilton rises over the touristified narrow streets of Buda, Hungary is, as someone who escaped in 1956 put it to me this week, like `a model little bourgeois democracy—without free speech'. But then the People's Republic of Camden isn't too hot on that either.