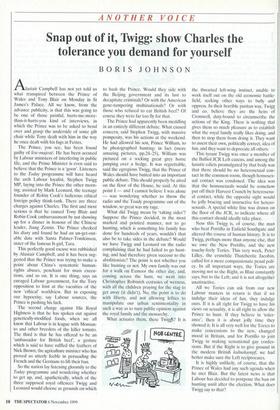 Snap out of it, Twigg: show Charles the tolerance you demand for yourself

Aastair Campbell has not yet told us what transpired between the Prince of Wales and Tony Blair on Monday in St James's Palace. All we know, from the advance publicity, is that this was going to be one of those painful, hurts-me-more- than-it-hurts-you kind of interviews, in which the Prince was to be asked to bend over and grasp the underside of some gilt chair while Tony dealt with him in the way he once dealt with his fags at Fettes.

The Prince, you see, has been found guilty of le.se-majeste. He has been accused by Labour ministers of interfering in public life, and the Prime Minister is even said to believe that the Prince is a 'goon'. Listeners to the Today programme will have heard the arch Labour loyalist, Stephen Twigg MP, laying into the Prince the other morn- ing, assisted by Mark Leonard, the teenage founder of Robin Cook's ludicrous ethical foreign policy think-tank. There are three charges against Charles. The first and most serious is that he caused Tony Blair and Robin Cook embarrassment by not showing up for a dinner in honour of the Chinese leader, Jiang Zemin. The Prince checked his diary and found he had an un-get-out- able date with Santa Palmer-Tomkinson, sister of the famous It-girl, Tara.

This perfectly good excuse was rubbished by Alastair Campbell, and it has been sug- gested that the Prince was trying to make a point about China's systematic human- rights abuses, penchant for mass execu- tions, and so on. It is one thing, says an enraged Labour government, for the Tory opposition to hint at the vacuities of the new 'ethical' worldview. But in exposing our hypocrisy, say Labour sources, the Prince is pushing his luck.

The second charge against His Royal Highness is that he has spoken out against genetically-modified foods, when we all know that Labour is in league with Monsan- to and other breeders of the killer tomato. The third is that he has offered to be an 'ambassador for British beef, a gesture which is said to have ruffled the feathers of Nick Brown, the agriculture minister who has proved so utterly feeble in persuading the French and the Germans to lift their ban.

So the nation lay listening gloomily to the Today programme and wondering whether to get up, and, apathetically, which of the three supposed royal offences Twigg and Leonard would choose as grounds on which

to bash the Prince. Would they side with the Beijing government and its lust to decapitate criminals? Or with the American gene-tampering multinationals? Or with those who refused to eat British beef? Of course they were far too fly for that.

The Prince had apparently been meddling in an entirely different debate. What caused concern, said Stephen Twigg, with massive pomposity, was his actions at the weekend. He had allowed his son, Prince William, to be photographed hunting; in fact (more amazing pictures, pp.24-25), William was pictured on a socking great grey horse jumping over a hedge. It was regrettable, said the egregious Twigg, that the Prince of Wales should have butted into an important public debate. This should properly be aired on the floor of the House, he said. At this point I — and I cannot believe I was alone — was wondering whether to throw the radio and the Toady programme out of the window, so great was my rage.

What did Twigg mean by 'taking sides'? Suppose the Ptince decided, in the most marked and pointed manner, not to go hunting, which is something his family has done for hundreds of years, wouldn't that also be to take sides in the debate? Would we have Twigg and Leonard on the radio complaining that he had failed to go hunt- ing, and had therefore given succour to the abolitionists? The point is not whether you like hunting or not. My own family was out for a walk on Exmoor the other day, and, coming across the hunt, we went into Christopher Robinish ecstasies of wetness, with all the children praying for the stag to get away (it didn't). No, the point is to do with liberty, and not allowing lefties to manipulate our urban sentimentality in such a way as to turn public opinion against the royal family and the monarchy.

What actuates them, these Twiggs? It is

the thwarted left-wing instinct, unable to work itself out on the old economic battle- field, seeking other ways to bully and oppress. In their horrible puritan way, Twigs and co. believe they are the heirs of Cromwell, duty-bound to circumscribe the actions of the King. There is nothing that gives them so much pleasure as to establish what the royal family really likes doing, and then to stop them from doing it. They want to assert their own, politically correct, idea of fun, and they want to deprecate all others.

This tyrant Twigg was once a member of the Balliol JCR Left caucus, and among the lunatic edicts promulgated by that body was that there should be no heterosexual con- tact in the common room, though homosex- ual contact was condoned. The idea was that the homosexuals would be somehow put off their Harvest Crunch by heterosexu- al contact, while the opposite sight would he jolly bracing and instructive for hetero- sexuals. A special white line was drawn on the floor of the JCR, to indicate where all this contact should ideally take place.

Now this Twigg is, of course, the man who beat Portillo in Enfield Southgate and altered the course of human history. It is to Twigg, perhaps more than anyone else, that we owe the New Portillo, and the new touchy-Feely Tories. This very week, Peter Lilley, the erstwhile Thatcherite Jacobin, called for a more compassionate penal poli- cy. In all important ways, the Tories arc moving not to the Right, as Blair constantly says, but to the Left; and it is not altogether unattractive.

All we Tories can ask from our new Labour masters in return is that if we indulge their ideas of fun, they indulge ours. If it is all right for Twigg to have his views on sexuality, it is all right to allow the Prince to hunt. If they believe in 'toler- ance', then it is about jolly time they showed it. It is all very well for the Tories to make concessions to the new, changed mood in Britain, and for Portillo to join Twigg in making sensational gay confes- sions. But if the Right is to give ground in the modern British kulturkampf, we had better make sure the Left reciprocates.

It is highly unlikely, of course, that the Prince of Wales had any such agenda when he met Blair. But the latest news is that Labour has decided to postpone the ban on hunting until after the election. What does Twigg say to that?