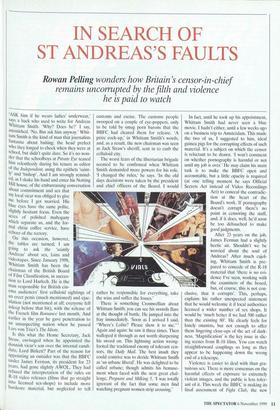 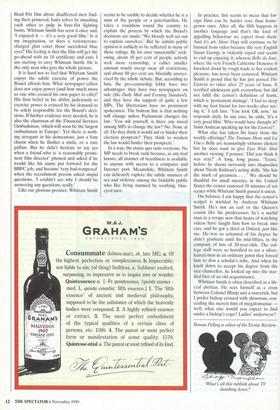 IN SEARCH OF ST ANDREAS'S FAULTS

'ASK him if he wears ladies' underwear,' says a hack who used to write for Andreas Whittam Smith. 'Why? Does he?' I say, astonished. 'No. But ask him anyway.' Whit- tam Smith is the kind of man that journalists fantasise about baiting; the head prefect who they longed to cheek when they were at school, but didn't quite dare. So it's no won- der that the schoolboys at Private Eye teased him relentlessly during his tenure as editor of the Independent, using the epithets 'saint- 13'' and 'bishop'. And I am strongly remind- ed, as I shake his hand and enter his Notting Hill house, of the embarrassing conversation about commitment and sex that my local vicar was obliged to give me before I got married. His blue eyes have the same polite, slightly hesitant focus. Even the acres of polished mahogany which separate us, and the for- mal china coffee service, have echoes of the rectory.

Is this what the Home Secretary, Jack Straw, envisaged when he appointed the donnish vicar's son over the internal candi- date, Lord Birkett? Part of the reason for appointing an outsider was that the BBFC under James Ferman, its president for 23 years, had gone slightly AWOL. They had relaxed the interpretation of the rules on R-18 video releases (films that go straight into licensed sex-shops) to include more hardcore material, but neglected to tell customs and excise. The customs people swooped on a couple of eye-poppers, only to be told by smug porn barons that the BBFC had cleared them for release. 'A prize cock-up,' in Whittam Smith's words, and, as a result, the new chairman was seen as Jack Straw's sheriff, sent in to curb the celluloid city.

The worst fears of the libertarian brigade seemed to be confirmed when Whittam Smith demanded more powers for his role. 'I changed the rules,' he says. 'In the old days decisions were taken by the president and chief officers of the Board. I would rather be responsible for everything, take the wins and suffer the losses.'

There is something Cromwellian about Whittam Smith; you can see his nostrils flare at the thought of battle. He jumped into the fray immediately. 'Soon as I arrived I said, "Where's Lolita? Please show it to me."' Again and again: he saw it three times. Then walloped it through as not worth sharpening his sword on. This lightning action wrong- footed the traditional enemy of tolerant cen- sors, the Daily Mail. The best insult they could contrive was to deride Whittam Smith as 'an urbane liberal'. He was delighted to be called urbane; though admits his bemuse- ment when faced with the next great chal- lenge, Pregnant and Milking 5. 'I was totally ignorant of the fact that some men find watching pregnant women strip arousing.'

In fact, until he took up his appointment, Whittam Smith had never seen a blue movie. I hadn't either, until a few weeks ago on a business trip to Amsterdam. This made the two of us, I suggested to him, ideal guinea pigs for the corrupting effects of such material. It's a subject on which the censor is reluctant to be drawn. 'I won't comment on whether pornography is harmful or not until my job is over.' He may claim his main task is to make the BBFC open and accountable, but a little opacity is required (at one telling moment he says Official Secrets Act instead of Video Recordings Act) to conceal the contradic- tion at the heart of the Board's work. If pornography doesn't corrupt there's no point in censoring the stuff, and, if it does, well, he'd soon be too debauched to make good judgments.

After 23 years on the job, James Ferman had a slightly hectic air. Shouldn't we be worried about the soul of Andreas? After much cajol- ing, Whittam Smith is pre- pared to concede of the R-18 material that 'there is no evi- dence I've seen, working with the examiners of the board, but, of course, this is not con- clusive, that it corrupts'. This, perhaps, explains his rather unexpected statement that he would welcome it if local authorities licensed a wider number of sex shops. It would be 'much better if we had 500 rather than the existing 80'. He clearly feels for lonely onanists, but not enough to offer them lingering close-ups of the act of dark- ness. 'Magnification' is the key issue in slic- ing scenes from R-18 films. You can watch straightforward couplings so long as they appear to be happening down the wrong end of a telescope.

Violence is easier to deal with than gra- tuitous sex. There is more consensus on the harmful effects of exposure to extremely violent images, and the public is less toler- ant of it. This week the BBFC is making its final assessment of Fight Club, the new

Brad Pitt film about disaffected men find- ing their primeval, hairy selves by smashing each other to pulp in bare-fist fighting bouts. Whittam Smith has seen it once and, 'I enjoyed it — it's a very good film.' Is it my imagination, or does a testosterone- charged glint enter those sacerdotal blue eyes? His feeling is that the film will get the go-ahead with an 18 certificate and cuts. I am starting to envy Whittam Smith. He is the only man who gets the whole picture.

It is hard not to feel that Whittam Smith enjoys the subtle exercise of power the Board affords him. What newspaper editor does not enjoy power (and how much more so one who created his own paper to edit)? His firm belief in his ability judiciously to exercise power is evinced by his demand to be solely responsible for the Board's deci- sions. If further evidence were needed, he is also the chairman of the Financial Services Ombudsman, 'which will soon be the largest ombudsman in Europe'. Yet there is noth- ing arrogant in his demeanour, just a foxy charm when he flashes a smile, or a rare guffaw. But he didn't hesitate to say yes when a friend who is 'a reasonably promi- nent film director' phoned and asked if he would like his name put forward for the BBFC job, and became 'very bad-tempered' when the recruitment person asked stupid questions. 'I couldn't see why I should be answering any questions, really.'

Like our glorious premier, Whittam Smith seems to be unable to decide whether he is a man of the people or a paterfamilias. He takes a roadshow round the country to explain the process by which the Board's decisions are made: 'We bloody well set out to explain ourselves.' But he admits public opinion is unlikely to be reflected in many of those rulings. By his own 'unscientific' reck- oning, about 10 per cent of people actively seek more censorship, a rather smaller amount would sweep away all restrictions, and about 80 per cent are blissfully unexer- cised by the whole debate. But, according to him, the pro-censorship lobby have two advantages: they have two newspapers on side (the Daily Mail and Evening Standard), and they have the support of quite a few MPs. The libertarians have no prominent spokesmen. The bottom line is that nothing will change unless Parliament changes the law. 'You ask yourself, is there any mood among MPs to change the law? No. None at all. Do they think it would aid or hinder their election prospects? They think to weaken the law would hinder their prospects.'

In a way, the status quo suits everyone. No MP needs to break rank because, as any fool knows, all manner of beastliness is available to anyone with access to a computer and Internet port. Meanwhile, Whittam Smith can delicately explore the subtle nuances of sex and violence among the biddable public who like being nannied by soothing, blue- eyed men.

In practice, this seems to mean that for- eign films can be harder core than home- grown ones. After all, the filth happens in another language and that's the kind of appalling behaviour we expect from them. And it's art. Straw Dogs will continue to be banned from video because the very English Susan George is violently raped and seems to end up enjoying it, whereas Belle du Jour, where the very French Catherine Deneuve is knocked about by rough trade to her evident pleasure, has never been censored. Whittam Smith is proud that he has just passed The Exorcist to video after 25 years of bans. It terrified adolescent girls everywhere but did not fulfil the censor's definition of harm, which is 'permanent damage'. 'I had to sleep with my best friend for two weeks after see- ing it,' I tell him. 'You look OK now,' he responds dryly. In any case, he adds, 'It's a very good film.' Who would have thought it? Saint Andreas speaking up for the Exorcist?

What else has taken his fancy from the weekly offerings? The Truman Show and La Vita e Bella are reassuringly virtuous choices but he does want to give Eyes Wide Shut another viewing. I pounce: 'Did you think it was sexy?' A long, long pause. 'Yeess,' before he shoots nervously into rhapsodies about Nicole Kidman's acting skills. 'She has the mark of greatness.... ' We should be thankful for small mercies; in the United States the censor removed 18 minutes of sex scenes while Whittam Smith passed it uncut.

On balance, I am happy that the censor's scalpel is wielded by Andreas Whittam Smith. He's not an earl or the Queen's cousin like his predecessor; he's a useful man in a scrape now that hours of watching videos have taught him how to break into cars; and he got a third at Oxford, just like me. He was so ashamed of his degree he didn't graduate until his mid-fifties, in the company of lots of 20-year-olds. The col- lege staff were so horrified to see a silver- haired man in an ordinary gown they forced him to don a scholar's robe. And when he knelt down to accept his degree from the vice-chancellor, he looked up into the star- tled face of an old acquaintance.

Whittam Smith is often described as a lib- eral puritan. He sees himself as a cross between Colonel Blimp and a maverick, but I prefer bishop crossed with showman, con- cealing the merest hint of megalomaniac well, what else would you expect to find under a bishop's cope? Ladies' underwear?

'What's all this rubbish about TV dumbing down?'