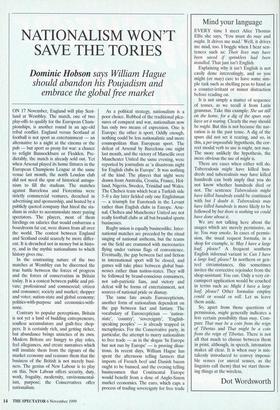 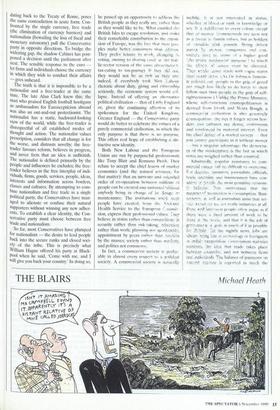 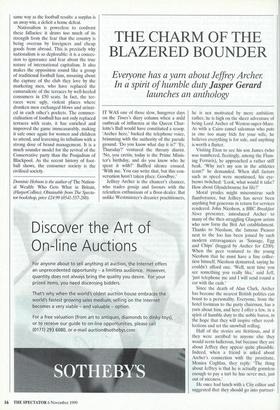 NATIONALISM WON'T SAVE THE TORIES

ON 17 November, England will play Scot- land at Wembley. The match, one of two play-offs to qualify for the European Cham- pionships, is another round in an age-old tribal conflict. England versus Scotland at football is not sport as entertainment — an alternative to a night at the cinema or the pub — but sport as proxy for war: a chance to refight Bannockburn or Flodden. Pre- dictably, the match is already sold out. Yet when Arsenal played its home fixtures in the European Champions League at the same venue last month, the north London club did not need the spur of historical antago- nism to fill the stadium. The matches against Barcelona and Fiorentina were strictly commercial ventures, drenched in advertising and sponsorship, and hosted by a publicly quoted company that hired the sta- dium in order to accommodate more paying spectators. The players, most of them hirelings on salaries that would embarrass a boardroom fat cat, were drawn from all over the world. The contest between England and Scotland could scarcely be more differ- ent. It is drenched not in money but in histo- ry, and in the mythic nationalisms to which history gives rise.

In the contrasting nature of the two matches at Wembley can be discerned the true battle between the forces of progress and the forces of conservatism in Britain today. It is a contest between public and pri- vate; professional and commercial; citizen and consumer, society and market; shopper and voter; nation-state and global economy; politics-with-purpose and economics-with- none.

Contrary to popular perceptions, Britain is not yet a land of budding entrepreneurs, soulless accumulators and guilt-free shop- pers. It is certainly rich, and getting richer, but abundance brings anxieties of its own. Modern Britons are hungry to play roles, feel allegiances, and create narratives which will insulate them from the rigours of the market economy and reassure them that the business of the British is not merely busi- ness. The genius of New Labour is to play on this. New Labour offers security, duty, work, frugality, modernity, environmental- ism, purpose; the Conservatives offer nationalism. As a political strategy, nationalism is a poor choice. Robbed of the traditional plea- sures of conquest and war, nationalism now has only two means of expression. One is Europe; the other is sport. Oddly enough, nothing could be less nationalistic and more cosmopolitan than European sport. The defeat of Arsenal by Barcelona one night last month, and the victory of Marseille over Manchester United the same evening, were reported by journalists as 'a disastrous night for English clubs in Europe'. It was nothing of the kind. The players that night were drawn from Australia, Croatia, France, Hol- land, Nigeria, Sweden, Trinidad and Wales. The Chelsea team which beat a Turkish side 5-0 a day later fielded only one Englishman — a triumph for Eurotrash in the Levant rather than English clubs in Europe. Arse- nal, Chelsea and Manchester United are not really football clubs at all but branded sports businesses.

Rugby union is equally businesslike. Inter- national matches are preceded by the ritual singing of national anthems, but the teams on the field are crammed with mercenaries flying under various flags of convenience. Eventually, the gap between fact and fiction in international sport will be closed, and games will take place between global busi- nesses rather than nation-states. They will be followed by brand-conscious consumers, not sub-patriotic fans, and victory and defeat will be forms of entertainment, not sources of national pride or dismay.

The same fate awaits Euroscepticism, another form of nationalism dependent on the gap between fact and fantasy. The vocabulary of Euroscepticism — 'nation- state', 'country', 'sovereignty', 'English- speaking peoples' — is already trapped in metaphysics. For the Conservative party, in particular, the attempt to marry nationalism to free trade — as in the slogan 'In Europe but not run by Europe' — is proving disas- trous. In recent days, William Hague has spent the afternoon telling farmers that imports of French beef and Danish bacon ought to be banned, and the evening telling businessmen that Continental Europe would benefit from a dose of Anglo-Saxon market economics. The euro, which caps a process of trading sovereignty for free trade

The truth is that it is impossible to be a nationalist and a free-trader at the same time. The late Alan Clark knew this: the man who praised English football hooligans as ambassadors for Euroscepticism abroad was also an out-and-out protectionist. The nationalist has a static, backward-looking view of the world, while the free-trader is disrespectful of all established modes of thought and action. The nationalist values prescription, considers that all change is for the worse, and distrusts novelty; the free- trader favours reform, believes in progress, and never frets that an idea is unBritish. The nationalist is defined primarily by the people and influences he excludes; the free- trader believes in the free interplay of indi- viduals, firms, goods, services, people, ideas, Interests and information across borders, classes and cultures. By attempting to com- bine nationalism and free trade in a single political party, the Conservatives have man- aged to alienate or confuse their natural supporters without winning any new adher- ents. To establish a clear identity, the Con- servative party must choose between free trade and nationalism.

So far, most Conservatives have plumped for nationalism — the desire to lead people back into the secure ranks and closed soci- ety of the tribe. This is precisely what William Hague offered his party at Black- Pool when he said, 'Come with me, and I will give you back your country.' In doing so,

he passed up an opportunity to address the British people as they really are. rather than as they would like to he. What enabled the British Isles to escape revolution. and make

their remarkable contribution to exnan- sion of Europe, was the faei that 'heir pies make better consumers They prefer leisure to work, shonpi'; voting, owning to sharing land. in di, lie-sector version of the sane, ohr-n-n.... tax-eating to tax-paying). it the,

they would not be as rieh as are

indeed, if everybody took Ne., Aliouf rhetoric about duty, giving and cd,,,,hip seriously, the economic system would col- lapse. Instead of offering an alternative political civilisation — that of I ittle England or, given the continuing affection of its spokesmen for the United Kingdom, Greater England — the Conservative party would do better to celebrate the virtues of a purely commercial civilisation, in which the only purpose is that there is no purpose. This offers real hope of establishing a dis- tinctive new identity.

Both New Labour and the European Union are run by purposeful professionals like Tony Blair and Romano Prodi. Thev refuse to accept the chief lesson of market economics (and the natural sciences. for that matter): that an inirieate and extended order of co-operation between millions of people can he created and sustained without anybody being in charge of its design :r maintenance. The

moinittote, .voter. sit n people have created. iron, •Narilnai Health Service to the European r. omnifr- sion, express their professional VOWS. :jley believe in status rather than conmedtion: in security rather than risk-taking. MIK:anon rather than work; planning not so.mtmeity, appointment by peers rather than .rie,z,iticin by the masses; society rather thin. markets; and politics not commerce.

is also genuinely forges across bor-

and material interest. Even• tne., chi, a market society . that

von oeioate in it without money

same way as the football results: a surplus is an away win, a deficit a home defeat.

Nationalism is powerless to confront these fallacies: it draws too much of its strength from the fear that the country is being overrun by foreigners and cheap goods from abroad. This is precisely why nationalism is so deplorable: it is a conces- sion to ignorance and fear about the true nature of international capitalism. It also makes the opposition sound like a group of traditional football fans, moaning about the capture of the club they love by the marketing men, who have replaced the camaraderie of the terraces by well-heeled consumers in £50 seats. In fact, the ter- races were ugly, violent places where drunken men exchanged blows and urinat- ed in each other's pockets. The commer- cialisation of football has not only replaced terraces with seats, it has enriched and improved the game immeasurably, making it safe once again for women and children to attend, and leavening its tribalism with a strong dose of brand management. It is a much sounder model for the revival of the Conservative party than the Poujadism of Blackpool. As the recent history of foot- ball shows, the consumer society is the civilised society.