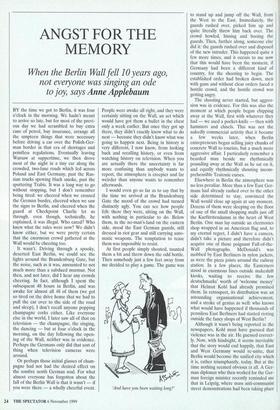 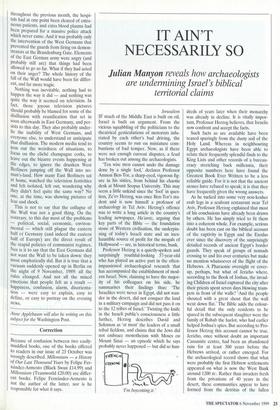 ANGST FOR THE MEMORY

When the Berlin Wall fell 10 years ago, not everyone was singing an ode to joy, says Anne Applebaum

BY the time we got to Berlin, it was four o'clock in the morning. We hadn't meant to arrive so late, but for most of the previ- ous day we had scrambled to buy extra cans of petrol, buy insurance, arrange all the umpteen things that were necessary before driving a car over the Polish-Ger- man border in that era of shortages and pointless regulations. Eventually leaving Warsaw at suppertime, we then drove most of the night in a tiny car along the crowded, two-lane roads which led across Poland and East Germany, past the Rus- sian trucks spewing black smoke, past the sputtering Trabis. It was a long way to go without stopping, but I don't remember being tired: we cheered when we crossed the German border, cheered when we saw the signs to Berlin, and cheered when the guard at Checkpoint Charlie let us through, even though, technically, he explained, it was illegal. Who cared? Who knew what the rules were now? We didn't know either, but we were pretty certain that the enormous crowd gathered at the Wall would be cheering too.

It wasn't. Driving through a spooky, deserted East Berlin, we could see the lights around the Brandenburg Gate, but the noise, such as it was, amounted to not much more than a subdued murmur. Not then, and not later, did I hear any crowds cheering. In fact, although I spent the subsequent 48 hours in Berlin, and was awake for almost all 48 of them (we got so tired on the drive home that we had to pull the car over to the side of the road and sleep), I don't recall anyone popping champagne corks either. Like everyone else in the world, I later saw all of that on television — the champagne, the singing, the dancing — but at four o'clock in the morning, on the day following the open- ing of the Wall, neither was in evidence. Perhaps the Germans only did that sort of thing when television cameras were around.

Or perhaps those initial glasses of cham- pagne had not had the desired effect on the sombre north German soul. For what almost everyone has forgotten about the fall of the Berlin Wall is that it wasn't — if you were there — a wholly cheerful event. People were awake all right, and they were certainly sitting on the Wall, an act which would have got them a bullet in the chest only a week earlier. But once they got up there, they didn't exactly know what to do next — because they didn't know what was going to happen next. Being in history is very different, I now know, from looking back and recalling history, or even from watching history on television. When you are actually there the uncertainty is far more confusing than anybody wants to report, the atmosphere is creepier and far weirder than anyone wants to remember afterwards.

I would even go so far as to say that by the time we arrived at the Brandenburg Gate the mood of the crowd had turned distinctly ugly. You can see how people felt: there they were, sitting on the Wall, with nothing in particular to do. Below them, in the no-man's-land on the eastern side, stood the East German guards, still dressed in riot gear and still carrying auto- matic weapons. The temptation to tease them was impossible to resist.

At first people simply shouted, taunted them a bit and threw down the odd bottle. Then somebody just a few feet away from me decided to play a game. The game was

And have you been waiting long?'

to stand up and jump off the Wall, from the West to the East. Immediately, the guards rushed over, picked him up and quite literally threw him back over. The crowd howled, hissing and booing the guards. Then, further along, someone else did it: the guards rushed over and disposed of the new intruder. This happened quite a few more times, and it occurs to me now that this would have been the moment, it Germany had been a different kind of country, for the shooting to begin. The established order had broken down, men with guns and without clear orders faced o hostile crowd, and the hostile crowd was getting angry.

The shooting never started, but aggres- sion was in evidence. For this was also the moment at which people began chipping away at the Wall, first with whatever they had — we used a pocket-knife — then with hammers and chisels. This was not the nakedly commercial activity that it became a few weeks later, when Berlin entrepreneurs began selling juicy chunks of concrete Wall to tourists, but a much more aggressive affair. I particularly remember a bearded man beside me rhythmically pounding away at the Wall as he sat on it, and equally rhythmically shouting incom- prehensible Teutonic curses.

Elsewhere in Berlin the atmosphere was no less peculiar. More than a few East Ger- mans had already rushed over to the other side determined to stay, convinced the Wall would close up again at any moment. Dozens of them were sleeping on the floor of one of the small shopping malls just off the Kurfiirstendamm in the heart of West Berlin. One man lay outside an electronics shop wrapped in an American flag and, to my eternal regret, I didn't have a camera, didn't take a picture and therefore didn't acquire one of those poignant Fall-of-the- Wall photographs. McDonald's was mobbed by East Berliners in nylon jackets, as were the pizza joints around the railway station. In a few places, the Easterners stood in enormous lines outside makeshift kiosks, waiting to receive the few deutsclunarks' worth of 'welcome money' that Helmut Kohl had already promised them. In retrospect, its distribution was an astounding organisational achievement, and a stroke of genius as well: who knows what would have happened if thousands of penniless East Berliners had started rioting outside the fancy shops of West Berlin?

Although it wasn't being reported in the newspapers, Kohl must have guessed that violence was in the air. He guessed correct- ly. Now, with hindsight, it seems inevitable that the story would end happily, that East and West Germany would re-unite, that Berlin would become the unified city which it is, rather triumphantly, today. But at the time nothing seemed obvious at all. A Ger- man diplomat who then worked for the Ger- man foreign minister recently reminded me that in Leipzig, where mass anti-communist street demonstrations had been taking place

throughout the previous month, the hospi- tals had at one point been cleared of extra- neous patients, and extra blood plasma had been prepared for a massive police attack which never came. And it was probably only the intervention of the West Germans that prevented the guards from firing on demon- strators at the Brandenburg Gate. Elements of the East German army were angry (and probably still are) that things had been allowed to go so far. What if they had acted on their anger? The whole history of the fall of the Wall would have been far differ- ent, and far more tragic. Nothing was inevitable, nothing had to happen the way it did — and nothing was quite the way it seemed on television. In fact, those joyous television pictures should probably be blamed for some of the disillusion with reunification that set in soon afterwards in East Germany, and per- sists to this day. They also probably under- lie the inability of West Germans, and everyone else, to understand or anticipate that disillusion. The modern media tend to iron out the weirdness of situations, to focus on the cliché champagne corks, to leave out the bizarre events happening at the edges, to ignore the drunken West Berliners jumping off the Wall into no- man's-land. How many East Berliners sat at home, watched the television festivities and felt isolated, left out, wondering why they didn't feel quite the same way? No one, at the time, was showing pictures of fear and shock.

This is not to say that the collapse of the Wall was not a good thing. On the contrary, to this day most of the problems — political, social, economic, environ- mental — which still plague the eastern half of Germany (and indeed the eastern half of Europe) are the direct result of the stupid policies of communist regimes. Nor is it to say that the East Germans did not want the Wall to be taken down: they Most emphatically did. But it is true that a vacuum suddenly opened up in Berlin on the night of 9 November, 1989: all the rules changed. And not all the mixed emotions that people felt as a result happiness, confusion, alarm, disorienta- tion — were easy to explain, easy to define, or easy to portray on the evening news.

Anne Applebaum will also be writing on this subject for the Washington Post.