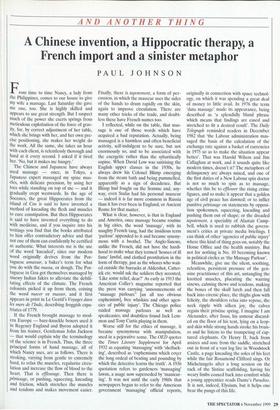 A Chinese invention, a Hippocratic therapy, a French import and a sinister metaphor

PAUL JOHNSON From time to time Nancy, a lady from the Philippines, comes to our house to give my wife a massage. Last Saturday she gave me one, too. She is highly skilled and appears to use great strength. But I suspect much of the power she exerts springs from meticulous exploitation of the force of grav- ity, for, by correct adjustment of her table, which she brings with her, and her own pre- cise positioning, she makes her weight do the work. All the same, she takes an hour with each client, is relentlessly thorough and hard at it every second. I asked if it tired her. 'No, but it makes me hungry.'

The Chinese and Japanese have always used massage — once, in Tokyo, a Japanese expert massaged my spine mus- cles, with delicate precision, by using her toes while standing on top of me — and it gradually crept westwards. In the age of Socrates, the great Hippocrates from the island of Cos is said to have invented a method of kneading the flesh and muscles to cure constipation. But then Hippocrates is said to have invented everything to do with medicine, and if you inquire into his writings you find that the books attributed to him offer contradictory advice and that not one of them can confidently be certified as authentic. What interests me is the use of the word 'kneaded', since our modern word originally derives from the Por- tuguese amassar, a baker's term for what you do with the massa, or dough. The Por- tuguese in Goa got themselves massaged by sinewy Indian fakirs to alleviate the debili- tating effects of the climate. The French colonists picked it up from them, coining the word mater or masser, and it first appears in print in Le Gentil's Voyages dans les mers de PInde, describing hoggish expa- triates of 1779.

If the French brought massage to mod- ern Europe — bare-knuckle boxers used it in Regency England and Byron adopted it from his trainer, Gentleman John Jackson — that would explain why the terminology of the science is in French. Thus, the three principal forms of hand massage, all of which Nancy uses, are as follows. There is stroking, varying from gentle to extremely hard, to relax the muscles, regularise circu- lation and increase the flow of blood to the heart. That is effleurage. Then there is petrissage, or pushing, squeezing, kneading and friction, which stretches the muscles and tendons and makes movement easier.

Finally, there is tapotement, a form of per- cussion, in which the masseur uses the sides of the hands to drum rapidly on the skin, again to improve circulation. There are many other tricks of the trade, and doubt- less these have French names too.

I reflected, while on the table, that mas- sage is one of those words which have acquired a bad reputation. Actually, being massaged is a harmless and often beneficial activity, self-indulgent to be sure, but not enormously so, and to be associated with the energetic rather than the sybaritically supine. When David Low was satirising the English upper classes in the 1930s, he always drew his Colonel Blimp emerging from the steam bath and being pummelled, apparently as a sign of decadence. But Blimp had fought on the Somme and, any- way, even Stalin had his personal masseur — indeed it is far more common in Russia than it has ever been in England, or Ancient Rome for that matter.

What is clear, however, is that in England and America, once massage became routine in big cities, the word `massage', with its naughty French tang, had the insidious term `parlour' appended to it and became synony- mous with a brothel. The Anglo-Saxons, unlike the French, did not have the hardi- hood to make what they termed 'houses of ill fame' lawful, and clothed prostitution in the form of therapy, just as the whores who wait- ed outside the barracks at Aldershot, Catter- ick etc. would ask the soldiers they accosted, 'Like some relief, dear?' As early as 1913 the American Collier's magazine reported that the press was carrying 'announcements of "massage parlours" kin all too obvious euphemism], free whiskies and other agen- cies of public injury'. The Chicago police raided massage parlours as well as speakeasies, and doubtless found Jack Lem- mon and Tony Curtis playing in them.

Worse still for the ethics of massage, it became synonymous with manipulation, used in a pejorative sense. The OED quotes the Times Literary Supplement for April 1932 as equating 'massaging' with 'shellack- ing', described as 'euphemisms which cover the long ordeal of beating and pounding by which the detective learns the truth'. A 1936 quotation refers to gardeners 'massaging' lawns, a usage now superseded by 'manicur- ing'. It was not until the early 1960s that newspapers began to refer to the American government 'massaging' official reports, originally in connection with space technol- ogy, on which it was spending a great deal of money to little avail. In 1976 the term 'data massage' made its appearance, being described as 'a splendidly bland phrase which means that findings are eased and stretched to fit a desired result'. The Daily Telegraph reminded readers in December 1982 that `the Labour administration mas- saged the basis of the calculation of the exchange rate against a basket of currencies in 1975 so as to make the situation appear better'. That was Harold Wilson and Jim Callaghan at work, and it sounds quite like modern times, doesn't it? The metaphors of delinquency are always mixed, and one of the first duties of a New Labour spin doctor is not so much to spin as to massage, whether this be to effleurer the rising crime figures, and so make it appear that a golden age of civil peace has dawned; or to inflict punitive petrissage on statements by opposi- tion spokesmen, squeezing, kneading and pushing them out of shape; or the dreaded tapotement, a speciality of Alastair Camp- bell, which is used to rubbish the govern- ment's critics at private media briefings. I can think of other 'agencies of public injury' where this kind of thing goes on, notably the Home Office and the health ministry. But not for nothing is No. 10 becoming known in political circles as 'the Massage Parlour'.

Meanwhile, give me the silent, soothing, relentless, persistent pressure of the gen- uine practitioner of this art, untangling the knotted muscles, placating the warring sinews, calming thews and tendons, making the bones of the skull lurch and then fall back into eirenic place, the thighs glow with felicity, the shoulders relax into repose, the neck ripple with silken joy, the calves regain their pristine spring. I imagine I am Alexander, after Isms, his armour discard- ed on the floor of his tent, lying on a leop- ard skin while strong hands stroke his bruis- es and he listens to the trumpeting of cap- tured elephants. Or Henry II, back from assizes and sore from the saddle, stretched out in front of a vast log fire in Woodstock Castle, a page kneading the soles of his feet while the fair Rosamond Clifford sings. Or Michelangelo after a long session on the rack of the Sistine scaffolding, having his weary limbs coaxed back into comfort while a young apprentice reads Dante's Paradiso. It is not, indeed, Elysium, but it helps one bear the pangs of this life.