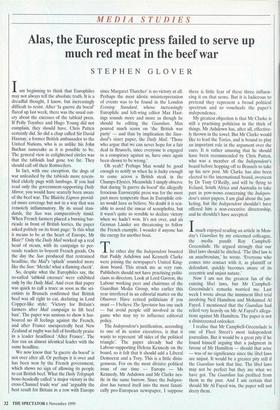 Alas, the Eurosceptic press failed to serve up much red meat in the beef war

Iam beginning to think that Europhiles may not always tell the absolute truth. It is a dreadful thought, I know, but increasingly difficult to resist. After 'la guerre du boeuf flared up last week, there was the usual out- cry about the excesses of the tabloid press. If Polly Toynbee and Hugo Young did not complain, they should have. Chris Patten certainly did. So did a chap called Sir David Hannay, a former British ambassador to the United Nations, who is as unlike his John Buchan namesake as it is possible to be. The general view in enlightened circles was that the tabloids had gone too far. They should call off their Rottweilers.

In fact, with one exception, the dogs of war unleashed by the tabloids more resem- bled elderly pugs with lumbago. If you had read only the government-supporting Daily Mirror, you would have scarcely been aware of the beef war. The Blairite Express provid- ed more coverage but not in a way that was remotely inflammatory. By its usual Stan- dards, the Sun was comparatively timid. When French farmers placed a burning bar- ricade in front of British lorries, the paper asked politely on its front page: 'Is this what it means to be at the heart of Europe, Mr Blair?' Only the Daily Mail worked up a real head of steam, with its campaign to per- suade readers to boycott French goods. On the day the Sun produced that restrained headline, the Mail's 'splash' sounded more like the Sun: `Merde! what a flaming cheek'.

So, despite what the Europhiles say, the so-called 'tabloid excesses' were exhibited only by the Daily Mail. And even that paper was quick to call a truce as soon as the sci- entists in Brussels confirmed that British beef was all right to eat, declaring in Lord Copper-like style: 'Victory for Britain's farmers after Mail campaign to lift beef ban'. The paper was anxious to show it har- boured no ill feelings against the French, and after France unexpectedly beat New Zealand at rugby was full of brotherly praise in a leader headlined 'Allez France'. The Sun ran an almost identical leader with the same headline.

We now know that 'la guerre du boeuf is not over after all. Or perhaps it is over and has been won by the French government, which shows no sign of allowing its people to eat British beef. What the Daily Telegraph bone-headedly called 'a major victory in the cross-Channel trade war' and 'arguably the best result for Britain in a row with Europe

since Margaret Thatcher' is no victory at all. Perhaps the most idiotic misinterpretation of events was to be found in the London Evening Standard, whose increasingly Europhile and left-wing editor Max Hast- ings sounds more and more as though he should be editing the Guardian. Max poured much scorn on 'the British war party' — and thus by implication the Stan- dard's sister paper, the Daily Mail. 'Those who argue that we can never hope for a fair deal in Brussels, since everyone is engaged in a conspiracy against us, have once again been shown to be wrong.'

Oh yeah? Perhaps Max would be good enough to notify us when he is lucky enough to come across a British steak in the Champs-Elysees. Meanwhile I simply observe that during 'la guerre du boeuf' the allegedly ferocious Eurosceptic press was for the most part more temperate than its Europhile crit- ics would have us believe. No doubt it is sen- sible to avoid the smear of xenophobia, but it wasn't quite so sensible to declare victory when we hadn't won. It's not over, and six German Lander are threatening to follow the French example. I wonder if anyone has the energy for another bout.

The other day the Independent boasted that Paddy Ashdown and Kenneth Clarke were joining the newspaper's United King- dom board. This struck me as very rum. Publishers should not have practising politi- cians as directors. Look at Lord Gavron, the Labour working peer and chairman of the Guardian Media Group, who earlier this year interfered in an editorial matter on the Observer. Have retired politicians if you must — I believe The Spectator has one such — but avoid people still involved in the game who may try to influence editorial policy.

The Independent's justification, according to one of its senior executives, is that it wants to represent 'all sides of the political triangle'. The paper already had the Labour-supporting Helena Kennedy on the board, so it felt that it should add a Liberal Democrat and a Tory. This is a little disin- genuous. For on the most divisive political issue of our time — Europe — Ms Kennedy, Mr Ashdown and Mr Clarke nes- tle in the same burrow. Since the Indepen- dent has turned itself into the most fanati- cally pro-European newspaper, I suppose

there is little fear of these three influen- cing it on that score. But it is ludicrous to pretend they represent a broad political spectrum and so vouchsafe the paper's independence.

My greatest objection is that Mr Clarke is still a practising politician in the thick of things. Mr Ashdown has, after all, effective- ly thrown in the towel. But Mr Clarke would like to lead the Tories, and is bound to play an important role in the argument over the euro. It is rather amusing that he should have been recommended by Chris Patten, who was a member of the Independent's board before hopping off to Brussels to take up his new post. Mr Clarke has also been elected to the international board, overseen by Dr Tony O'Reilly, and will be flying to Ireland, South Africa and Australia to take part in pow-wows concerning the Indepen- dent's sister papers. I am glad about the jun- keting, but the Independent shouldn't have offered him a non-executive directorship, and he shouldn't have accepted.

Imuch enjoyed reading an article in Mon- day's Guardian by my esteemed colleague, the media pundit Roy Campbell- Greenslade. He argued strongly that our libel laws should be ditched. 'The libel law is an anachronism,' he wrote. 'Everyone who comes into contact with it, as plaintiff or defendant, quickly becomes aware of its eccentric and unjust nature.'

Now I am not the greatest fan of the existing libel laws, but Mr Campbell- Greenslade's remarks worried me. Last week I wrote about the imminent libel trial involving Neil Hamilton and Mohamed Al Fayed. I mentioned that the Guardian had relied very heavily on Mr Al Fayed's allega- tions against Mr Hamilton. The paper is not a disinterested onlooker.

I realise that Mr Campbell-Greenslade is one of Fleet Street's most independent journalists. But it would be a great pity if he found himself arguing that a judgment in favour of Mr Hamilton — should that arise — was of no significance since the libel laws are unjust. It would be a greater pity still if the Guardian took that line. The libel laws may not be perfect but they are what we have got. The Guardian has profited from them in the past. And I am certain that should Mr Al Fayed win, the paper will not decry them.