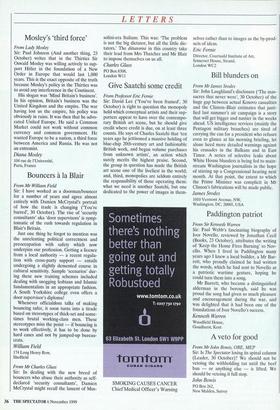 From Lady Mosley Sir: Paul Johnson (And another thing, 23 October) writes that in the Thirties Sir Oswald Mosley was willing actively to sup- port Hitler in the foundation of a New Order in Europe that would last 1,000 years. This is the exact opposite of the truth because Mosley's policy in the Thirties was to avoid any interference in the Continent.

His slogan was 'Mind Britain's business'. In his opinion, Britain's business was the United Kingdom and the empire. The war having lost us the empire, his policy was obviously in ruins. It was then that he advo- cated United Europe. He said a Common Market could not work without common currency and common government. He wanted Europe to be a nation, a third force between America and Russia. He was not an extremist.