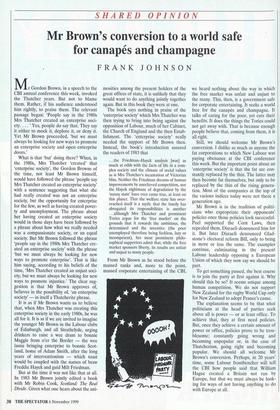 Mr Brown's conversion to a world safe for canapes and champagne

FRANK JOHNSON Mr Gordon Brown, in a speech to the CBI annual conference this week, invoked the Thatcher years. But not to blame them. Rather, if his audience understood him rightly, to praise them. The relevant passage began; `People say in the 1980s Mrs Thatcher created an enterprise soci- ety. . ' Yes, people do say that. They say it either to mock it, deplore it, or deny it. Yet Mr Brown proceeded, `but we must always be looking for new ways to promote an enterprise society and open enterprise doors.'

It is as if Mr Brown wants us to believe that, when Mrs Thatcher was creating this enterprise society in the early 1980s, he was all for it. It is as if we are invited to imagine the younger Mr Brown in the Labour clubs of Edinburgh, and all Strathclyde, urging drinkers to raise a wee dram to bonnie Maggie from o'er the Border — the wee lassie bringing enterprise to bonnie Scot- land, home of Adam Smith, after the long years of interventionism — which toast would be coupled with the names of braw Freddie Hayek and guid Milt Friedman.

But at the time it was not like that at all. In 1983 Mr Brown jointly edited a book with Mr Robin Cook, Scotland: The Real Divide. Given what one hears about the ani- mosities among the present holders of the great offices of state, it is unlikely that they would want to do anything jointly together again. But in this book they were at one.

The book says nothing in praise of the `enterprise society' which Mrs Thatcher was then trying to bring into being against the opposition of Labour, much of her Cabinet, the Church of England and the then Estab- lishment. The `enterprise society' really needed the support of Mr Brown then. Instead, the book's introduction assured the readers of 1983 that

the Friedman-Hayek analysis [was] as much at odds with the facts of life in a com- plex society and the climate of social values as is Mrs Thatcher's incantation of Victorian bliss. Neither the Friedman dreams of human improvements by unrelieved competition, nor the Hayek nightmare of degradation by the 'nanny state' have ever come true, at least on this planet. That the welfare state has over- reached itself is a myth: that the family has abrogated its responsibilities is another ... although Mrs Thatcher and prominent Tories argue for the 'free market' on the grounds that it rewards the ambitious, the determined and the inventive (the poor unemployed therefore being feckless, lazy or incompetent), her most prominent philo- sophical supporters admit that, while the free market sponsors liberty, its results are unfair and unjust to many people.

From Mr Brown as he stood before the massed ranks and, more to the point, massed corporate entertaining of the CBI. we heard nothing about the way in which the free market was unfair and unjust to the many. This, then, is a government safe for corporate entertaining. It seeks a world free for the canapes and champagne. It talks of caring for the poor, yet cuts their benefits. It does the things the Tories could not get away with. That is because enough people believe that, coming from them, it is all right.

Still, we should welcome Mr Brown's conversiqh. I dislike as much as anyone the fat corporations to which New Labour was paying obeisance at the CBI conference this week. But the important point about an `enterprise society' is that the fat are con- stantly replaced by the thin. The latter may then become fat themselves, but only to be replaced by the thin of the rising genera. tion. Most of the companies at the top of the various indices today were not there a generation ago.

Mr Brown is in the tradition of politi- cians who expropriate their opponents' policies once those policies look successful. Peel supported the Corn Laws, then repealed them. Disraeli denounced him for it. But later Disraeli denounced Glad- stone's electoral reform Bill, only to bring in more or less the same. The examples continue, culminating in the present Labour leadership opposing a European Union of which they now say we should be part.

To get something passed, the best course is to join the party at first against it. Why should this be so? It seems unique among human competition. We do not support New Zealand for the rugby World Cup only for New Zealand to adopt France's cause.

The explanation seems to be that what politicians at the head of parties seek above all is power — or at least office. To achieve that, they at first need policies. But, once they achieve a certain amount of power or office, policies prove to be trou- blesome; constantly going wrong and becoming unpopular or, in the case of Thatcherism, going right and becoming popular. We should all welcome Mr Brown's conversion. Perhaps, in 20 years' time, some Labour frontbencher will tell the CBI how people said that William Hague created a Britain not run by Europe, but that we must always be look- ing for ways of not having anything to do with Europe at all.