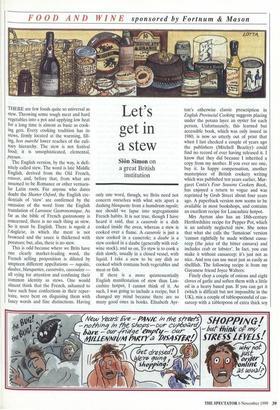 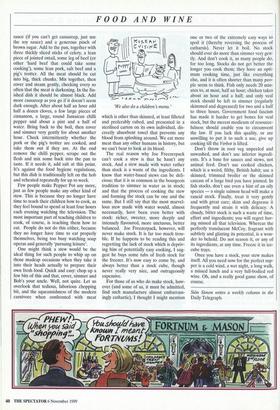 Let's get in a stew

THERE are few foods quite so universal as stew. Throwing some tough meat and hard vegetables into a pot and applying low heat for a long time is almost as basic as cook- ing gets. Every cooking tradition has its stews, firmly located at the warming, fill- ing, bon marche lower reaches of the culi- nary hierarchy. The stew is not festival food; it is unsophisticated, elemental, paysan.

The English version, by the way, is defi- nitely called stew. The word is late Middle English, derived from the Old French, estuver, and, before that, from what are assumed to be Romance or other vernacu- lar Latin roots. For anyone who dares doubt the Shorter Oxford, the English cre- dentials of 'stew' are confirmed by the omission of the word from the English translation of Larousse Gastronomique. As far as the bible of French gastronomy is concerned, there is no such thing as stew. So it must be English. There is ragout a l'Anglaise, in which the meat is not browned and the sauce is thickened with potatoes; but, alas, there is no stew.

This is odd because where we Brits have one clearly market-leading word, the French selling proposition is diluted by umpteen different appellations — ragouts, daubes, blanquettes, casseroles, cassoulets all vying for attention and confusing their common identity as stews. One would almost think that the French, ashamed to have such base confections in their reper- toire, were bent on disguising them with fancy words and fine distinctions. Having

only one word, though, we Brits need not concern ourselves with what sets apart a dashing blanquette from a humdrum ragout; nor should we lapse into segregationist French habits. It is not true, though I have heard it said, that a casserole is a dish cooked inside the oven, whereas a stew is cooked over a flame. A casserole is just a stew cooked in a casserole; a daube is a stew cooked in a daube (generally with red- wine stock), and so on. To stew is to cook a dish slowly, usually in a closed vessel, with liquid. I take a stew to be any dish so cooked which contains both vegetables and meat or fish.

If there is a more quintessentially English manifestation of stew than Lan- cashire hotpot, I cannot think of it. As such, I was going to include a recipe, but I changed my mind because there are so many good ones in books. Elisabeth Ayr- ton's otherwise classic prescription in English Provincial Cooking suggests placing under the potato layer an oyster for each person. Unfortunately, this learned but accessible book, which was only issued in 1980, is now so utterly out of print that when I last checked a couple of years ago the publishers (Mitchell Beazley)• could find no record of ever having released it. I know that they did because I inherited a copy from my mother. If you ever see one, buy it. In happy compensation, another masterpiece of British cookery writing which was published ten years earlier, Mar- garet Costa's Four Seasons Cookery Book, has enjoyed a return to vogue and was reprinted by Grub Street about four years ago. A paperback version now seems to be available in most bookshops, and contains an excellent recipe for Lancashire hotpot.

Mrs Ayrton also has an 18th-century Hertfordshire recipe for Pepper Pot, which is an unfairly neglected stew. She notes that what she calls the 'Jamaican' version 'cannot rightfully be made without cassa- reep (the juice of the bitter cassava) and includes crab or lobster'. In fact, you can make it without cassareep; it's just not as nice. And you can use meat just as easily as shellfish. The following recipe is from my Guyanese friend Joyce Walters:

Finely chop a couple of onions and eight cloves of garlic and soften them with a little oil in a heavy based pan. If you can get it (which is difficult but not impossible in the UK), mix a couple of tablespoonsful of cas- sareep with a tablespoon of extra thick soy

sauce (if you can't get cassareep, just use the soy sauce) and a generous pinch of brown sugar. Add to the pan, together with three thickly sliced sticks of celery, a lean piece of jointed oxtail, some leg of beef (or other 'hard beef that could take some cooking'), some lean pork, salt beef and a pig's trotter. All the meat should be cut into big, thick chunks. Mix together, then cover and steam gently, checking every so often that the meat is darkening. In the fin- ished dish it should be almost black. Add more cassareep as you go if it doesn't seem dark enough. After about half an hour add half a dozen cloves, a few large pieces of cinnamon, a large, round Jamaican chilli pepper and about a pint and a half of water. Bring back to the boil, then cover and simmer very gently for about another hour. Check intermittently whether the pork or the pig's trotter are cooked, and take them out if they are. At the end remove the chilli pepper, scrape out the flesh and mix some back into the pan to taste. If it needs it, add salt at this point. It's against the food hygiene regulations, but this dish is traditionally left on the hob and reheated repeatedly for up to week.

Few people make Pepper Pot any more, just as few people make any other kind of stew. This is because they no longer have time to teach their children how to cook, as they feel bound to spend at least four hours each evening watching the television. The most important part of teaching children to cook, of course, is teaching them how to eat. People do not do this either, because they no longer have time to eat properly themselves, being too busy watching soap operas and generally 'pursuing leisure'.

One might think a stew would be the ideal thing for such people to whip up on those madcap occasions when they take it into their heads actually to prepare their own fresh food. Quick and easy: chop up a few bits of this and that, cover, simmer and Bob's your uncle. Well, not quite. Let us overlook that tedious, laborious chopping bit, and the squeamishness of the modem carnivore when confronted with meat

'We also do a children's menu.'

which is other than skinned, at least filleted and preferably cubed, and presented in a sterilised carton on its own individual, dis- creetly absorbent towel that prevents any blood from sploshing around. We eat more meat than any other humans in history, but we can't bear to look at its blood.

The real reason why Joe Freezerpack can't cook a stew is that he hasn't any stock. And a stew made with water rather than stock is a waste of the ingredients. I know that water-based stews can be deli- cious; that it is as common in the bourgeois tradition to simmer in water as in stock; and that the process of cooking the stew and forming the stock can be one and the same. But I still say that the most marvel- lous stew made with water would, almost necessarily, have been even better with stock: richer, sweeter, more deeply and intensely flavoured, more unctuous, better balanced. Joe Freezerpack, however, will never make stock. It is far too much trou- ble. If he happens to be reading this and regretting the lack of stock which is depriv- ing him of potentially easy cooking, I sug- gest he buys some tubs of fresh stock for the freezer. It's now easy to come by, and always better than a stock cube, though never really very nice, and outrageously expensive.

For those of us who do make stock, how- ever (and some of us, it must be admitted, find such manufacture almost embarrass- ingly cathartic), I thought I might mention

one or two of the extremely easy ways to spoil it (thereby reversing the process of catharsis). Never let it boil. No stock should ever do more than simmer very gen- tly. And don't cook it, as many people do, for too long. Stocks do not get better the longer you cook them; they have an opti- mum cooking time, just like everything else, and it is often shorter than many peo- ple seem to think. Fish only needs 20 min- utes to, at most, half an hour; chicken takes about an hour and a half; and only veal stock should be left to simmer (regularly skimmed and degreased) for two and a half to three hours. Government food fascism has made it harder to get bones for veal stock, but the merest modicum of resource- fulness should enable you to circumvent the law. If you lack this quality, or are unwilling to put it to such a use, give up cooking till the Verbot is lifted.

Don't throw in root veg unpeeled and unwashed, and don't use inferior ingredi- ents. It's a base for sauces and stews, not animal feed. Don't use cooked chicken, which is a weird, filthy, British habit; use a skinned, trimmed broiler or the skinned carcass of a large bird you have jointed. In fish stocks, don't use even a hint of an oily species — a single salmon head will make a rancid stock. Finally, treat it very gently and with great care; skim and degrease it frequently and strain it with delicacy. A cloudy, bitter stock is such a waste of time, effort and ingredients; you will regret hav- ing missed all that television. Whereas the perfectly translucent McCoy, fragrant with subtlety and glinting its potential, is a won- der to behold. Do not season it, or any of its ingredients, at any time. Freeze it in ice- cube trays.

Once you have a stock, your stew makes itself. All you need now for the perfect sup- per is a cold wind, a wet night, a long walk, a missed lunch and a very full-bodied red wine. Oh, and a really good game show, of course.

&On Simon writes a weekly column in the Daily Telegraph.