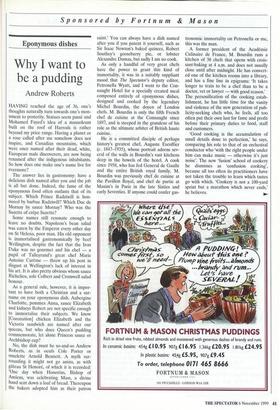 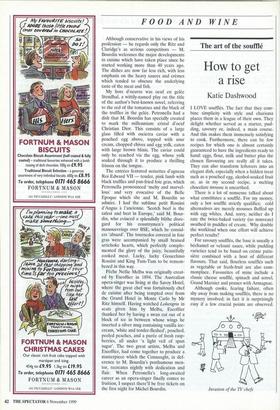 Why I want to be a pudding

HAVING reached the age of 36, one's thoughts naturally turn towards one's mon- ument to posterity. Statues seem passe and Mohamed Fayed's idea of a mausoleum built on the roof of Harrods is rather beyond my price range. Having a planet or a rose called after me somehow does not inspire, and Canadian mountains, which were once named after their dead, white, European male discoverers, are now being renamed after the indigenous inhabitants. So how does one make one's name live for evermore?

The answer lies in gastronomy: have a delicious dish named after you and the job is all but done. Indeed, the fame of the eponymous food often outlasts that of its subject. Which Prince Radziwill is hon- oured by barbue Radziwill? Which Duc de Mornay by sauce Mornay? Who was the Suzette of crepe Suzette?

Some names still resonate enough to leave no doubts. Napoleon's bean salad was eaten by the Emperor every other day on St Helena, poor man. His old opponent is immortalised gastronomically by beef Wellington, despite the fact that the Iron Duke was no gourmet and his chef — a pupil of Talleyrand's great chef Marie Antoine Careme — threw up his post in disgust at Wellington's lack of interest in his art. It is also pretty obvious whom sauce Richelieu, sole Colbert and Cromwell salad honour.

As a general rule, however, it is impor- tant to have both a Christian and a sur- name on your eponymous dish. Aubergine Charlotte, pommes Anna, sauce Elizabeth and kidneys Robert are not specific enough to immortalise their subjects. We know [Coronation) chicken Elizabeth and the Victoria sandwich are named after our queens, but who does Queen's pudding commemorate, let alone Princess sauce or Archbishop cup?

No, the dish must be so-and-so Andrew Roberts, as in oeufs Cole Porter or omelette Arnold Bennett. A myth sur- rounding it might not go amiss, as with gateau St Honore, of which it is recorded: 'One day when Honorius, Bishop of Amiens, was celebrating Mass, a divine hand sent down a loaf of bread. Thereupon the bakers adopted him as their patron saint.' You can always have a dish named after you if you patent it yourself, such as Sir Isaac Newton's baked quinces, Robert Southey's gooseberry pie, or lobster Alexandre Dumas, but sadly I am no cook.

As only a handful of very great chefs have the power to grant this kind of immortality, it was in a suitably suppliant mood that The Spectator's deputy editor, Petronella Wyatt, and I went to the Con- naught Hotel for a specially created meal composed entirely of eponymous dishes, designed and cooked by the legendary Michel Bourdin, the doyen of London chefs. M. Bourdin is only the fifth French chef de cuisine at the Connaught since 1897, and is steeped in the grandeur of his role as the ultimate arbiter of British haute cuisine.

He is a committed disciple of perhaps history's greatest chef, Auguste Escoffier (c. 1847-1935), whose portrait adorns sev- eral of the walls in Bourdin's vast kitchens deep in the bowels of the hotel. A cook since 1958, who has fed General de Gaulle and the entire British royal family, M. Bourdin was previously chef de cuisine at the Pavillon Royal, and chef de partie at Maxim's in Paris in the late Sixties and early Seventies. If anyone could confer gas- tronomic immortality on Petronella or me, this was the man.

A former president of the Academie Culinaire de France, M. Bourdin runs a kitchen of 38 chefs that opens with crois- sant-baking at 4 a.m. and does not usually close until after midnight. He has convert- ed one of the kitchen rooms into a library, and has a fine line in epigrams: 'It takes longer to train to be a chef than to be a doctor, vet or lawyer — with good reason.' The personification of the cooking estab- lishment, he has little time for the vanity and violence of the new generation of pub- licity-seeking chefs who, he feels, all too often put their own lust for fame and profit before their primary duties to food, staff and customers.

'Good cooking is the accumulation of small details done to perfection,' he says, comparing his role to that of an orchestral conductor who 'with the right people under him can make music — otherwise it's just noise'. The new 'fusion' school of cookery he dismisses as 'confusion cooking', because all too often its practitioners have not taken the trouble to learn which tastes go with which. 'Cookery is not a 100-yard sprint but a marathon which never ends,' he believes. Although conservative in his views of his profession — he regards only the Ritz and Claridge's as serious competitors — M. Bourdin welcomes the major developments in cuisine which have taken place since he started working more than 40 years ago. The dishes are now far less rich, with less emphasis on the heavy sauces and crèmes which tended to obscure the underlying taste of the meat and fish.

My hors d'oeuvre was oeuf en gel& Stendhal, a wittily-named play on the title of the author's best-known novel, referring to the red of the tomatoes and the black of the truffles in the gelee. Petronella had a dish that M. Bourdin has specially created to mark the millennium: cristal d'oeuf Christian Dior. This consists of a large glass filled with oscietra caviar with a poached egg above, topped with sour cream, chopped chives and egg yolk, eaten with large brown blinis. The caviar could only be reached via the egg, whose yolk soaked through it to produce a thrilling frisson on the tongue.

The entrées featured noisettes d'agneau Roi Edward VII — tender, pink lamb with black truffles and pan-fried foie gras, which Petronella pronounced `melty and marvel- lous' and very evocative of the Belle Epoque which she and M. Bourdin so admire. I had the sublime petit Rossini d'Angus it l'ancienne. 'Scotch beef is the safest and best in Europe,' said M. Bour- din, who evinced a splendidly blithe disre- gard for his countrymen's political manouevrings over BSE, which he consid- ers 'absurd'. The tournedos covered in foie gras were accompanied by small braised artichoke hearts, which perfectly comple- mented the glory of the juicy, beautifully cooked meat. Lucky, lucky Gioacchino Rossini and King Tum-Tum to be remem- bered in this way.

Peche Nellie Melba was originally creat- ed by Escoffier in 1894. The Australian opera-singer was living at the Savoy Hotel, where the great chef was fortuitously chef de cuisine after being tempted over from the Grand Hotel in Monte Carlo by Mr Ritz himself. Having watched Lohengrin in seats given him by Melba, Escoffier thanked her by having a swan cut out of a block of ice in between whose wings he inserted a silver mug containing vanilla ice- cream, 'white and tender-fleshed', poached, peeled peaches, and a purée of fresh rasp- berries, all under 'a light veil of spun sugar'. The two great artists, Melba and Escoffier, had come together to produce a masterpiece which the Connaught, in def- erence to M. Bourdin's posthumous men- tor, recreates nightly with dedication and flair. When Petronella's long-awaited career as an opera-singer finally comes to fruition, I suspect there'll be free tickets on the first night for Michel Bourdin.