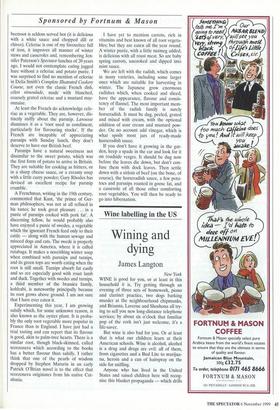 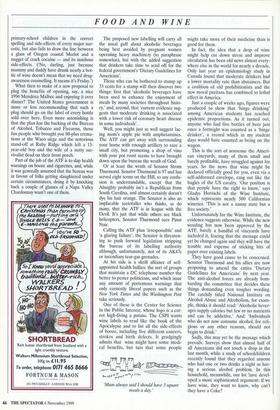 Wine labelling in the US

New York WINE is good for you, or at least in this household it is. Try getting through an evening of three sets of homework, piano and clarinet practice, two dogs barking murder at the neighbourhood chipmunks, and Brianna, Laverne and Shoshona all try- ing to sell you new long-distance telephone services; by about six o'clock that familiar pop of the cork isn't just welcome, it's a life-saver.

But wine is also bad for you. Or at least that is what our children learn at their American schools. Wine is alcohol, alcohol is a drug and drugs are evil: all of them, from cigarettes and a Bud Lite to marijua- na, heroin and a can of hairspray on the side for sniffing.

Anyone who has lived in the United States and raised children here will recog- nise this blanket propaganda — which drills primary-school children in the correct spelling and side-effects of every major nar- cotic, but also fails to draw the line between a glass of Oregon coastal Merlot and a nugget of crack cocaine — and its insidious side-effects. (`No, darling, just because mummy and daddy have drunk nearly a bot- tle of wine doesn't mean that we need drug- awareness counselling. It means it's Friday.') What then to make of a new proposal to plug the benefits of opening, say, a nice 1996 Mendoza Malbec and enjoying it over dinner? The United States government is more or less recommending that such a plug should go on the label of every bottle sold over here. Even more astonishing is that the plan has the backing of the Bureau of Alcohol, Tobacco and Firearms, those fun people who brought you 80-plus crema- tions at the Waco siege and the notorious stand-off at Ruby Ridge which left a 13- year-old boy and the wife of a nutty sur- vivalist dead on their front porch.

Part of the job of the ATF is to slap health warnings on booze and cigarettes, and, while it was generally assumed that the bureau was in favour of folks getting slaughtered under certain circumstances, doing it by knocking back a couple of glasses of a Napa Valley Chardonnay wasn't one of them. The proposed new labelling will carry all the usual guff about alcoholic beverages being best avoided by pregnant women operating heavy machinery (to paraphrase somewhat), but with the added suggestion that drinkers take time to send off for the federal government's 'Dietary Guidelines for Americans'.

Those who can be bothered to stump up 33 cents for a stamp will then discover two things: first that 'alcoholic beverages have been used to enhance the enjoyment of meals by many societies throughout histo- ry,' and, second, that 'current evidence sug- gests that moderate drinking is associated with a lower risk of coronary heart disease in some individuals'.

Well, you might just as well suggest lac- ing mom's apple pie with amphetamines. The ATF can get away with surrounding your home with enough artillery to raze a small city, but promoting a drop of vino with your pot roast seems to have brought down upon the bureau the wrath of God.

Or at least the wrath of Senator Strom Thurmond. Senator Thurmond is 97 and has served eight terms on the Hill, so any confu- sion is understandable, except that the Almighty probably isn't a Republican from South Carolina, and almost certainly doesn't dye his hair orange. The Senator is also an implacable teetotaller who thinks, as do many, that the ATF is in league with the Devil. It's just that while others see black helicopters, Senator Thurmond sees Pinot Noir.

Calling the ATF plan 'irresponsible' and 'a glaring failure', the Senator is threaten- ing to push forward legislation stripping the bureau of its labelling authority although, unfortunately, not of its AK47s or incendiary tear-gas grenades.

At his side is a shrill alliance of self- appointed health bullies: the sort of groups that maintain a DC telephone number the better to pester politicians, and which issue any amount of portentous warnings that only earnestly liberal papers such as the New York Tunes and the Washington Post take seriously.

One of these is the Center for Science in the Public Interest, whose logo is a car- rot high-fiving a potato. The CSPI wants wine labels to read like the book of the Apocalypse and to list all the side-effects of booze, including five different cancers, strokes and birth defects, It grudgingly admits that wine might have some medi- cal benefits, but tuts that some people Mum always said I should have 3 square meals a day.' might take more of their medicine than is good for them.

In fact, the idea that a drop of wine might help cut down stress and improve circulation has been old news almost every- where else in the world for nearly a decade. Only last year an epidemiology study in Canada found that moderate drinkers had a lower mortality rate than abstainers. But a coalition of old prohibitionists and the new moral puritans has combined to lethal effect in America.

Just a couple of weeks ago, figures were produced to show that 'binge drinking' among American students has reached epidemic proportions. As it turned out, anyone who had five bottles of beer just once a fortnight was counted as a 'binge drinker', a record which in my student days would have counted as being on the wagon.

This is the sort of nonsense the Ameri- can vineyards, many of them small and barely profitable, have struggled against for years. So the news that wine might be declared officially good for you, even via a self-addressed envelope, rang out like the bugles of the US cavalry. 'Our position is that people have the right to know,' says Gladys Horiuchi of the Wine Institute, which represents nearly 500 Californian wineries. 'This is not a nanny state but a free society.'

Unfortunately for the Wine Institute, the evidence suggests otherwise. While the new wording has now been approved by the ATF, barely a handful of vineyards have included it, fearing that the message could yet be changed again and they will have the trouble and expense of sticking bits of paper over existing labels.

They have good cause to be concerned. Senator Thurmond and his allies are now proposing to amend the entire 'Dietary Guidelines for Americans' by next year. The anti-alcohol forces are already bom- barding the committee that decides these things demanding even tougher wording. The catchily titled National Institute on Alcohol Abuse and Alcoholism, for exam- ple, thinks it should read: 'Alcoholic bever- ages supply calories but few or no nutrients and can be addictive.' And: 'Individuals who do not now consume alcohol, for reli- gious or any other reasons, should not begin to drink.'

Sadly, this may yet be the message which prevails. Surveys show that almost half of all Americans did not touch a drop in the last month, while a study of schoolchildren recently found that they regarded anyone who had one or two drinks a night as hav- ing a serious alcohol problem. In this household, meanwhile, our lot have devel- oped a more sophisticated argument: if we have wine, they want to know, why can't they have a Coke?