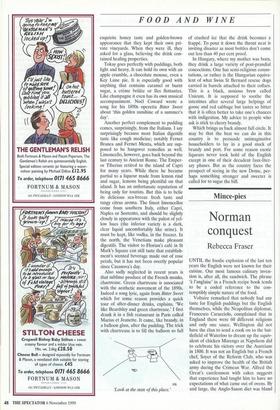 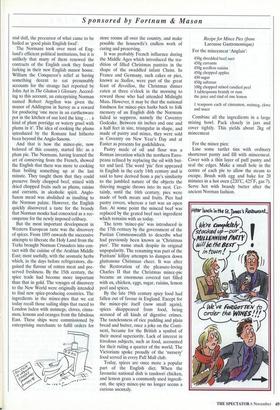 UNTIL the foodie explosion of the last ten years the English were not known for their cuisine. Our most famous culinary inven- tion is, after all, the sandwich. The phrase 'a l'anglaise' in a French recipe book tends to be a coded reference to the con- temptibly simple nature of the food.

Voltaire remarked that nobody had any taste for English puddings but the English themselves, while the Neapolitan diplomat, Francesco Caracciolo, complained that in England there were 60 different religions and only one sauce. Wellington did not have the elan to send a cook on to the bat- tlefield of Waterloo to dream up the equiv- alent of chicken Marengo as Napoleon did to celebrate his victory over the Austrians in 1800. It was not an English but a French chef, Soyer of the Reform Club, who was asked to improve the health of the British army during the Crimean War. Alfred the Great's carelessness with cakes suggests that experience had taught him to have no expectations of what came out of ovens. By and large, the Anglo-Saxon diet was bland and dull, the precursor of what came to be hailed as 'good plain English food'.

The Normans took over most of Eng- land's efficient political institutions, but it is unlikely that many of them renewed the contracts of the English cook they found lurking in their new English manor house. William the Conqueror's relief at having something decent to eat presumably accounts for the strange fact reported by John Ayt in The Glutton's Glossary. Accord- ing to this account, an enterprising Norman named Robert Argyllon was given the manor of Addington in Surrey as a reward for producing 'one mess in an earthenware pot in the kitchen of our lord the king ... a kind of plum porridge or watery gruel with plums in it'. The idea of cooking the plums introduced by the Romans had hitherto been beyond the Anglo-Saxons.

And that is how the mince-pie, now beloved of this country, started life: as a plum pie. The Normans, having learned the art of conserving from the French, showed the English that there was more to cooking than boiling something up at the last minute. They taught them that they could preserve finely chopped beef, mixed with dried chopped fruits such as plums, raisins and currants, in alcoholic spirit. Anglo- Saxon mead was abolished as insulting to the Norman palate. However, the English quickly discovered a taste for the brandy that Norman monks had concocted as a rec- ompense for the newly imposed celibacy.

But the most important development in Western European taste was the discovery of spices. From 1095 onwards the successive attempts to liberate the Holy Land from the Turks brought Norman Crusaders into con- tact with the cuisine of the Arabian Middle East; most usefully, with the aromatic herbs which, in the days before refrigerators, dis- guised the flavour of rotten meat and pre- served freshness. By the 15th century, the spice trade had become more important than that in gold. The voyages of discovery to the New World were originally intended to find new spice-producing countries. The ingredients in the mince-pies that we eat today recall those sailing ships that raced to London laden with nutmegs, cloves, cinna- mon, lemons and oranges from the fabulous East. These ships were commissioned by enterprising merchants to fulfil orders for store rooms all over the country, and make possible the housewife's endless work of curing and preserving.

It was probably French influence during the Middle Ages which introduced the tra- dition of filled Christmas pastries in the shape of the swaddled infant Christ. In France and Germany, such cakes or pies, known as Stollen, were part of the great feast of Reveillon, the Christmas dinner eaten at three o'clock in the morning to reward those who had attended Midnight Mass. However, it may be that the national fondness for mince-pies harks back to folk memory of an English dish the Normans failed to suppress, namely the Coventry Godcake. Between six inches and one and a half feet in size, triangular in shape, and made of pastry and mince, they were sold in Coventry on New Year's Day and at Easter as presents for godchildren.

Pastry made of oil and flour was a Roman invention which the northern Euro- peans refined by replacing the oil with but- ter and lard. The word 'pie' first appeared in English in the early 14th century and is said to have derived from a pie's similarity to the jumbled nature of the objects the thieving magpie throws into its nest. Cer- tainly, until the 16th century, pies were made of both meats and fruits. Pies had pastry covers, whereas a tart was an open flan. At some point the minced beef was replaced by the grated beef suet ingredient which remains with us today.

The term 'mince-pie' was introduced in the 17th century by the government of the Puritan Commonwealth to describe what had previously been known as 'Christmas pies'. The name stuck despite its original unpopularity. The renaming was part of the Puritans' killjoy attempts to dampen down gluttonous Christmas cheer. It was after the Restoration of the pleasure-loving Charles II that the Christmas mince-pie became an enormous covered tart filled with ox, chicken, eggs, sugar, raisins, lemon peel and spices.

By the late 19th century spicy food had fallen out of favour in England. Except for the mince-pie itself (now small again), spices disappeared from food, being accused of all kinds of digestive crimes. The tastelessness of rice pudding and plain bread and butter, once a joke on the Conti- nent, became for the British a symbol of their moral superiority. Lack of interest in frivolous subjects, such as food, accounted for their ruling a quarter of the world. The Victorians spoke proudly of the 'nursery' food served in every Pall Mall club.

Today, spices are once more a popular part of the English diet. When the favourite national dish is tandoori chicken, and lemon grass a commonly used ingredi- ent, the spicy mince-pie no longer seems a curious anomaly. Recipe for Mince Pies (from Larousse Gastronomique) For the mincemeat 'Anglais':

Combine all the ingredients in a large mixing bowl. Pack closely in jars and cover tightly. This yields about 2kg of mincemeat For the mince pies:

Line some tartlet tins with ordinary shortcrust pastry and fill with mincemeat. Cover with a thin layer of puff pastry and seal the edges. Make a small hole in the centre of each pie to allow the steam to escape. Brush with egg and bake for 20 minutes in a hot oven (220'C, 425°F, gas 7). Serve hot with brandy butter after the ancient Norman fashion.