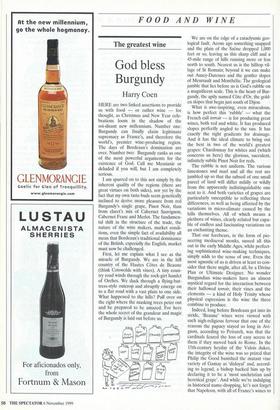 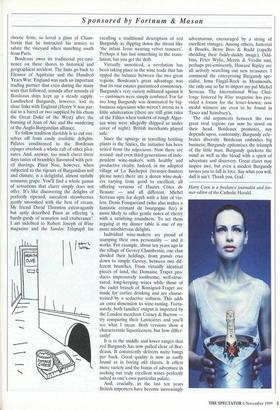 Harry Coen HERE are two linked assertions to provide us with food — or rather wine — for thought, as Christmas and New Year cele- brations loom in the shadow of the soi-disant new millennium. Number one: Burgundy can finally claim legitimate supremacy as France's, and therefore the world's, premier wine-producing region. The days of Bordeaux's domination are over. Number two: Burgundy ranks as one of the most powerful arguments for the existence of God. Call me Messianic or deluded if you will, but I am completely serious.

I am spurred on to this not simply by the inherent quality of the regions (there are great virtues on both sides), nor yet by the fact that my own taste-buds seem genetically inclined to derive more pleasure from red Burgundy's single grape, Pinot Noir, than from claret's mix of Cabernet Sauvignon, Cabernet Franc and Merlot. The fundamen- tal shift in the structure of the trade, the nature of the wine makers, market condi- tions, even the simple fact of availability all mean that Bordeaux's traditional dominance of the British, especially the English, market must now be challenged.

First, let me explain what I see as the miracle of Burgundy. We are in the hill country of the Hautes Cotes de Beaune (think Cotswolds with vines). A tiny coun- try road winds through the rock-girt hamlet of Orches. We duck through a flying-but- tress-style outcrop and abruptly emerge on to a flat road with a vast plain to one side. What happened to the hills? Pull over on the right where the masking trees peter out and be prepared to be amazed. For here the whole secret of the grandeur and magic of Burgundy is laid out before us. We are on the edge of a cataclysmic geo- logical fault. Aeons ago something snapped and the plain of the Saone dropped 1,000 feet or so, leaving us this sharp cliff and a 45-mile range of hills running more or less north to south. Nearest us is the hilltop vil- lage of St Romain; beyond it we can make out Auxey-Duresses and the gentler slopes of Meursault and Monthelie. The geological jumble that lies before us is God's rubble on a magnificent scale. This is the heart of Bur- gundy, the aptly named Cote d'Or, the gold- en slopes that begin just south of Dijon.

What is awe-inspiring, even miraculous, is how perfect this 'rubble' — what the French call terroir — is for producing great wines, both red and white. It has produced slopes perfectly angled to the sun. It has exactly the right gradients for drainage. And it has the ideal climate to bring out the best in two of the world's greatest grapes: Chardonnay for whites and (which concerns us here) the glorious, succulent, infinitely subtle Pinot Noir for reds.

The rubble is not uniform. The various limestones and marl and all the rest are jumbled up so that the subsoil of one small parcel of land will differ mildly or wildly from the apparently indistinguishable one next to it. And both varieties of grapes are particularly susceptible to reflecting these differences, as well as being affected by the variations in micro-climate caused by the hills themselves. All of which means a plethora of wines, clearly related but capa- ble of endless and fascinating variations on an enchanting theme.

That our forebears, in the form of pio- neering mediaeval monks, sussed all this out in the early Middle Ages, while perfect- ing sophisticated wine-making techniques, simply adds to the sense of awe. Even the most agnostic of us is driven at least to con- sider that there might, after all, be a Divine Plan or Ultimate Designer. No wonder Burgundian wine-makers have an almost mystical regard for the interaction between their hallowed terroir, their vines and the elements — a kind of Holy Trinity whose physical expression is the wine the three combine to produce.

Indeed, long before Bordeaux got into its stride, 'Beaune' wines were viewed with such nigh-religious fervour that one of the reasons the papacy stayed so long in Avi- gnon, according to Petrarch, was that the cardinals feared the loss of easy access to them if they moved back to Rome. In the 15th-century heyday of the Valois dukes, the integrity of the wine was so prized that Philip the Good banished the mutant vine variety of Gamay as 'disloyal' and, accord- ing to legend, a bishop backed him up by declaring it to be a 'most unchristian and heretical grape'. And while we're indulging in historical name-dropping, let's not forget that Napoleon, with all of France's wines to choose from, so loved a glass of Cham- bertin that he instructed his armies to salute the vineyard when marching south from Paris.

Bordeaux owes its traditional pre-emi- nence on these shores to historical and geographical accident. The links go back to Eleanor of Aquitaine and the Hundred Years War. England was such an important trading partner that even during the many wars that followed, armada after armada of Bordeaux ships kept up a steady supply. Landlocked Burgundy, however, lost its close links with England (Henry V was par- tial to a barrel or two supplied by his chum the Great Duke of the West) after the burning of Joan of Arc and the sundering of the Anglo-Burgundian alliance.

To follow tradition slavishly is to cut our- selves off from easily available delights. Palates conditioned to the Bordeaux cdpages overlook a whole raft of other plea- sures. And, anyway, too much claret these days tastes of brambles flavoured with pen- cil shavings. Pinot Noir, however, when subjected to the rigours of Burgundian soil and climate, is a delightful, almost sinfully sensuous grape. You'll find a whole gamut of sensations that claret simply does not offer. It's like discovering the delights of perfectly ripened, succulent strawberries gently smoothed with the best of cream. My friend David Thornton extravagantly but aptly described Pinot as offering 'a hurdy-gurdy of sensation and exuberance'. I am indebted to Robert Joseph of Wine magazine and the Sunday Telegraph for

recalling a traditional description of red Burgundy as slipping down the throat like 'the infant Jesus wearing velvet trousers'. Perhaps it has lost something in the trans- lation, but you get the drift.

Virtually unnoticed, a revolution has been taking place in the wine trade that has tipped the balance between the two great regions. Bordeaux's great advantage was that its vast estates guaranteed consistency. Burgundy's very variety militated against it — customers were simply confused. For far too long Burgundy was dominated by big- business negotiants who weren't averse to a little adulteration (there are still grim tales of the Fifties when tankers of rough Alger- ian wine were allegedly shipped in under cover of night). British merchants played safe.

Since the upsurge in travelling bottling plants in the Sixties, the initiative has been seized from the negotiants. Now there are second- and even third-generations of inde- pendent wine-makers, with healthy and productive rivalry. Indeed, in my adopted village of La Rochepot (treasure-hunters please note) there are a dozen wine-mak- ers varying from good to excellent, all offering versions of Hautes Cotes de Beaune — and all different. Michel Serveau opts for depth with a hint of vio- lets; Denis Fouquerand (who also makes a fantastic crdmant de bourgogne fizz) is more likely to offer gentle notes of cherry with a satisfying roundness. To set them arguing at my dinner table is one of my more mischievous delights.

Individual wine-makers are proud of stamping their own personality — and it works. For example, about ten years ago in the village of Gevrey Chambertin, one clan divided their holdings, from rands cats down to simple Gevrey, between two dif- ferent branches. From virtually identical pieces of land, the Domaine Trapet pro- duces impressively toothsome, well-struc- tured, long-keeping wines while those of the cadet branch of Rossignol-Trapet are made for earlier drinking and are charac- terised by a seductive softness. This adds an extra dimension to wine-tasting. Fortu- nately, both families' output is imported by the London merchant Corney & Barrow try comparing their Latriciares and you'll see what I mean. Both versions show a characteristic liquoriceness, but how differ- ently!

It is in the middle and lower ranges that red Burgundy has now pulled clear of Bor- deaux. It consistently delivers more bangs per buck. Good quality is now as easily found as in boring old clarets. It offers more variety and the bonus of adventure in seeking out truly excellent wines perfectly suited to one's own particular palate.

And, crucially, in the last ten years British importers have become increasingly

adventurous, encouraged by a string of excellent vintages. Among others, Justerini & Brooks, Berry Bros & Rudd (rapidly shedding their fuddy-duddy image), Odd- bins, Peter Wylie, Morris & Verdin and, perhaps pre-eminently, Howard Ripley are all actively searching out new treasures. I commend the enterprising Burgundy spe- cialist, Irma Fingal-Rock in Monmouth, the only one so far to import my pal Michel Serveau. The International Wine Chal- lenge fostered by Wine magazine has pro- vided a forum for the lesser-known; now medal winners are even to be found in Tesco and Sainsbury's.

The old arguments between the two great rival regions can now be stood on their head. Bordeaux promotes, nay depends upon, conformity; Burgundy cele- brates diversity. Bordeaux embodies big business; Burgundy epitomises the triumph of the little man. Burgundy quickens the mind as well as the blood with a spirit of adventure and discovery. Great claret may inspire awe, but even a modest Burgundy invites you to fall in love. Say what you will, dull it ain't. Thank you, God.

Harry Coen is a freelance journalist and for- mer editor of the Catholic Herald.