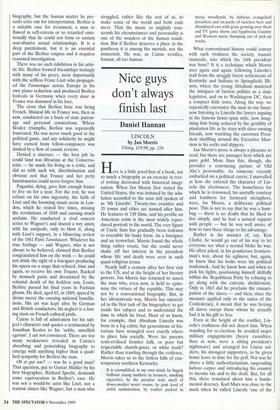 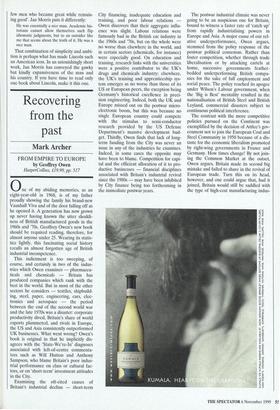 LINCOLN by Jan Morris Viking, £19.99, pp. 216 Here is a little jewel-box of a book, not so much a biography as an exercise in trav- el writing decorated with historical imagi- nation. When Jan Morris first visited the United States, she was irritated by the adu- lation accorded to the man still spoken of as 'Mr Lincoln'. Twenty-two counties and 35 towns and cities are named after him. He features in 130 films, and his profile on American coins is the most widely repro- duced portrait in the world. The very figure of Uncle Sam has gradually been redrawn to resemble his lanky form. As a foreigner and an iconoclast, Morris found the whole thing rather ersatz, but she could never shake off her interest in the president whose life and death were seen in such quasi-religious terms.

Nearly half a century after her first visit to the US, and at the height of her literary powers, Jan Morris has returned to assess the man who, even now, is held to epito- mise the virtues of the republic. This may not be a conventional biography. But, in her idiosyncratic way, Morris has succeed- ed in the first task of the biographer: to get inside her subject and to understand the time in which he lived. Most of us know, for example, that Abraham Lincoln was born in a log cabin; but generations of his- torians have wrangled over exactly where to place him socially. Were his parents semi-civilised frontier folk, or poor but respectable church-goers, or white trash? Rather than trawling through the evidence, Morris takes us to the listless hills of con- temporary northern Kentucky:

It is exemplified, in my own mind, by hugely bulbous young mothers in trousers, smoking cigarettes, by the peculiar stale smell of down-market motel rooms, by junk food of awful malnutrition, by trailers parked in

messy woodlands, by dubious evangelical preachers and six-packs of tasteless beer and abandoned cars with grass growing over them and TV game shows and lugubrious Count!), and Western music thumping out of pick-up trucks.

What conventional history could convey with such vividness the society, mutatis mutandis, into which the 16th president was born? It is a technique which Morris uses again and again, following Lincoln's trail from the straggly forest settlements of Kentucky and Indiana to Springfield, Illi- nois, where the young Abraham mastered the intrigues of faction politics as a state legislator, and on to Washington DC, then a compact little town. Along the way, we repeatedly encounter the man in our fancy: now listening to Lincoln the lawyer arguing in his famous home-spun style, now imag- ining him being seduced by the gentility of plantation life as he stays with slave-owning friends, now watching the careworn Presi- dent shuffling around the Executive Man- sion in his socks and slippers.

Jan Morris's prose is always a pleasure to read, but there are passages here which are pure gold. More than this, though, she provides a convincing picture of Old Abe's personality. As someone recently embarked on a political career, I marvelled at how she entered the character of Lin- coln the electioneer. The homeliness for which he is renowned, his unstuffy courtesy and fondness for farmyard metaphors, were, for Morris, a deliberate political pose. This is not to say that he was a hum- bug — there is no doubt that he liked to live simply, and he had a natural rapport with people — but he was well aware of how to turn these things to his advantage.

Rather in the manner of, say, Ken Clarke, he would go out of his way to let everyone see what a normal bloke he was. He often joked, in his ponderous frontiers- man's way, about his ugliness; but, again, he knew that his looks were his political trademark. And he knew how and when to pick his fights, positioning himself skilfully within the Republican Party by refusing to go along with the extreme abolitionists. Only in 1863 did he proclaim the emanci- pation of the slaves — and then, since the measure applied only to the states of the Confederacy, it meant that he was freeing all slaves except those whom he actually had it in his gift to free.

Even at the height of the conflict, Lin- coln's craftiness did not desert him. When standing for re-election, he avoided major military engagements (heavy casualties, then as now, were a sitting president's nightmare) and arranged for Union sol- diers, his strongest supporters, to be given home leave in time for the poll. Nor was he above a little authoritarianism, suspending habeas corpus and introducing his country to income tax and to the draft. But, for all this, there remained about him a funda- mental decency. Karl Marx was close to the mark when he called Lincoln 'one of the

He was essentially a nice man. Academic his- torians cannot allow themselves such flip idiomatic judgments, but to an outsider like me that seems about the truth of it. He was a nice man.

That combination of simplicity and ambi- tion is perhaps what has made Lincoln such an American icon. In an astonishingly short work, Jan Morris has conveyed the gawky but kindly expansiveness of the man and his country. If you have time to read only one book about Lincoln, make it this one.