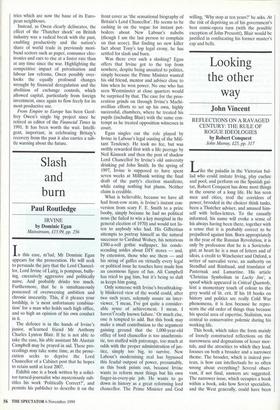 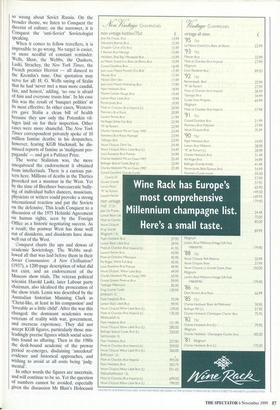 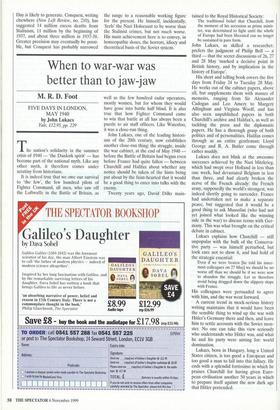 Looking the other way

Like the paladin in the Victorian bal- lad who could imitate Irving, play euchre and pool, and perform on the Spanish gui- tar, Robert Conquest has done most things in the course of a long life. He has seen men and cities, trod the corridors of power, brooded in the choicer think tanks, been a Thatcher adviser, and amused him- self with belles-lettres. To the casually informed, his name will evoke a sense of his always having been there, together with a sense that it is probably correct to be prejudiced against him. Born appropriately in the year of the Russian Revolution, it is only by profession that he is a Sovietolo- gist; at heart he is a man of letters and of ideas, a credit to Winchester and Oxford, a writer of surrealist verse, an authority on Stendhal and Rimbaud, and translator of Pasternak and Lamartine. His article 'Christian Symbolism in Lucky Jim', a spoof which appeared in Critical Quarterly, lent a momentary touch of colour to the grey world of lit. crit. If his 18 books on history and politics are really Cold War phenomena, it is less because he repre- sents the old order of things than because his special area of expertise, Stalinism, was central to conservative polemic during his working life.

This book, which takes the form mainly of loosely constructed reflections on the narrowness and dogmatisms of lesser mor- tals, and the atrocities to which they lead, focuses on both a broader and a narrower theme. The broader, which is indeed pro- tean, is how can intellectuals be so often wrong about everything? Several obser- vant, if not final, answers are suggested. The narrower issue, which occupies a book within a book, asks how Soviet specialists, and the West generally, could have been so wrong about Soviet Russia. On the broader theme, we listen to Conquest the theorist of culture; on the narrower, it is Conquest the 'anti-Soviet' Sovietologist speaking.

When it comes to fellow travellers, it is impossible to go wrong. No target is easier, or more needful of constant reminder.

Wells, Shaw, the Webbs, the Quakers, Laski, Strachey, the New York Times, the

French premier Herriot - all danced to the Kremlin's tune. One quotation may serve for all: H. G. Wells saying of Stalin

that he had 'never met a man more candid, fair, and honest,' adding, 'no one is afraid of him and everyone trusts him'. In his case this was the result of 'banquet politics' at its most effective. In other cases, Western- ers gave Stalin a clean bill of health because they saw only the Potemkin vil- lages laid on for their inspection. Other cases were more shameful. The New York Times correspondent privately spoke of 10 million famine deaths; in his despatches, however, fearing KGB blackmail, he dis- missed reports of famine as 'malignant pro- paganda' - and got a Pulitzer Prize.

The worse Stalinism was, the more unequivocal the endorsement it obtained from intellectuals. There is a curious pat- tern here. Millions of deaths in the Thirties provoked not a murmur in the West. Yet by the time of Brezhnev bureaucratic bully- ing of individual ballet dancers, musicians, physicists or writers could provoke a strong international reaction and put the Soviets on the defensive. This leads Conquest to a discussion of the 1975 Helsinki Agreement on human rights, seen by the Foreign Office as a historic negotiating success. As a result, the postwar West has done well out of dissidents, and dissidents have done well out of the West.

Conquest charts the ups and downs of academic Sovietology. The Webbs swal- lowed all that was laid before them in their Soviet Communism: A New Civilisation? (1937), a 1200-page description of what did not exist, and an endorsement of the Moscow show trials. The veteran political scientist Harold Laski, later Labour party chairman, also idealised the prosecution of the show trials. Lenin was described by the Australian historian Manning Clark as 'Christ-like, at least in his compassion' and 'loveable as a little child'. After the war this changed; the dominant academics were veterans of reality with war, government, and overseas experience. They did not accept KGB figures, particularly those mis- leadingly precise figures which social scien- tists found so alluring. Then in the 1980s the desk-bound academic of the prewar period re-emerges, disdaining 'anecdotal' evidence and historical approaches, and wishing to avoid at all costs being 'judg- mental'.

In other words the figures are uncertain, and will continue to be so. Yet the question of numbers cannot be avoided, especially given the discussion Mr Blair's Holocaust

Day is likely to generate. Conquest, writing elsewhere (New Left Review, no. 210), has suggested 14 million excess deaths from Stalinism, 11 million by the beginning of 1937, and about three million in 1937-38. Greater precision may eventually be possi- ble, but Conquest has probably narrowed the range to a reasonable working figure for the present. He himself, incidentally, 'feels' the Nazi Holocaust to be worse than the Stalinist crimes, but not much worse. His main achievement here is to convey, in homeopathic doses, the horrors, idiocy and theoretical basis of the Soviet system.