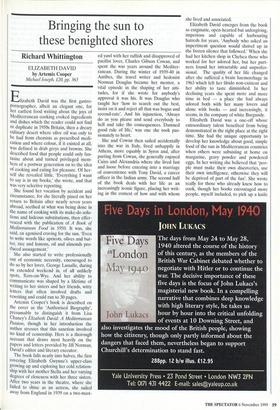 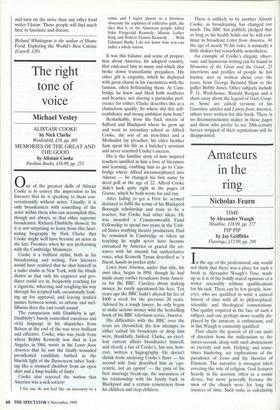 Page 59, 6 November 1999 — Bringing the sun to these benighted shores
Close

Bringing the sun to these benighted shores

Elizabeth David was the first gastro- Pornographer, albeit an elegant one, for her earliest food writing about the joys of Mediterranean cooking evoked ingredients and dishes which the reader could not find or duplicate in 1950s Britain, then a dreary culinary desert where olive oil was only to be had from chemists as prescribed medi- cation and where colour, if it existed at all, was defined in drab greys and browns. She described food that people could only fan- tasise about and turned privileged mem- bers of a postwar generation on to the idea of cooking and eating for pleasure. Of her- self she revealed little. 'Everything I want to say is in my books,' she wrote, and that was very selective reporting.

She found her vocation by accident and circumstance, for she literally pined on her return to Britain after nearly seven. years abroad, seethed at what was being done in the name of cooking with its make-do solu- tions and hideous substitutions, then effer- vesced with the publication of A Book of Mediterranean Food in 1950. It was, she said, an agonised craving for the sun. 'Even to write words like apricots, olives and but- ter, rice and lemons, oil and almonds pro- duced assuagement.'

She also started to write professionally out of economic necessity, encouraged to do so by her lover, George Lassalle, during an extended weekend in, of all unlikely spots, Ross-on-Wye. And her ability to communicate was shaped by a lifetime of writing to her sisters and her friends, witty letters that often involved drafts and rewriting and could run to 30 pages.

Artemis Cooper's book is described on the cover as the 'Authorised Biography', presumably to distinguish it from Lisa Chaney's Elizabeth David: A Mediterranean Passion, though in her introduction the author stresses that this sanction involved no kind of censorship. Hers is a thorough account that draws most heavily on the papers and letters provided by Jill Norman, David's editor and literary executor.

The book falls neatly into halves, the first covering Elizabeth Gwynne's upper-class growing up and exploring her cold relation- ship with her mother Stella and her varying degrees of closeness with her three sisters. After two years in the theatre, where she failed to shine as an actress, she sailed away from England in 1939 on a two-mast-

ed yawl with her raffish and disapproved of pacifist lover, Charles Gibson Cowan, and spent the war years around the Mediter- ranean. During the winter of 1939-40 in Antibes, the travel writer and hedonist Norman Douglas became her mentor, a vital episode in the shaping of her atti- tudes, for if she wrote for anybody's approval it was his. It was Douglas who taught her 'how to search out the best, insist on it and reject all that was bogus and second-rate'. And his injunction, 'Always do as you please and send everybody to hell and take the consequences. Damned good rule of life,' was one she took pas- sionately to heart.

She and Cowan then sailed accidentally into the war in Italy, lived unhappily in Athens, more equably in Syros and, after parting from Cowan, she generally enjoyed Cairo and Alexandria where she lived fast and loose before entering into a marriage of convenience with Tony David, a career officer in the Indian army. The second half of the book deals with her life as an increasingly iconic figure, placing her writ- ing in the context of how and with whom she lived and associated.

Elizabeth David emerges from the book as enigmatic, open-hearted but unforgiving, imperious and capable of harbouring hatreds for years. 'Anybody who asked an impertinent question would shrivel up in the frozen silence that followed.' When she had her kitchen shop in Chelsea those who worked for her adored her, but her part- ners found her intractable and unprofes- sional. The quality of her life changed after she suffered a brain haemorrhage in 1963 which left her libido non-existent and her ability to taste diminished. In her declining years she spent more and more time in bed — a place she had always adored both with her many lovers and alone with books — and increasingly, it seems, in the company of white Burgundy.

Elizabeth David was a one-off whose extraordinary talent benefited from being demonstrated in the right place at the right time. She had the unique opportunity to develop her knowledge about good, simple food of the sun in Mediterranean countries when others were subsisting at home on margarine, gravy powder and powdered eggs. In her writing she believed that 'peo- ple must make their own discoveries, use their own intelligence, otherwise they will be deprived of part of the fun'. She wrote really for those who already knew how to cook, though her books encouraged more people, myself included, to pick up a knife

and turn on the stove than any other food writer I know. Those people will find much here to fascinate and discuss.