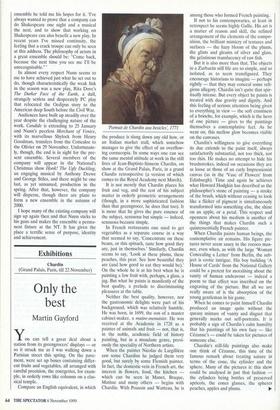 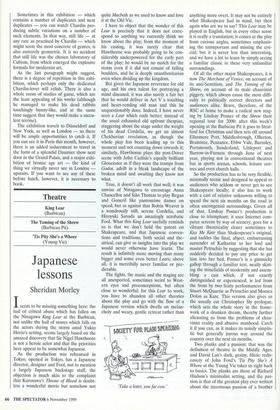 You can tell a great deal about a nation from its greengrocers' displays — or so it struck me as I was walking down a Parisian street this spring. On the pave- ment, were set up boxes containing differ- ent fruits and vegetables, all arranged with careful precision, the courgettes, for exam- ple, in orderly rows like columns on a clas- sical temple.

Compare an English equivalent, in which

Portrait de Chardin aux besides', 1771 the produce is slung down any old how, or an Italian market stall, which somehow manages to give the effect of an overflow- ing cornucopia. In some ways one can see the same mental attitude at work in the still lives of Jean-Baptiste-Simeon Chardin, on show at the Grand Palais, Paris, in a grand Chardin retrospective (a version of which comes to the Royal Academy next March).

It is not merely that Chardin places his fruit and veg, and the rest of his subject matter in orderly geometric arrangements (though, in a more sophisticated fashion than that greengrocer, he does that too). It is more that he gives the pure essence of the subject, sensuous but simple — indeed, sensuous because simple.

In French restaurants one used to get vegetables as a separate course in a way that seemed to say, 'Concentrate on these beans, or this spinach, taste how good they are, just in themselves.' Similarly, Chardin seems to say, 'Look at these plums, these peaches, this pear. See how beautiful they are (and how good to eat they would be).' On the whole he is at his best when he is painting a few fruit with, perhaps, a glass, a jug. But what he paints is manifestly of the best quality, a prelude to discriminating pleasures at the table.

Neither the best quality, however, nor the gastronomic delights were part of his background, which was relatively humble. He was born, in 1699, the son of a master cabinet-maker, a maitre-menuisier. He was received at the Academie in 1728 as a painter of animals and fruit — not, that is, in the noble, academic field of history painting, but in a mundane genre, previ- ously the speciality of Northern artists.

When the painter Nicolas de Largilliere saw some Chardins he judged them very good, but surely by some Flemish painter. In fact, the domestic vein in French art, the interest in flowers, food, the kitchen which can be seen in Manet, Braque, Matisse and many others — begins with Chardin. With Poussin and Watteau, he is among those who formed French painting.

If not to his contemporaries, at least in retrospect he seems highly Gallic. His art is a matter of reason and skill, the refined arrangement of the elements of the compo- sition, the brilliant mimicry of textures and surfaces — the hazy bloom of the plums, the glints and gleams of silver and glass, the gelatinous translucency of raw fish.

But it is also more than that. The objects in a Zurbaran still life are so simple, and so isolated, as to seem transfigured. They encourage historians to imagine — perhaps rightly — that they may conceal some reli- gious allegory. Chardin isn't quite that spir- itually intense. But every object he paints is treated with due gravity and dignity. And this feeling of serious attention being given to everything in view — the soft crustiness of a brioche, for example, which is the hero of one picture — gives to the paintings themselves a contemplative feel. As he went on, this mellow glow becomes visible on the canvases.

Chardin's willingness to give everything its due extends to the paint itself, always satisfactorily substantial, not too thick, not too thin. He makes no attempt to hide his brushstrokes, indeed on occasions they are as loose as those of an early Impressionist canvas (as in the 'Vase of Flowers' from Edinburgh). Time and again he achieves what Howard Hodgkin has described as the philosopher's stone of painting — a stroke of the brush, which without ceasing to look like a flicker of pigment is simultaneously transformed into something else, the shine on an apple, or a petal. This respect and openness about his medium is another of the things that makes Chardin such a quintessentially French painter.

When he comes to paint himself Chardin produced an image quite without the queasy mixture of vanity and disgust that generally marks out self-portraits. It is probably a sign of Chardin's calm humility that his paintings of his own face — like Cezanne's — could be taken for pictures of someone else.

Chardin's still-life paintings also make one think of Cezanne, this time of the famous remark about treating nature in terms of the cone, the cylinder and the sphere. Many of the pictures in this show could be analysed in just that fashion the cylinders being bottles of preserved apricots, the cones glasses, the spheres

Sometimes in this exhibition — which contains a number of duplicates and near duplicates — you can watch Chardin pro- ducing subtle variations on a number of such elements. In that way, still life — at any rate as practised by Chardin — which might seem the most concrete of genres, is also austerely geometric. It is no accident that still life was the chosen laboratory of Cubism, from which emerged the explosive formula for modernist art.

As the last paragraph might suggest, there is a degree of repetition in this exhi- bition, which perhaps only the dedicated Chardin-lover will relish. There is also a whole room of studies of game, which are the least appealing of his works (although he managed to make his dead rabbits touchingly bunny-like, and at the same time suggest that they would make a succu- lent terrine).

The exhibition travels to Dilsseldorf and New York, as well as London — so there will be ample opportunities to catch it. If you can see it in Paris this month, however, there is an added inducement to travel in the form of a splendid Daumier show next door in the Grand Palais, and a major exhi- bition of bronze age art — the kind of thing we virtually never see in London upstairs. If you want to see any of these before lunch, however, it is necessary to book.