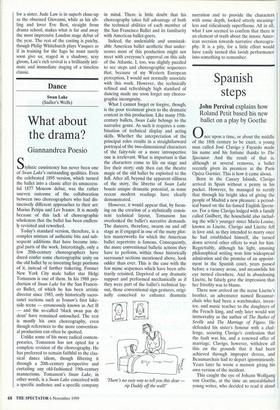 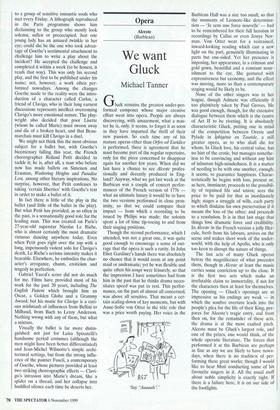 John Percival explains how Roland Petit based his new ballet on a play by Goethe 0 nce upon a time, or about the middle of the 18th century to be exact, a young man called Jose Clavigo y Fayardo made his name and his fortune thanks to The Spectator. And the result of that is, although at several removes, a ballet recently given its premiere at the Paris Opera Gamier. This is how it came about. Born in the Canary Islands, Clavigo arrived in Spain without a penny in his pocket. However, he managed to rectify that through his bright idea of giving the people of Madrid a new pleasure: a period- ical based on the far-famed English Specta- tor. For a time Clavigo lodged with a family called Guilbert, the household also includ- ing the wife's younger sister Marie-Louise, known as Lisette. Clavigo and Lisette fell in love and, as they intended to marry once he had established himself, she turned down several other offers to wait for him. Regrettably, although his light, amusing philosophical writing won him widespread admiration and the promise of an appoint- ment in the Spanish court, years passed before a vacancy arose, and meanwhile his eye turned elsewhere. And in abandoning Lisette, he falsely gave the impression that her frivolity was to blame.

There now arrived on the scene Lisette's brother, an adventurer named Beaumar- chais who had been a watchmaker, inven- tor, and music teacher to the daughters of the French king, and only later would win immortality as the author of The Barber of Seville and The Marriage of Figaro. He defended his sister's honour with a chal- lenge, securing Clavigo's confession that the fault was his, and a renewed offer of marriage. Clavigo, however, withdrew all this on the grounds that it had been achieved through improper duress, and Beaumarchais had to depart ignominiously. Years later he wrote a memoir giving his own version of the incident.

This caught the eye of Johann Wolfgang von Goethe, at the time an unestablished young writer, who decided to read it aloud to a group of sensitive romantic souls who met every Friday. A lithograph reproduced in the Paris programme shows him declaiming to the group who mostly look solemn, sullen or preoccupied. Just one young lady has an amused twinkle in her eye; could she be the one who took advan- tage of Goethe's sentimental attachment to challenge him to write a play about the incident? He accepted the challenge and completed it within a week (to be honest, it reads that way). This was only his second play, and the first to be published under his name; not, however, a work often per- formed nowadays. Among the changes Goethe made to the reality were the intro- duction of a character called Carlos, a friend of Clavigo, who in their long earnest discussions represents intellect overcoming Clavigo's more emotional nature. The play- wright also decided that poor Lisette (whom he called Marie) must swoon away and die of a broken heart, and that Beau- marchais must kill Clavigo in a duel.

We might not think this the most obvious subject for a ballet but, with Goethe's bicentenary falling this year, the French choreographer Roland Petit decided to tackle it; he is, after all, a man who before now has made ballets on Simenon and Erasmus, Wuthering Heights and Paradise Lost, among other literary inspirations. No surprise, however, that Petit confesses to taking 'certain liberties' with Goethe's text in order to make a ballet of it.

In fact there is little of the play in the ballet (and little of the ballet in the play). But what Petit has provided, as so often in the past, is a sensationally good role for the leading man. This was created on Paris's 27-year-old superstar Nicolas Le Riche, who is almost certainly the most dramatic virtuoso dancing anywhere today. Even when Petit goes right over the top with a long, impetuously violent solo for Clavigo's death, Le Riche's serious intensity makes it bearable. Elsewhere, he embodies the char- acter's arrogance, charm, eroticism and tragedy to perfection.

Gabriel Yared's score did not do much for me. Films have provided most of his work for the past 20 years, including The English Patient which brought him an Oscar, a Golden Globe and a Grammy Award, but his music for Clavigo is a curi- ous mishmash of influences from Bellini to Milhaud, from Bach to Leroy Anderson. Nothing wrong with any of them, but what a mixture.

Visually the ballet is far more distin- guished: not just for Luisa Spinatelli's handsome period costumes (although the men might have been better differentiated) and Jean-Michel Wilmotte's simple archi- tectural settings, but from the strong influ- ence of the painter Fuseli, a contemporary of Goethe, whose pictures provided at least two striking choreographic effects — Clavi- go's intrusion into Marie's dream, like a spider on a thread, and her collapse into huddled silence each time he deserts her.