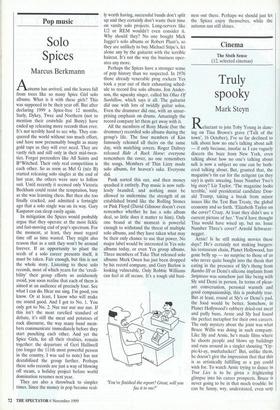 Autumn has arrived, and the leaves fall from trees like so many Spice Girl solo albums. What is it with these girls? This was supposed to be their year off. But after declaring 1999 a Spice-free 12 months, Surly, Dykey, Twee and Northern (not to mention their erstwhile pal Busty) have ended up releasing more records than ever. It's not terribly hard to see why. They con- quered the world without too much effort, and have now presumably bought as many gold taps as they will ever need. They are vastly rich and still only in their mid-twen- ties. Forget pretenders like All Saints and B*Witched. Their only real competition is each other. So as soon as Mel G (nee B) started releasing solo singles at the end of last year, the others were sure to follow suit. Until recently it seemed only Victoria Beckham could resist the temptation, busy as she was learning chess. But then she too finally cracked, and admitted a fortnight ago that a solo single was on its way. Gary Kasparov can sleep easily again.

In mitigation the Spices would probably argue that they operate at the most fickle and fast-moving end of pop's spectrum. For the moment, at least, they must regard time off as time wasted. They might also reason that as a unit they won't be around forever. If an opportunity to plant the seeds of a solo career presents itself, it must be taken. Fair enough, but this is not the whole story. Listening to these solo records, most of which yearn for the 'credi- bility' their group efforts so assiduously avoid, you soon realise that each of them is aimed at an audience of precisely four. See what I can do. Hear me sing. I'm good, you know. Or at least, I know who will make me sound good. And I got to No. 1. You only got to No. 2. Nur nur nur nur nur. If this isn't the most rarefied standard of debate, it's still the meat and potatoes of rock discourse, the way many band mem- bers communicate immediately before they start punching each other. And yet the Spice Girls, for all their rivalries, remain together: the departure of Geri Halliwell (no longer the 111th most powerful person in the country, I was sad to note) has not destabilised the group further. Perhaps these solo records are just a way of blowing off steam, a holiday project before world domination resumes next year.

They are also a throwback to simpler times. Since the money in pop became real-

ly worth having, successful bands don't split up and they certainly don't waste their time on vanity solo projects. Long-servers like U2 or REM wouldn't even consider it. Why should they? No one bought Mick Jagger's solo albums or Robert Plant's, so they are unlikely to buy Michael Stipe's, let alone any by the guitarist with the terrible haircut. It's not the way the business oper- ates any more.

Perhaps the Spices have a stronger sense of pop history than we suspected. In 1976 those already venerable prog rockers Yes took a year out of their exhausting sched- ule to record five solo albums. Jon Ander- son, the squeaky singer, called his Olias Of Sunhillow, which says it all. The guitarist did one with lots of twiddly guitar solos. Even the drummer did one, with an unsur- prising emphasis on drums. Amazingly the record company let them get away with it.

All the members of Roxy Music (bar the drummer) recorded solo albums during the group's life. The four members of Kiss famously released all theirs on the same day, with matching covers. Roger Daltrey released Ride A Rock Horse: everyone remembers the cover, no one remembers the songs. Members of Thin Lizzy made solo albums, for heaven's sake. Everyone did.

Punk sorted this out, and then money quashed it entirely. Pop music is now ruth- lessly branded, and nothing must be allowed to undermine the strength of an established brand like the Rolling Stones or Pink Floyd (David Gilmour doesn't even remember whether he has a solo album deal, so little does it matter to him). Only one brand at the moment is powerful enough to withstand the threat of multiple solo albums, and they have taken what may be their only chance to use that power. No major label would be interested in Yes solo albums today, or even Yes group albums. Three members of Take That released solo albums: Mark Owen has just been dropped by his record company, and Gary Barlow is looking vulnerable. Only Robbie Williams can feel at all secure. It's a tough old busi- You've finished the report? Great, will you fax it to me?' ness out there. Perhaps we should just let the Spices enjoy themselves, while the autumn sun still shines.