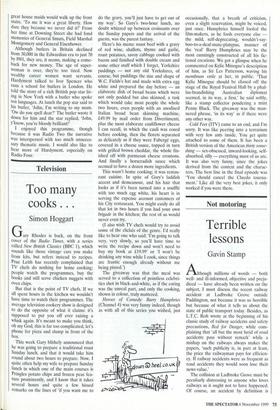 Simon Hoggart Gary Rhodes is back, on the front cover of the Radio Times, with a series called New British Classics (BBC 1), which sounds like those vintage cars you make from kits, but refers instead to recipes. Prue Leith has recently complained that TV chefs do nothing for home cooking; people watch the programmes, buy the books and still serve chicken nuggets with oven chips.

But that is the point of TV chefs. If we all spent hours in the kitchen we wouldn't have time to watch their programmes. The average television cookery show is designed to do the opposite of what it claims: it's supposed to put you off ever raising a whisk again. It's meant to make you think, oh my God, this is far too complicated, let's phone for pizza and slump in front of the box.

This week Gary blithely announced that he was going to prepare a traditional roast Sunday lunch, and that it would take him round about two hours to prepare. Now, I quite often help my wife to prepare Sunday lunch in which one of the main courses is Pringles potato chips and frozen peas fea- ture prominently, and I know that it takes several hours and quite a few hissed remarks on the lines of 'if you want me to do the gravy, you'll just have to get out of my way'. So Gary's two-hour lunch, no doubt whizzed up between croissants over the Sunday papers and the arrival of the guests, was the purest fantasy.

Here's his menu: roast beef with a gravy of red wine, shallots, thyme and garlic, roast potatoes, savoy cabbage cooked with bacon and finished with double cream and some other stuff which I forget, Yorkshire puddings — not any old Yorkshires, of course, but puddings the size and shape of W.C. Fields's hat and made with extra egg white and prepared the day before — an elaborate dish of broad beans which were not only podded but also skinned, a task which would take most people the whole two hours, even people with an anodised Italian broad bean skinning machine, £49.99 by mail order from Divertimenti, plus the most elaborate cauliflower cheese I can recall, in which the cauli was cored before cooking, then the florets separated as delicately as if they were Faberge eggs, covered in a cheese sauce, topped in turn with grilled brown cheddar, the whole fin- ished off with parmesan cheese croutons. And finally a horseradish sauce which seemed to have a dozen more ingredients.

This wasn't home cooking; it was restau- rant cuisine. In spite of Gary's laddish accent and demeanour, and his hair that looks as if it's been turned into a soufflé with too much egg white, his heart is in serving the expense account customers of his City restaurant. You might easily do all that lot in two hours if you had your own brigade in the kitchen; the rest of us would never even try.

(I also wish TV chefs would try to avoid some of the cliches of the genre. I'd really like to hear one who said: 'I'm going to talk very, very slowly, so you'll have time to write the recipe down and won't need to buy my book at £19.99' or 'I won't be drinking any wine while I cook, since things are frantic enough already without me being pissed.') The giveaway was that the meal was served to a collection of pointless celebri- ties shot in black-and-white, as if the eating was the unreal part, and only the cooking, shown in colour, truly mattered.

Heroes of Comedy: Bany Humphries (Channel 4) was very funny indeed, though as with all of this series you wished, just

occasionally, that a breath of criticism, even a slight reservation, might be voiced, just once. Humphries himself fooled the film-makers, as he fools everyone else the mild, self-deprecating, wouldn't-say- boo-to-a-deaf-mute-platypus, manner of the 'real' Barry Humphries may be the most cunningly constructed of all his fic- tional creations. We got a glimpse when he commented on Kylie Minogue's description of him, as Sir Les Patterson, waving his membrum virile at her, in public. 'That Kylie Minogue should be chased off the stage of the Royal Festival Hall by a phal- lus-brandishing Australian diplomat seemed, in its way, a first,' he said softly, like a stamp collector pondering a mint Penny Black. The giveaway was the man- nered phrase, 'in its way' as if there were any other way.

Cold Feet (ITV) came to an end, and I'm sorry. It was like peering into a terrarium with very few ants inside. You get quite attached to some of them. It has been a British version of the American thirty some- thing — sex-obsessed, inward-looking, self- absorbed, silly — everything most of us are. It was also very funny, since the jokes derived from the context and the charac- ters. The best line in the final episode was 'You should cancel the Cluedo tourna- ment.' Like all the very best jokes, it only worked if you were there.