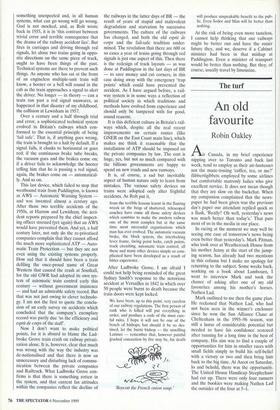 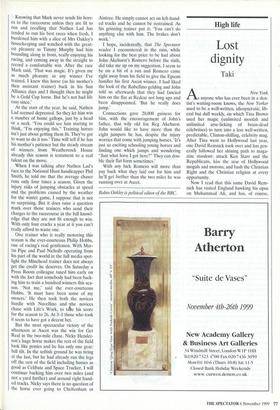 Robin Oakley ACanada, in my brief experience nipping over to Toronto and back last week, tend to employ as their air-hostesses not the mane-tossing 'coffee, tea, or me?' flibbertigibbets employed by some airlines but comfortable matronly ladies who give excellent service. It does not mean though that they are slow on the backchat. When my companion complained that the news- paper he had been given was the previous day's paper our attendant replied quick as a flash, 'Really? Oh well, yesterday's news was much better than today's.' That puts most of us in the media in our place.

In racing at the moment we may well be seeing one case of tomorrow's news being even better than yesterday's. Mark Pitman, who took over at Weathercock House from his mother Jenny at the start of the jump- ing season, has already had two mentions in this column but I make no apology for returning to the subject. Some weeks back, working on a book about Lambourn, I went to interview Mark and took the chance of asking after one of my old favourites among his mother's horses, Nathen Lad.

Mark outlined to me then the game plan. He reckoned that Nathen Lad, who had not been seen in the winner's enclosure since he won the Sun Alliance Chase at Cheltenham in the 1995-96 season, was still a horse of considerable potential but needed to have his confidence restored after running for a long time in the best of company, His aim was to find a couple of opportunities for him in smaller races with small fields simply to build his self-belief with a victory or two and then bring him back to the big time. At Ascot on Saturday, lo and behold, there was the opportunity. The United House Handicap Steeplechase had cut up. There were only four runners and the bookies were making Nathen Lad the outsider of the four at 5-1.

Knowing that Mark never sends his hors- es to the racecourse unless they are fit to run and recalling that Nathen Lad has tended to run his best races when fresh, I burdened him with a slice of Mrs Oakley's housekeeping and watched with the great- est pleasure as Timmy Murphy had him bounding along in front, really enjoying his racing, and coming away in the straight to record a comfortable win. After the race Mark said, 'That was magic. It's given me as much pleasure as any winner I've trained. I knew this horse (as his mother's then assistant trainer) back in his Sun Alliance days and I thought then he might be a Gold Cup horse. But he's not had life easy since.'

At the start of the year, he said, Nathen Lad seemed depressed. So they let him win a number of home gallops, just by a head or a neck. 'You could see him starting to think, "I'm enjoying this." Training horses isn't just about getting them fit. They've got to want to do it too.' Time will tell if he has his mother's patience but the steady stream of winners from Weathercock House already this season is testament to a real talent on the move.

When I was talking after Nathen Lad's race to the National Hunt handicapper Phil Smith, he told me that the average chaser runs only four times a season. Given the injury risks of jumping obstacles at speed and the problems caused by the weather for the winter game, I suppose that is not so surprising. But it does raise a question mark over those trainers who send their charges to the racecourse in the full knowl- edge that they are not fit enough to win. With only four cracks a year at it you can't really afford to waste one. One trainer who is really motoring this season is the ever-courteous Philip Hobbs, one of racing's real gentlemen. With Mar- tin Pipe and Paul Nicholls operating from his part of the world in the full media spot- light the Minehead trainer does not always get the credit he deserves. On Saturday a Press Room colleague taxed him early on with the fact that somebody had been back- ing him to train a hundred winners this sea- son, 'Not me,' said the ever-courteous Hobbs. 'It must have been some of my owners.' He then took both the novices hurdle with Nuvellino and the novices chase with Life's Work, to tAe his score for the season to 26. At 3-1 those who took it seem to have got a decent bet. But the most spectacular victory of the afternoon at Ascot was the win for Get Real in the two-mile chase. Nicky Hender- son's huge horse makes the rest of the field look like ponies and he has only one gear: full tilt. In the softish ground he was tiring at the last, but he had already run the legs off the rest of the field including horses as good as Celibate and Space Trucker. I will continue backing him over two miles (and not a yard further) and around right hand- ed tracks. Nicky says there is no question of the horse ever going to Cheltenham or Aintree. He simply cannot act on left-hand- ed tracks and he cannot be restrained. As his grinning trainer put it: 'You can't do anything else with him. The brakes don't work.'

I hope, incidentally, that The Spectator reader I encountered in the rain, while looking for the best price to be had about John Akehurst's Romero before the sixth, did take me up on my suggestion. I seem to be on a bit of a run and Romero came right away from his field to give the Epsom handler his first Ascot winner. I had liked the look of the Robellino gelding and John told us afterwards that they had fancied him on the flat at Redcar not long ago and been disappointed. 'But he really does jump.'

Connections gave 20,000 guineas for him, with the encouragement of John's father, that wily old fox Reg Akehurst. John would like to have more than the eight jumpers he has, despite the injury worries that come with jumping horses. 'It's just so exciting schooling young horses and finding one which jumps and wondering "Just what have I got here?" They can dou- ble their flat form sometimes.'

With any luck Romero will more than pay back what they laid out for him and he'll get further than the two miles he was running over at Ascot.