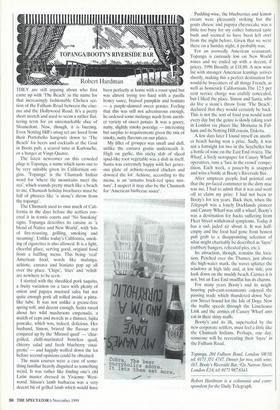 THEY are still arguing about who first came up with 'The Beach' as the name for that increasingly fashionable Chelsea sec- tion of the Fulham Road between the cine- ma and the Hollywood Road. It's a pretty short stretch and used to seem a rather flat- tering term for an unremarkable slice of Sloancdom. Now, though, it is buzzing. Even Notting Hill's smug set are lured from their Portobello hangouts down to 'The Beach' for beers and cocktails at the Goat in Boots pub, a scared tuna at Kartouche, or a burger at Vingt-Quatre.

The latest newcomer on this crowded plage is Topanga, a name which turns out to be very suitable given its Californian ori- gins. `Topanga' is the Chumash Indian word for 'where the mountains meet the sea', which sounds pretty much like a beach to me. Chumash holiday brochures must he full of phrases like 'a stone's throw from the topanga'.

The Chumash used to own much of Cali- fornia in the days before the settlers cov- ered it in tennis courts and `No Smoking' signs. Topanga describes its cuisine as 'a blend of Native and New World', with 'lots of fire-roasting, grilling, smoking and steaming'. Unlike today's California, smok- ing of cigarettes is also allowed. It is a light, cheerful place, serving good, original food from a baffling menu. This being 'real' American food, words like malanga, achiotc, cassava and boniato pop up all over the place. 'Chips', 'fries' and 'relish' are nowhere to be seen.

I started with the shredded pork taquito, a fruity variation on a taco with plenty of onion and papaya mustard salsa but not quite enough pork all rolled inside a pitta- like tube. It was not unlike a grease-free spring roll, and decent enough. Santa raved about her wild mushroom empanada, a mulch of ceps and morels in a thinner, fajita pancake, which was, indeed, delicious. Her husband, Simon, braved the flavour riot conjured up by the 'Mirasol quail' — 'char- grilled, chilli-marinated boneless quail, chicory salad and fresh blueberry vinai- grette' — and happily wolfed down the lot before second opinions could be obtained.

The main courses were a case of some- thing familiar heavily disguised as something weird. It was rather like finding one's old Latin master dressed in Vivienne West- wood. Simon's lamb barbacoa was a very decent bit of grilled lamb which would have been perfectly at home with a roast spud but was almost trying too hard with a pasilla honey sauce, braised pumpkin and boniato — a purple-skinned sweet potato. Feeling that this was still not adventurous enough, he ordered some malanga mash from anoth- er variety of sweet potato. It was a gooey, nutty, slightly smoky porridge — interesting but surplus to requirements given the mix of smoky, nutty flavours on our plates.

My fillet of grouper was small and dull, unlike the cassava gratin underneath it. High on garlic, this sticky slab of sliced spud-like root vegetable was a dish in itself. Santa was extremely happy with her gener- ous plate of achiote-roasted chicken and downed the lot. Achiote, according to the menu, is an 'annatto brick-red spice mix- ture'. I suspect it may also be the Chumash for 'American barbecue sauce'.

Cobra. The beer curryholics adore. It lets them eat more.

Pudding-wise, the blueberries and lemon cream were pleasantly striking but the goats cheese and papaya cheesecake was a little too busy for my rather battered taste buds and seemed to have been left over from the night before. Given that we were there on a Sunday night, it probably was.

For an avowedly American restaurant, Topanga is curiously low on New World wines and we ended up with a decent, if pricey, 1996 Brouilly at £18.80. A new wine list with stronger American leanings arrives shortly, making this a perfect destination for would-be boycotters of all things French, as well as homesick Californians.The 12.5 per cent service charge was craftily concealed,

but I liked the place. Simon and Santa, who

do live a stone's throw from The Beach', declared that they would certainly be back.

This is not the sort of food you would want every day but the genre is slowly taking root in London via places like Montana in Ful- ham and its Notting Hill cousin, Dakota.

A few days later I found myself on anoth- er beach having won a prize. Sadly, it was not a fortnight for two in the Seychelles but a bottle of wine on the East End riviera. The What'', a lively newspaper for Canary Wharf operatives, runs a 'face in the crowd' compe- tition. Each week, a passer-by is snapped and wins a bottle at Booty's Riverside Bar.

After umpteen people had pointed out that the po-faced commuter in the dirty mac was me, I had to admit that it was and went off to claim my prize. I had not been to Booty's for ten years. Back then, when the Telegraph was a lonely Docklands pioneer and Canary Wharf was still a wharf, Booty's was a destination for hacks suffering from Fleet Street withdrawal symptoms. Today it has a sad, jaded air about it. It was half- empty and the food had gone from honest pub grub to a disappointing selection of what might charitably be described as 'fayre' (rubbery bangers, reheated pies, etc.).

Its attraction, though, remains the loca- tion. Perched over the Thames, just above the high-water mark, the waves splatter the windows at high tide and, at low tide, you look down on the muddy beach. Cannes it is not, but an East End mudflat has its charms.

For many years Booty's and its neigh- bouring pub-cum-restaurants enjoyed the passing trade which thundered down Nar- row Street bound for the Isle of Dogs. Now the traffic speeds through the Limehouse Link and the armies of Canary Wharf ants eat in their shiny malls.

Booty's and its ilk, superseded by the new corporate settlers, must feel a little like the Chumash Indians. Perhaps, one day, someone will be recreating their layre' in the Fulham Road.

Robert Hardman is a columnist and core- spondent for the Daily Telegraph.