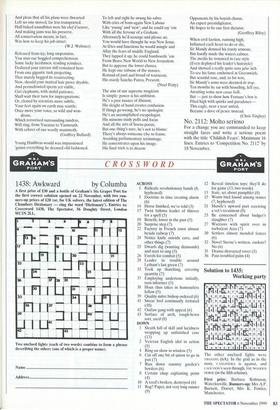 A first prize of £30 and a bottle of Graham's Six Grapes Port for the first correct solution opened on 22 November, with two run- ners-up prizes of £20 (or, for UK solvers, the latest edition of The Chambers Dictionary — ring the word 'Dictionary'). Entries to: Crossword 1438, The Spectator, 56 Doughty Street, London WC1N 2LL.

Two unclued I ghts (each of two words) combine to form a phrase describing the others (one of which is a proper name).

The other unclued lights were 'TROJANS (6A). In the grid as 'n the story, CASSANDRA is against and LAOCOON'S seen through, 'ME WOODEN I TORSI: (in the fifth column).