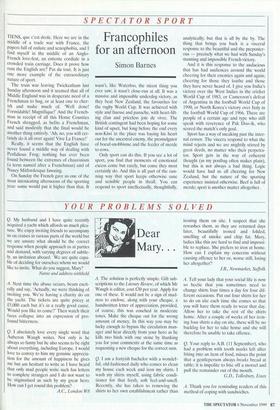 Francophiles for an afternoon

T1ENS, que c'est drole. Here we are in the middle of a trade war with France, the papers full of ordure and xenophobia, and I find myself in the middle of an Anglo- French love-fest, an entente cordiale in a crowded train carriage. Does it prove how rum the English are? Pas du tout. It is just one more example of the extraordinary nature of sport.

The train was leaving Twickenham last Sunday afternoon and it seemed that all of Middle England was in desperate need of a Frenchman to hug, or at least one to cher- ish and make much of. 'Well done! Formidable! Magnifique!' And the French- man in receipt of all this Home Counties French shrugged, as befits a Frenchman, and said modestly that the final would be another thing entirely. `Ah, no, you will cer- tainly do it all over again! Vive La France!' Really, it seems that the English have never found a middle way of dealing with Perfidious Frog; nothing has ever been found between the extremes of chauvinism (a term named after a Frenchman) and or Nancy Mitfordesque fawning.

On Sunday the French gave us one of the most intoxicating afternoons of the sporting year: some would put it higher than that. It wasn't, like Waterloo, the nicest thing you ever saw; it wasn't close-run at all. It was a massive and impossible underdog victory, as they beat New Zealand, the favourites for the rugby World Cup. It was achieved with style and finesse and panache, with heart-lift- ing élan and priceless joie de vivre. The British contingent had been hoping for some kind of upset, but long before the end every non-Kiwi in the place was baying his heart out for the ancestral enemy, the promulgator of boeuf-snobbisme and the feeder of merde to cows.

Only sport can do this. If you see a lot of sport, you find that moments of emotional excess come but rarely, but come they most certainly do. And this is all part of the cun- ning way that sport keeps otherwise sane and sensible people in thrall. You can respond to sport intellectually, thoughtfully, analytically; but that is all by the by. The thing that brings you back is a visceral response to the beautiful and the preposter- ous — precisely what we had with Sunday's stunning and impossible French victory.

And it is this response to the audacious that has had audiences around the world cheering for their enemies again and again; cheering for those they loathe and those they have never heard of. I give you India's victory over the West Indies in the cricket World Cup of 1983, or Cameroon's defeat of Argentina in the football World Cup of 1990, or North Korea's victory over Italy in the football World Cup of 1966. There are people of a certain age and type who still speak with reverence of Pak Doo-ik, who scored the match's only goal.

Sport has a way of sneaking past the inter- nal censor. The viscera respond to what the mind rejects and we are mightily stirred by great deeds, no matter who their perpetra- tor. Sport gets in the way of coherent thought (as my postbag often makes plain), but this is not always a bad thing. Logic would have had us all cheering for New Zealand, but the nature of the sporting experience insisted otherwise. Beef is full of merde; sport is another matter altogether.