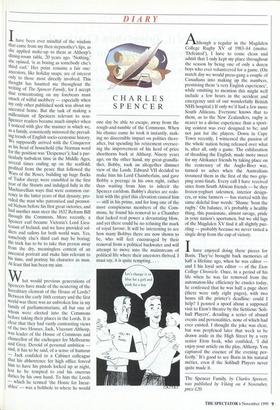 CHARLES SPENCER Ihave been ever mindful of the wisdom that came from my then stepmother's lips, as she applied make-up to them at Althorp's dining-room table, 20 years ago. 'Nothing,' she opined, 'is as boring as somebody else's third earl.' Her point remains a fair one: ancestors, like holiday snaps, are of interest only to those most directly involved. This thought has haunted me throughout the writing of The Spencer Family, for I accept that concentrating on my forebears must smack of wilful snobbery — especially when in only other published work was about my ancestral home. But the task of making a millennium of Spencers relevant to non- Spencer readers became much simpler when I noticed with glee the manner in which we, as a family, consistently mirrored the prevail- ing trends of English socio-economic history. We supposedly arrived with the Conqueror as his head of household (the Norman word for the position was Despenser'); had a par- ticularly turbulent time in the Middle Ages, several times ending up on the scaffold; profited from the peace that followed the Wars of the Roses, building up huge flocks of Tudor sheep; were ennobled in the first year of the Stuarts and indulged fully in the Machiavellian ways that were common cur- rency in the latter years of that dynasty; pro- vided the man who patronised and promot- ed Nelson before his first great victories, and had another man steer the 1832 Reform Bill through the Commons. More recently, a Spencer earl became Victoria's Lord Lieu- tenant of Ireland, and we have provided sol- diers and sailors for both world wars. Yes, somebody else's third earl may be boring; the trick has to be to take that person away from the dry, meaningless context of an ancestral portrait and make him relevant to his time, and portray his character as man. At least that has been my aim.

What would previous generations of Spencers have made of the neutering of the hereditary element of the House of Lords? Between the early 16th century and the first world war there was an unbroken line in my family of parliamentarians, all but one of Whom were elected into the Commons before taking their places in the Lords. It is clear that they had vastly contrasting views of the two Houses. Jack, Viscount Althorp, was leader of the House of Commons and chancellor of the exchequer for Melbourne and Grey. Devoid of personal ambition and, it has to be said, of a sense of humour — Jack confided to a Cabinet colleague that his abhorrence for high office forced him to have his pistols locked up at night, lest he be tempted to end his onerous duties by his own hand. To him the Lords — which he termed 'the Home for Incur- ables' — was a bolthole to where he would

one day be able to escape, away from the rough-and-tumble of the Commons. When his chance came he took it instantly, mak- ing no discernible impact on politics there- after, but spending his retirement oversee- ing the improvement of his herd of prize shorthorns back at Althorp. Ninety years ago, on the other hand, my great-grandfa- ther, Bobby, took an altogether dimmer view of the Lords. Edward VII decided to make him his Lord Chamberlain, and gave Bobby a peerage in his own right, rather than waiting from him to inherit the Spencer earldom. Bobby's diaries are redo- lent with the grief this elevation caused him — still in his prime, and for long one of the most conspicuous members of the Com- mons, he found his removal to a Chamber that lacked real power a devastating blow, and yet there could be no refusing the mark of royal favour. It will be interesting to see how many Bobbys there are now shown to be, who will feel encouraged by their removal from a political backwater and will attempt to move into the mainstream of political life where their ancestors thrived. I must say, it is quite tempting. .

Ahough a regular in the Magdalen College Rugby XV of 1983-84 (motto: 'Defeated'), I have to come clean and admit that I only kept my place throughout the season by being one of only a dozen boys who ever volunteered for a game. (On match day we would press-gang a couple of Canadians into making up the numbers, promising them 'a very English experience', while omitting to mention this might well include a few hours in the accident and emergency unit of our wonderfully British NHS hospital.) If only we'd had a few more South Africans. Everyone knows that to them, as to the New Zealanders, rugby is nearer to a divine experience than a sport- ing contest was ever designed to be; and not just for the players. Down in Cape Town recently, I witnessed the passion of the whole nation being released over what is, after all, only a game. The exhilaration of thrashing the English, made more sweet for my Afrikaner friends by taking place on the centenary of the Anglo-Boer war, turned to ashes when the Australians trounced them in the first of the two grip- ping semi-finals. Every call I have received since from South African friends — be they frozen-yoghurt salesmen, interior design- ers, or wine farmers — has started with the same doleful four words: 'Shame 'bout the rugby.' On balance, it's probably a healthy thing, this passionate, almost savage, pride in your nation's sportsmen, but we old lags of the Magdalen XV find it all slightly puz- zling — probably because we never tasted a single drop from the cup of victory.

Ihave enjoyed doing these pieces for Boris. They've brought back memories of

half a lifetime ago, when he was editor and I his loyal arts editor — of the Eton College Chronicle. Once, in a period of his life when he was far removed from the automaton-like efficiency he exudes today, he confessed that he was half a page short (there were only eight pages), with two hours till the printer's deadline: could I help? I penned a spoof about a supposed visit to Eton's theatre by the fictitious 'Soli- hull Players', detailing a series of absurd events and personalities, none of which had ever existed. I thought the joke was clear, but was perplexed later that week to be drawn aside in the High Street by a very senior Eton beak, who confided, 'I did enjoy your article on the play, Althorp. You captured the essence of the evening per- fectly.' It's good to see Boris in his natural metier, even if the Solihull Players never quite made it.

The Spencer Family, by Charles Spencer, was published by Viking on 4 November, price £20.