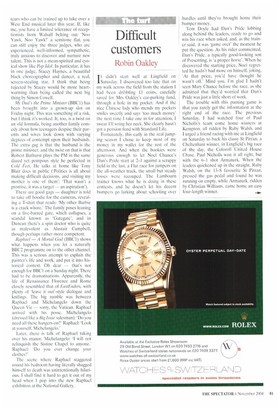 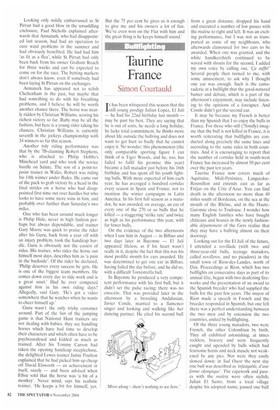 TL didn't start well at Lingfield on 'Saturday. I discovered too late that on my walk across the field from the station I had been dribbling 1.1 coins, carefully saved for Mrs Oakley's car-parking fund, through a hole in my pocket. And if the nice Chinese lady who mends my pockets smiles sweetly and says 'too much money' the next time I take one in for attention, I

swear wring her neck. She clearly hasn't got a pension fund with Standard Life.

Fortunately, this early in the real jumping season I chose to keep most of my money in my wallet for the rest of the afternoon. And when the bookies were generous enough to let Noel Chance's Dan's Pride start at 2-1 against a scrappy field in the last, a Flat race for jumpers on the all-weather track, the small but steady losses were recouped. The Lambourn trainer knows what he is doing in these contests, and he doesn't let his decent bumpers go larking about schooling over hurdles until they've brought home their bumper money, Tom Doyle had Dan's Pride lobbing along behind the leaders, ready to go and win his race when asked, and, as the trainer said, it was 'game over' the moment he put the question. As his rider commented, Dan's Pride, a typically good-looking son of Presenting, is 'a proper horse'. When he discovered the starting price, Noel regretted he hadn't had more on himself, joking, 'At that price, you'd have thought he wasn't off.' Mind you, I'm glad I hadn't seen Mary Chance before the race, as she admitted that they'd worried that Dan's Pride was just a little short of work.

The trouble with this punting game is that you rarely get the information at the right end of the race. The previous Saturday, I had watched four of Paul Nicholls's team come home winners at Kempton, all ridden by Ruby Walsh, and I urged a friend racing with me at Lingfield on Saturday to back his classy Si Pirran, a Cheltenham winner, in Lingfield's big race of the day, the Coloroll United House Chase. Paul Nicholls won it all right, but with the 6-1 shot Armaturk. When the leaders quickened up in the straight, Ruby Walsh, on the 13-8 favourite St Pirran, pressed the gas pedal and found he was running on empty, while Armaturk, ridden by Christian Williams, came home an easy four-length winner. Looking only mildly embarrassed as St Pirran had a good blow in the unsaddling enclosure, Paul Nicholls explained afterwards that Armaturk, who had disappointed last season, had had an operation to cure wind problems in the summer and had obviously benefited. He had had him as fit as a flea', while St Pirran had only been back from his owner Graham Roach for three weeks and can be expected to come on for the race. The betting markets don't always know, even if somebody had been laying St Pirran on the exchanges.

Armaturk has appeared not to relish Cheltenham in the past, but maybe that had something to do with his breathing problems, and I believe he will be worth another chance there. The horse was neatly ridden by Christian Williams, scoring his richest victory so far. Ruby may be all the fashion, but here is a young rider taking his chances. Christian Williams is currently seventh in the jockeys championship with 34 winners so far this season.

Another tidy riding performance was that by the 71b-claiming Robert Stephens, who is attached to Philip Hobbs's Minehead yard and who took the novice hurdle on Salute. The son of a point-topoint trainer in Wales, Robert was riding his 14th winner under Rules. He came out of the pack to grab victory by a head in the final strides on a horse who had disappointed first time out over hurdles but who looks to have some more wins in him, and probably over further than Saturday's two miles.

One who has been around much longer is Philip Hide, never in high fashion perhaps but always dependable, and trainer Gary Moore was quick to praise the rider after his Guru, back from a year off with an injury problem, took the handicap hurdle. Guru is obviously not the easiest of rides. His trainer, who rides the horse out himself most days, describes him as 'a pain in the backside'. Of the rider he declared, 'Philip deserves every success he gets. He is one of the biggest team members. He comes down every day to ride work and is a great asset.' Had he ever competed against him in his own riding days? Allegedly, said Gary. 'He's got a video somewhere that he watches when he wants to cheer himself up.'

Guru wasn't the only tricky customer around. Part of the fun of the jumping game is that National Hunt trainers are not dealing with babies, they are handling horses which have had time to develop their characters and which often have to be psychoanalysed and kidded as much as trained. After his Tommy Carson had taken the opening handicap steeplechase, the delighted Lewes trainer Jamie Poulton explained that he had picked him up cheap off David Elsworth — an achievement in itself, surely — and been advised when Ellsie sold that the horse was 'a bit of a monkey'. Never mind, says his realistic trainer. 'He keeps a bit for himself, yes. But the 75 per cent he gives us is enough to give me and his owners a lot of fun. We've even won on the Flat with him and the great thing is he keeps himself sound.'