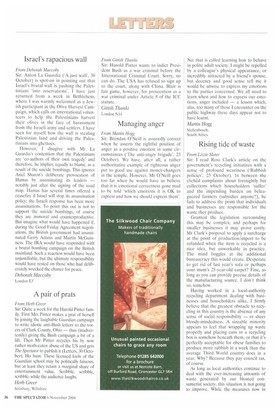 A pair of prats

From Herb Greer Sir: Quite a week for the Harold Pinter family. First Mrs Pinter makes a prat of herself by joining the laughable Guardian campaign to write idiotic anti-Bush letters to the voters of Clark County, Ohio — thus (inadvertently) giving the Bush campaign a bit of a lift. Then Mr Pinter recycles his by now rather moth-eaten abuse of the US and gets The Spectator to publish it (Letters, 30 October). Ho hum. These licensed fools of the Guardian school may be politically fatuous, but at least they retain a marginal share of entertainment value. Scribble, scribble, scribble, while the audience laughs.

From Girish Thanki Sir: Harold Pinter wants to indict President Bush as a war criminal before the International Criminal Court. Sorry, no can do. The USA has refused to sign up to the court, along with China. Blair is fair game, however, for prosecution as a war criminal under Article 8 of the ICC statute.