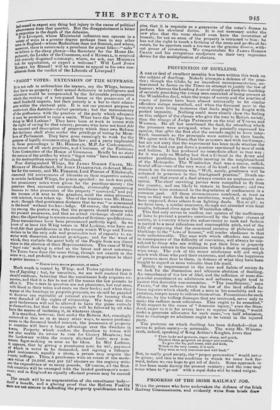 A GREAT deal of excellent morality has been written this week on the subject of' duelling. Nobody attempts a defence of' the prac- tice; though the Globe, by an impudent misrepresentation, en- deavoured to fasten on the Times an attempt to justify the law of honour; whereas the Leading Journal simply set forth the hardship of severely punishing the young men convicted of being present at the Wimbledon duel, when the usage of society and the practice of courts of justice have been almost universally to let similar offenders escape unscathed, and when the foremost men in the country were living instances that duels might be fought with perfect impunity. Nothing could more clearly show the feeling on this subject of the classes who give the tone to British society, than the charge of Judge ParrEsose on the trial of Ynuorc and W mime. He all but sanctioned the duel, for attending which the prisoners were arraigned, when he pointedly expressed his opinion, that after the first shot the seconds ought to have inter- fered, inasmuch as the principals were entirely in their hands. We agree with the Times, that the prisoners met with hard usage; but are not sorry that the experiment has been made whether the

law of the land can put down a practice sanctioned by men of rank and fashion. It has produced no immediate effect in that way ; for it was only on Monday last that a Colonel in the Army and another gentleman had a hostile meeting in the neighbourhood of the Metropolis. The Wimbledon duel was a coarse, raffish, brutal affair—one of the very worst of its kind ; and the common

remark on its occurrence was, " Well, surely, gentlemen will be ashamed to persevere in this blackguard practice." Death en-

sued ; and that event of a duel always creates an unpleasant sen- sation. The chief surviving parties were compelled to fly from the country, and are likely to remain in banishment ; and two auxiliaries were sentenced to the degradation of confinement in a common gaol. All these circumstances combined, at least as lung as they were fresh in the recollection, would, it might have been supposed, deter others from fighting duels. Not at all : as we have seen, a similar rencontre, though not attended with fatal results, followed close upon the Wimbledon affair.

This fact only serves to confirm our opinion of the inefficiency of laws to prevent a practice sanctioned by the higher classes of society, in a country where the subserviency to rank and fashion is carried to a most ridiculous and contemptible pitch, and of the folly of supposing that the occasional recourse of plebeians and blacklegs to the " laws of honour," will render obedience to that code unfashionable. The ease with which offenders can escape in consequence of the difficulty of conviction, will always be con- sidered by those who are willing to put their lives in jeopardy rather titan submit to the imputation which a duel is supposed to wipe away. The risk of the minor misfortune will not weigh much with those who peril their existence, and often the happiness of persons most dear to them, in defence of' what they have been taught to regard as more valuable than life itself.

Mainly to improvement in the tone and habits of society do we look for the diminution and ultimate abolition of duelling. Au amendment of the law of libel, and the infliction of some dis- graceful punishment on adulterers and seducers, might tend to hasten this desirable consummation. " The insufficiency," says PALES., " of the redress which the law of the land affords for those injuries which chiefly affect a man in his sensibility and re- putation, tempts ninny to redress themselves. Prosecutions for such offences, by the trilling damages that are recovered, serve only to make the sufferer more ridiculous. This ought to be remedied." With respect to the cases of "domestic injury," even the Stan- dard, eager as it is for severe laws to repress duelling, " would make a generous allowance for such cases,"—a half admission, that to challenge an adulterer ought to be venial in the injured par t

The pretence on which duelling has been defended—that it serves to polish society—is untenable. The witty Mr. Whistle- craft, indeed, speaking of King Arthur's Knights, avers that

" Their looks and gesturer, eager, sharp, and quick, Showed then' prepared, on proper provocation,

'1'0 give the lie, pull noses, stab and kick, Which is the very reason, it is said, They were so very courteous and well-bred."

But, in really good society, the " proper provocation" would never be given; and this is the condition to which we must look for- ward, before we can hope to get rid of duels. Some approach to it has been made during the present century ; and the time may conic when to " go out" with a royal duke will be voted vulgar.