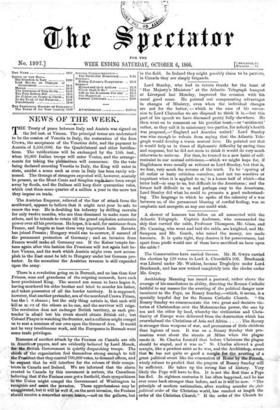 THE Treaty of peace between Italy and Austria was signed on the 3rd inst. at Vienna. The principal terms are understood to be the cession of Venetia to Italy, the restoration of the Iron Crown, the acceptance of the Venetian debt, and the payment to Austria of 3,500,0001. for the Quadrilateral and other fortifica- tions. The ratifications will be exchanged by the 15th inst., when 10,000 Italian troops will enter Venice, and the arrange- ments for taking the plebiscitum will commence. On the vote being declared annexing Venetia to Italy, the King will enter in state, amidst a scene such as even in Italy has been rarely wit- nessed. The throngs of strangers expected will, however, scarcely be present, as the Mont Cenis and Simplon roals.have been swept away by floods, and the Italians still keep their quarantine rules, which cost them some quarter of a million a year in the mere tax they impose on trade.