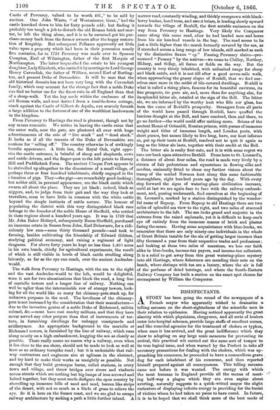 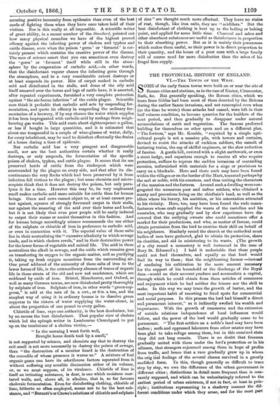 ASTORY has been going the round of the newspapers of it French mayor who apparently wished to dramatize a telling sarcasm on the short-sightedness of the scientific men in their relation to epidemics. Having noticed apparently the great alacrity with which physicians, clergymen, and all sorts of healers enter into hospital schemes, provide large staffs of excellent nurses, and like remedial agencies for the treatment of cholera or typhus, when once it has arrived, and the great indifference which they show to adopting on any large scale measures for preventing its arrival, this practical wit carried out the same sort of temper to its true logical issue, and when warned by the Prefect to take all necessary precautions for dealing with the cholera, which was ap- proaching his commune, he proceeded to have a commodious grave dug for each inhabitant of his commune, and then reported himself prepared against all consequences. This telling sarcasm came not before it was wanted. The energy with which the most humane in England provide all the means of meet- ing half-way a plague which they are even supine about averting, naturally suggests to a quick-witted mayor the slight caricature of displaying infinite energy in providing for the burial of victims whom he had taken no pains to have cured. In future, it is to be hoped that we shall think more of the best mode of

securing positive immunity from epidemics than even of the best mode of fighting them when they have once taken hold of their victims. Nor is this really at all impossible. A scientific writer of great ability, in a recent number of the Standard, pointed out how many physical remedies we have of the highest proved efficacy against the infecting power of cholera and typhus and cattle disease, even when the poison germ' or ' ferment' is cer- tainly present which contains the creative power of the disease. The men of science assert that you can sometimes even destroy the germ' or ferment' itself while still in the atmo- sphere by the evaporation of carbolic acid,—in other words, that the disinfectant vapour chases the infecting germ through the atmosphere, and to a very considerable extent destroys or at least suspends its power. Bits of carpet soaked in carbolic acid and distributed in the stalls, and doses of the oily acid itself smeared over the horns and legs of cattle have, it is asserted, after repeated experiments, furnished a very complete protection against " the air-borne infection" of the cattle plague. Scientific men think it probable that carbolic acid acts by suspending fer- mentation, and quote its efficacy in suspending the ordinary fer- mentation of a brewery, if by any chance the water which supplies it has been impregnated with carbolic acid by soakage from neigh- bouring gas works. This acid costs about eighteenpence a gallon, or less if bought in large quantities, and it is estimated that about one teaspoonful in a couple of wine-glasses of water, daily, for every inhabitant, may be used to disinfect effectually the drains of a house during a time of epidemic.

But carbolic acid has a very pungent and disagreeable smell, nor are the best authorities certain whether it really destroys, or only suspends, the fermentation of the specific poison of cholera, typhus, and cattle plague. It seems that its use preserved herds of cattle from the rinderpest which were suurrounded by the plague on every side, and that after its dis- continuance the very flocks which had been preserved by it from infection fell victims to the plague ; but some chemists and micro- scopists think that it does not destroy the poison, but only para- lyzes it for a time. However this may be, its very unpleasant smell makes carbolic acid more suitable for cattle than for human beings. Oxen and cows cannot object to, or at least cannot pro- test against, squares of strongly flavoured carpet in their stalls, nor against the smearing of the acid over their horns and hoofs, but it is not likely that even poor people will be easily induced to carpet their rooms or anoint themselves in this fashion. And for human beings accordingly science recommends the use either of the sulphate or chloride of iron in preference to carbolic acid, or even iu connection with it. The especial value of these salts lies in their neutralizing the " excessive alkalinity to which sewage tends, and in which cholera revels," and in their destructive power for the lower forms of vegetable and animal life. The acid in them neutralizes the alkali in sewage, and the oxide which remains goes on transferring its oxygen to the organic matter, and so purifying it, taking up fresh oxygen meantime from the surrounding air. One proof adduced of the animosity of these salts of iron to the lower forms of life, is the extraordinary absence of traces of organic life in those strata of the old and new red sandstones, which are reddened by oxide of iron. Bristol, Manchester, and Oxford, as well as many German towns, are now disinfected pretty thoroughly by sulphate of iron. Sulphate of iron, in other words "green cop- peras," is sold at the rate of 3s. a cwt., or 60s. a ton, and the simplest way of using it in ordinary houses is to dissolve green copperas in the cistern of water supplying the water-closet, in about the proportion of one pound to every gallon.

Chloride of lime, says one authority, is the best deodorizer, but by no means the best disinfectant. That popular view of cholera which led the epitaph writer in Lambourne Churchyard to put up on the tombstone of a cholera victim,- " In the morning I went forth well, Brought home death took by,.a smell,"

is not supported by science, and chemists say that to destroy the evil smell is not more necessarily to destroy the poison of sewage, than " the destruction of a monitor lizard is the destruction of the crocodile of whose presence it warns us." A mixture of foul organic gases can have its odoriferous factors separated from it without suffering any sensible diminution either of its volume, or, as we must suppose, of its virulence. Chloride of lime is itself an irritating substance, is dear, is one which moistens mor- tared walls, and, above all, is alkaline, that is, so far favours choleraic fermentation. Even for disinfecting clothing, chloride of lime, hitherto so often employed, seems not to be the best sub- stance, and 6 6 Burnett's or Crewe's solutions of chloride and sulphate

of zinc " are thought much more effectual. They leave no stains of rust, though, like iron salts, they are " acidifiers." But the best disinfectant of clothing is heat up to the boiling or baking point, and applied for some little time. Charcoal and ashes and other absorbent substances are useful as disinfectants in proportion to their absorbing power. But as it is mainly their porousness which makes them useful, so their power is in direct proportion to their quantity, and the house of a poor man with a large family will of course need far more disinfection than the ashes of his frugal fires supply.