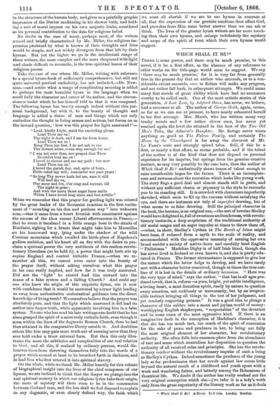 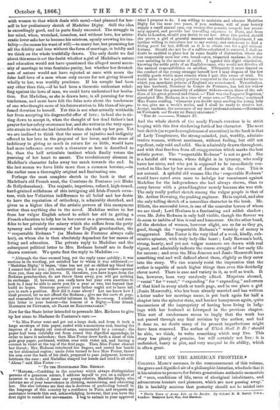 WHICH SHALL IT BE?*

Perhaps the most complete sketch in the book is that of IVIadeline's old French aunt, the Comtesse de Fontarce (née Blake de Ballyshanahan). The majestic, imperious, refined, high-toned, hard-grained selfishness of this intriguing old Irish-French coun- tess, with her Voltairian indifference to all belief and her desire to have the reputation of orthodoxy, is admirably sketched, and gives us a higher idea of the artistic powers of this anonymous writer than anything else in the novel. Madeline writes to her from her vulgar English school to solicit her aid in getting a French education to help her in her career as a governess, and con- fides to her privately the misery which she suffers from the petty tyranny and miserly economy of her English grandmother, the 4' respectable Redman " (as Madame de Fontarce always calls her), on whom she is then absolutely dependent for her means of living and education. The private reply to Madeline and the subsequent political letter to Mrs. Redman herself are in finely .drawn contrast. We quote first the reply to Madeline :— "Although the time seemed long, yet the reply came quickly; it was -curious in its wording, yet satisfied her to whom it was addressed :— Madeline Digby,' it began, time has not yet so chilled my blood that I cannot feel for you ; yet, understand me, I am a poor widow—poorer than you, than any one knows. If, therefore, you have hopes from the Redman grandmother, do not throw them away, you will get nothing - in exchange. If however, you really have but your own exertions to look to, I may be able to serve you for a year or two, but beyond that build no hopes. Gracious powers! your father ought not to have left you in such a position. How did it come about ? Let me know how I -shall proceed, let us not offend the Redman ; give me the carte de pays, and remember the most powerful talisman in life is—money. I confide this letter to your honour—the honour of a Digby.—Your friend, MADELINE DE FONTARCE, née BLARE DE BALLYSHANAHAN "

Now for the State letter intended to persuade Mrs. Redman to give sip her niece to Madame de Fontarce's care :-

" So Miss Foster went and got out a large desk, and from it took a large envelope of thin paper, sealed with a monstrous seal, bearing the impress of a deeply cut coat-of-arms, surmounted by a coronet ; the paper had been carefully cut from round this dignified appendage, in order to leave it unbroken; then Miss Foster drew forth a sheet of thin pale grey paper, perfumed, written over with violet ink, and having a eoronet in violet at the top of the first page. Then Miss Foster cleared her throat ; Mrs. Redman interlaced her fingers, and rested her hands on her abdominal region ; uncle John turned to face Miss Foster, threw his arm over the back of his chair, prepared to pass judgment, however intricate the case ; and Madeline clasped her hands and tried to sit still. 4 Ahem !' said Miss Foster :- "' To THE HONOURABLE MRS. REDMAN.

0,4 " MADAM:St—Confiding in the courtesy which always distingaishes persons of a generous nature, I address myself to you on a subject of interest to us both—I mean our young relative, Madeline Digby, who informs. me of your benevolence in clothing, maintaining, and educating her. She also informs me that she is desirous of perfecting herself in the language of this country by a residence in Paris, and requests my assistance towards this end, acknowledging, however, that you have the first right to control her movements. I beg to submit to your approval what I propose to do. I am willing to maintain and educate Madeline Digby for the next two years, if you, madame, will of your bounty supply a small annual sum, say twenty-five pounds, toward; her neces- sary apparel, and provide her travelling expenses to Paris, and from Paris to London, should you desire to see her. After this period, should she prove a girl of graceful manners and creditable deportment, I am further willing to introduce her to my society, and endeavour to find a fitting parti for her, difficult as it is to obtain one for a girl without fortune. Should she not be of a calibre calculated to succeed, I shall no doubt be enabled to place her in some family of distinction, where she can respectably earn her own bread—you, respected madame, in either case assisting in the matter of outfit. I append this slight stipulation, knowing the noble pride of an Englishwoman, who would not devolve all the natural responsibilities on another. Ultimately it must depend on the conduct of the young stranger herself how I may dispose of the few worldly goods which must remain when I quit this scone of trial. No doubt mine is but a paltry portion compared to the colossal fortunes to which you merchant princes of England are accustomed. Nevertheless, my late husband, Monsieur le Comte de Fontarce, has left his widow better off than the generality of soldiers' widows—even those of the sol- diers of his great general and friend,—' That was the Emperor Napoleon,' ejaculated Mrs. Redman, in a tone of some awe.—' Therefore,' continued Miss Foster reading, whenever you decide upon sending the young lady to me, give me a week's notice, and I shall be ready to receive her. Accept, madame, the assurance of my most profound esteem.—MADELisu DE FONTARCE, neer BLARE DE BALLYSHANAHAN."

And the whole sketch of the needy French countess is in strict keeping with this first shadowing forth of her character. The next best sketch (as regards completeness of execution) in the book is that of Lady Templemore, the strong-minded, just, worldly, adminis- trative woman, without sentiment, without feeling, but still not repellent, only cold and solid. She is admirably drawn throughout, and with that freedom from all exaggeration which marks the best artistic power. The "respectable Redman" is not so good. She is a hateful old woman, whose delight is in tyranny, who really hates her niece, and who yet is supposed to be immediately con- verted to like her by her access of fortune at the close. This is not natural. A spiteful old woman like the ' respectable Redman' would have cared even more to indulge her resentment against Madeline for the independence she had always shown, than to curry favour with a granddaughter merely because she was rich. The only really perfect sketch among the vulgar people is that of Mr. Arthur Downing, the pushing engineer. He is capital, and also the only telling sketch of a masculine character in the book. Mr. Elliott, the successful lover, is one of the muscular heroes of whom we are tired ; Lord Hexhani is a fascinating and selfish shadow ; even Mr. John Redman is only half visible, though the flavour we do seem to imbibe of him is real and humorous. On the other hand, all the sketches of women, however slight, are as far as they go, good, though the " respectable Redman's " worship of money is exaggerated. Miss Foster is the very ideal of a weak, kindly, sub- missive spinster, with truly lady-like heart ; Lady Rawson's bold, strong, hearty, and yet not vulgar manners are drawn with real vigour, and admirably indicate the coarse struggle of her early life for success ; and even the Miss Joneses and Jessie Moorcroft have something real and well defined about them, slightly as they enter into the story. We can scarcely resist the impression that the author is capable of much higher things than even this decidedly clever novel. There is ease and variety in it, as well as truth. It has, however, been very carelessly edited. Misprints abound, " venial " for " venal," " expending" for " expanding," and errors of that kind in every ninth or tenth page, and in one place a girl (Jessie Moorcroft), who has been already married and has written a letter under her marriage name, is put back again for half a chapter into the spinster state, and has her honeymoon again, quite unconscious of the impropriety of having been living in lodg- ings with her husband at Liverpool in the previous chapter. This sort of carelessness seems to imply that the work has not passed through any final revision by the author, and had it done so, no doubt many of its present imperfections might have been removed. The author of Which Shall It Be? should be able, we think, to write something which may live. This story has plenty of promise, but will certainly not live : it is unfinished, heavy in plot, and very unequal in its ability, which is often great.