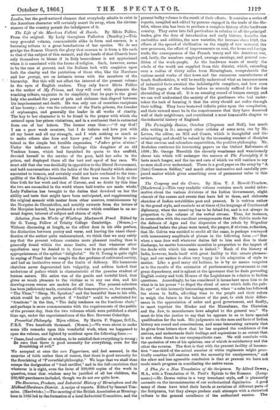 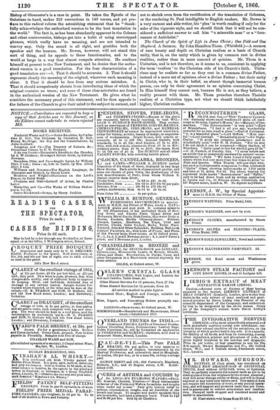 A Plea for a New Translation of the Scriptures. By

Alfred Dewes, M.A., with a Translation of St. Paul's Epistle to the Romans. (Long- mans.)—Mr. Dewes writes in a very trenchant style, anti is pleasantly sarcastic on the inconsistencies of our ecclesiastical dignitaries. A good many of Ahem have tried their hands at revisions of different parts of the Scriptures, but they always preface snoh attempts with a rhetorical tribute to the general excellence of the authorized version. The

Bishop of Gloucester's is a case in point. He takes the Epistle of the Galatians in hand, makes 252 corrections in 149 verses, and yet pre- fixes to this radical reform the astonishing statement that he " thank- fully acknowledges the authorized version to be the best translation in the world." The fact is, as has been abundantly apparent in the Colenso and other• controversies, bishops get into a habit of using stereotyped phrases, which really have no meaning, and are not intended to convey any. Only the sound is all right, and gratifies both the speaker and the hearers. Mr. Dawes, however, will not stand this sort of thing, and he appeals to 'these functionaries, and to the world at large in a way that almost compels attention. He confines himself at present to the New Testament, and he denies that the autho- rized version is a good translation. For the four characteristics of a good translation are ;-1. That it should be accurate. 2. That it should represent clearly the meaning of the original, wherever such meaning is clear. 3. That it should be free from any serious mistakes. 4. That it should scrupulously abstain from introducing ideas of which the original contains no trace; and none of these char acteristics are found in the authorized version of the New Testament. He gives what he considers the necessary proof of this statement, and he then appeals to the fathers of the Church to give their mind to the subject in earnest, and not to shrink even from the rectification of the translation of Gehenna, or the rendering St. Paul intelligible to English readers. Mr. Dewes is - a very earnest and able writer, his plea' is worth reading if only for the • sake of the vigorous style, and we should think that it will not be con- sidered a sufficient answer to call him "a miserable man" or a "fore- runner of Antichrist."