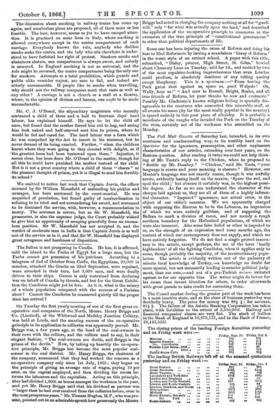 Page 3, 6 October 1866 — Some one has been injuring the cause of Reform and
Close

Some one has been injuring the cause of Reform and

doing his best to libel Reformers by issuing a scandalous litany of Reform' in the worst style of an extinct school. A paper with this title, subscribed, " Dieley, printer, High Street, St. Giles," bawled about Chancery Lane on Tuesday, sold for ld., and recited by two of the most repulsive-looking improvisatores that even London could produce, is absolutely destitute of any telling quality except blasphemy. This is a specimen :—" From having the Park gates shut against us, spare us, good Walpole Oh, Wally, hear us !" " And now to Russell, Bright, Beaks, and all true friends of Reform, let your thanks be now and evermore." Possibly Mr. Gladstone's known religious feeling is specially dis- agreeable to the creatures who concocted this miserable stuff, at all events his name (by far the most really popular in the country) is spared entirely in this poor piece of ribaldry. It is probably a manifesto of the roughs who invaded the Park on the Tuesday of the riots, certainly not of the workmen who assembled on the Monday.