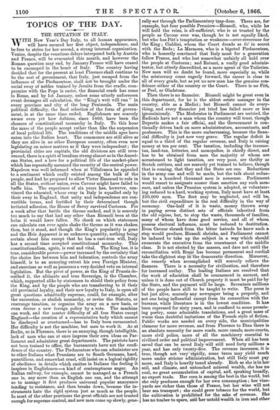 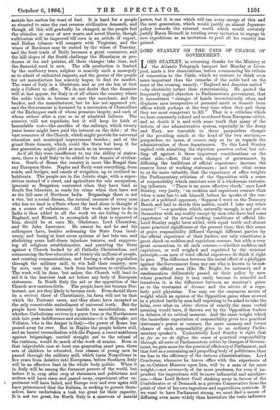 THE SITUATION IN ITALY.

WITH New Year's Day Italy, to all human appearance, will have secured her first object, independence, and be free to strive for her second, a strong internal organization. Venice, despite the vexatious delays interposed both by Austria and France, will be evacuated this month, and however the Roman question may end, by January France will have ceased to be encamped in the heart of Italy. The country having decided that for the present at least Florence shall continue to be the seat of government, that Italy, just escaped from the influence of the Piedmontese, shall not be brought under the social sway of nobles trained by Jesuits from the cradle, com- promise with the Pope is easier, the financial crash has come in Rome, and by 1st January, unless some utterly unforeseen event deranges all calculation, the "King's writ will run " in every province and city of the long Peninsula. The main political difficulty, the final selection of the form of govern- ment, is at the same time ended. Englishmen are scarcely aware even yet how dubious, since 1860, have been the chances of constitutional monarchy in Italy. To this hour the mass of the people accept rather than like the suspension of local political life. The traditions of the middle ages have eaten into the Italian heart. The communes are still alive as they are alive in no other European country, often even now legislating on minor matters as if they were independent ; the provincial cities are capitals, the old divisions are still reve- renced, there is a spirit of localism strong almost as in the Ameri- can States, and a love for a political life of the market-place which has repeatedly menaced the security of the central power. Napoleon was well informed when at Villafranca he appealed to a sentiment which really existed among the bulk of the people, and had he proposed to allow Victor Emanuel to rule in all the States, without union, even Cavour might have failed to baffle him. The experience of six years has, however, con- vinced the educated, whose sway in Italy is equalled only by their sway in England, that unity and independence are con- vertible terms, and fortified by their determined though irritated adhesion, the House of Savoy survived Custozza. For a week after that battle the throne rocked, and it is scarcely too much to say that had any other than Ricasoli been at the helm it would have fallen. No shock on which statesmen can calculate can ever again shake the throne as it was shaken then, but it stood, and though the King's popularity is gone and the Heir Apparent is an unknown quantity, nothing being certain about him except that he has a cast-iron will, Italy has a second time accepted constitutional monarchy. This constitutionalism, again, is real and vital. The King has, it is true, considerable power—power increased by the certainty that the choice lies between him and federation, controls the army himself, is to an annoying extent his own Foreign Minister, and exercises as well as possesses a very decided veto on internal legislation. But the pivot of power, as the King of Prussia de- scribed it, the ultimate and true Sovereign, is the Chamber, which, supported alike by statesmen to shield their policy from the King, and by the people who are transferring to it their old provincial loyalty, and their new loyalty to Italy, is upon all great questions admittedly supreme, could, for example, alter the succession, or abolish monarchy, or revise the Statuto, or rearrange taxation, or organize the army on a new basis, or even decree a new foreign policy by a vote. The machine can work, and the master difficulty of all free States except England—the creation of a representative body which cannot be disobeyed or overturned—has in Italy been surmounted. Her difficulty is not the machine, but men to work it. As at Berlin, so in Florence, there is an annoying, though intelligible, lack of men who can at once impress their own ideas on Par- liament and administer great departments. The patriots have not been trained to office, the bureaucrats have not the confi- dence of the country. The Piedmontese who can administer are to other Italians what Prussians are to South Germans, hard, punctilious, and somewhat cruel, will insist on a logical rigidity of obedience in details which excites in Italians the feeling it inspires in Englishmen—a kind of contemptuous anger. An Italian railway, for example, cannot be managed as a French one is, any more than an English one can, and the attempt so to manage it first produces universal popular annoyance tending to resistance, and then breaks down, because the in- struments hate the rigid system just as much as the people. In most of the other provinces the great officials are not trusted enough for supreme control, and new men come up slowly, gene- rally not through the Parliamentary trap-door. There are, for example, but four possible Premiers—Ricasoli, who, while he will hold the reins, is all-sufficient, who is as trusted by the people as Cavour ever was, though he is not equally liked, but who has Pitt's temptation or weakness—over-reverence for the King ; Cialdini, whom the Court dreads as lie in secret with the Reds ; La Marmora, who is a bigoted Piedmontese, who is honestly convinced that Italy must for a generation follow France, and who lost somewhat unfairly all hold over the people at Custozza • and Ratazzi, a really good adminis- trator, but utterly discredited, as a mere agent of the Tuileries. New men will no doubt, be found, more especially as, while the aristocracy come eagerly forward, the career is clear to all of every grade, but as yet no new man has the genuine coo- fidence either of the country or the Court. There is no Pitt,. or Peel, or Gladstone.

As if all this were insufficient to tax the ability of states- men, there is half Italy to be added to the domain of civiliza- tion. South of Rome the country is more like Bengal than any European State. Naples and Sicily want everything, from roads, and bridges, and canals of irrigation, up to civilized in- habitants. The people are in the Asiatic stage, with a super- stition instead of a creed, and agriculture for sole occupation, ignorant as Bengalees, contented when they have land as South Sea Islanders, as ready for crime when they have not as the hill men of Northern India. Brigandage there is not a vice, but a social disease, the natural recourse of every man who has no land in a State where the land alone is thought of as a means of subsistence. All the work we have to do in India is thus added to all the work we are failing to do in England, and Ricasoli, to accomplish all that is expected of him, should be at once Mr. Gladstone, Lord Clarendon, and Sir John Lawrence. He cannot be, and he and his colleagues have, besides redeeming the State from insol- vency, and fusing at least seven systems of law into one, and abolishing some half-dozen injurious tenures, and suppress- ing all religious establishments, and asserting the State against a Church backed by all Catholic Christendom, and commencing the free education of twenty-six millions of people, and creating communications, and forcing a whole population through the military mill, to win half their country, acre by acre, man by man, back from barbarism to civilization. The work will be done, but unless the Church will lend its aid it is the heaviest task set before any body of European statesmen. In North Italy the aid or the opposition of the Church now matters little. The people have not become Pro- testant, nor are they likely to become such. Even should there be a revival there of Christianity, its form will not be that which the Teutonic races, and they alone, have accepted as the only conceivable embodiment of universal truth. But the people have b6come" intensely hostile to sacerdotalism, and whether Catholicism revives in a purer form or the Northerners sink into pure indifference and secularism—it is Holyoake, not Voltaire, who is the danger in Italy—the power of Rome has passed away for ever. But in Naples the people believe still, and an honest reconciliation with the Papacy, a meant anathema against brigandage, carried straight out to the refusal of the viaticum, would do much of the work of armies. Even in that iniprobable case at least one generation must pass, three sets of children be educated, four classes of young men be passed through the military mill, which tarns Neapolitans in five years from Asiatics into Europeans, before Southern Italy will be an effective limb in the whole body ,politic. When it is, Italy will be among the foremost powers of the world, but before it is, crop after crop of statesmen and politicians and writers will have risen and passed away, experiment after ex- periment will- have failed, and Europe over and over again will have pronounced that the Italians, in seeking to govern them- selves, have undertaken a task too great for their capacity. It is not too great, for North Italy is a rreservoir of mental

power, but it is one which will tax every energy of this and the next generation, which would justify an almost Japanese policy towards the external world, which would certainly justify Baron Ricasoli in treating every invitation to engage in new expeditions as an invitation to peril all his country has gained.