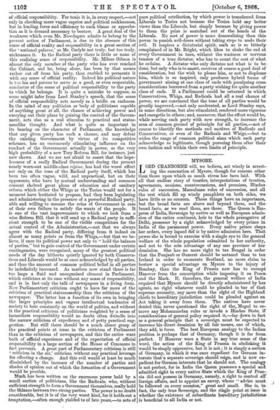 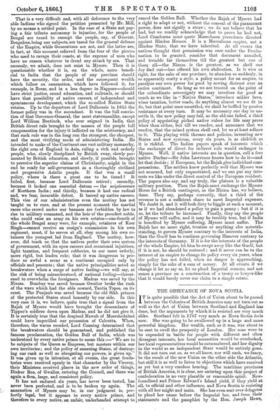 It has not endured six years, has never been tested, has never been perfected, and is to be broken up again. The annexation of Mysore may be, in our judgment is, per- fectly legal, but it appears to every native prince, and therefore to every native, an unfair, underhanded attempt to cancel the Golden Bull. Whether the Rajah of Mysore had a right to adopt or not, without the consent of the paramount power, does not signify a straw ; we do not believe that he had, but we readily acknowledge that to prove he had not, Lord Cranborne must quote Mussolinan precedents directed against Hindoo Houses. It is a Mussulman empire, not a Hindoo State, that we have inherited. At all events the natives thought that permission was sure under the Procla- mation to be granted, consider that document annulled, and tremble for themselves till the greatest but one of them all—the Nizam is the greatest, as we shall one day find out—has offered his own abdication. Is it wise or right, for the sake of one province, to abandon so suddenly, in so apparently crafty a style, a policy meant for an empire, to paralyze our own power for good by sowing distrust over an entire continent. So long as we are trusted on the point of the subordinate sovereignty we may interfere for good as much as we like in " Native States," introduce milder laws, wiser taxation, better roads, do anything almost we see fit to do, but that point once unsettled, we shall be baffled by passive resistance at every turn. It may be necessary one day to un- settle it, the new policy may fail, as the old one failed, a third policy of appointing picked native rulers for life may prove wiser than either, but till we resolve, and announce that we resolve, that the mixed system shall end, let us at least adhere to it. This playing with thrones and policies, inventing new States and new systems, every six years, is as childish as it is riskful. The Indian papers speak of interests which the exchange of direct for indirect rule would endanger in Mysore. Well, if native interests are in question, call a free native Durbar—Sir John Lawrence knows how to do it—and let that decide ; if European, let the Rajah give individual com- pensations. The settlers knew perfectly well that Mysore was not annexed, but only sequestrated, and we can put any inte- rests we like under the direct control of the European resident. The papers also say, and say truly, the plateau is a valuable military position. Then the Rajah must exchange the Mysore Horse for a British contingent, as the Nizam has, we believe, done. They say, perhaps correctly, that a third of the revenue is not a sufficient share to meet Imperial expenses. We doubt it, and it will look dirty to higgle at such a moment, as if we had abandoned a policy to gain a penny ; but if it is so, let the tribute be increased. Finally, they say the people of Mysore will suffer, and it may be terribly true, but if India is benefited by Mysore suffering, Mysore must suffer. The Rajah has no more right, treaties or anything else notwith- standing, to govern Mysore contrary to the interests of India, than the Guelf has to continue governing Hanover contrary to the interests of Germany. If it is for the interests of the people of the whole Empire, let him be swept away like the Guelf, but if it is not, he should be restored ; and it never can be to the interest of an empire to change its policy every six years, when the policy has not failed, when no danger is approaching, simply for the sake of a sum of money. At all events, if we change it let us say so, let us plead Imperial reasons, and not annex a province on a construction of a treaty so lawyer-like that it would barely cover our claim to a simple estate.