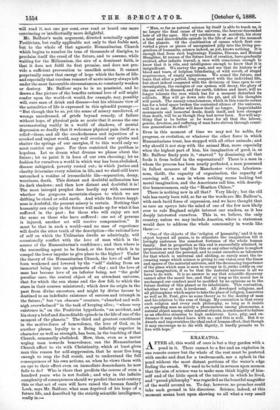 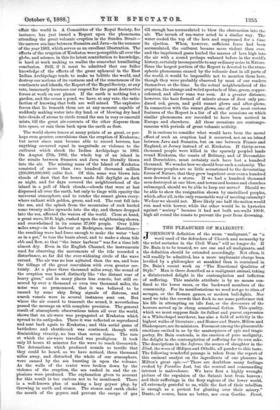 AFTER all, this world of ours is but a tiny garden with a pond in it. There cannot be a fire and an explosion in one remote corner but the whole of the rest must be pestered with smoke and dust for a twelvemonth, nor a splash in the pond without the most distant portions of the water's edge feeling the swash. We used to be told in sermon upon sermon that the aim of science was to make man think highly of him- self and of the little speck of the universe in which he lived, and "proud philosophy" was regarded as the boastful magnifier of the world around us. To-day, however, no preacher could take such ground in his discourse. Science, indeed, at this moment seems bent upon showing us all what a very small

affair the world is. A Committee of the Royal Society, for instance, has just issued 'a Report upon the phenomena attending the great volcanic eruption in the Sundra Strait— the narrow sea-lane between Sumatra and Java-in the summer of the year 1883, which serves as an excellent illustration. The effects of the eruption of Krakatoa were perceptible all over'the globe, and science, in this its latest contribution to knowledge, is hard at work making us realise the somewhat humiliating conclusion. Still, if it must be admitted that our fuller knowledge of the effects of the great upheaval in the East Indian Archipelago tends to make us belittle the world, and destroy our notions of its vastness and of the remoteness of its continents and islands, the Report of the Royal Society, at any rate, immensely increases our respect for the great destructive forces at work on our planet. If the earth is nothing but a garden, and the ocean a pond, we have, at any rate, the satis- faction of knowing that both are well mined. The explosive forces that lie beneath them are at any moment capable of `suddenly making water into dry land, or of blowing dry land into clouds of atoms to circle round the sun in rosy or emerald mists, till the great air-currents of the ether disperse them into space, or rain them back upon the earth as dust.

The world shows traces at many points of as great, or per- haps even greater, convulsions than the eruption of Krakatoa ; but never since man became able to record horrors, has anything occurred equal in magnitude or violence to the outburst which shook the Indian Archipelago in 1883. On August 27th, 1883, the whole top of an island in the straits between Sumatra and Java was literally blown into the air. The missing mass of the Island of Krakatoa consisted of more than two hundred thousand million (200,000,000,000) cubic feet. Of this, some was blown into clouds of dust that for hours made full daylight as dark as night, and for days covered the neighbourhood of the island in a pall of black clouds,—clouds that were at last dispersed all over the earth, but only to tinge with opacity the universal atmosphere, and to render the sunset glows every- where radiant with golden, green, and red. The rest fell into the sea, and the splash from the mountains of rock hurled some twenty miles upwards into the sky, and thence dropped into the sea, affected the waters of the world. Close at hand, a great wave, 50 ft. high, rushed upon the neighbouring shores, and overwhelmed in its course 37,000 people. Over 2,500 'miles away—in the harbour at Rodriguez, near Mauritius— the resulting wave had force enough to make the water "boil as in a pot," to toss the boats about, and to make a sham tide ebb and flow, so that "the inner harbour" was for a time left almost dry. Even in the English Channel, the instruments used for observing the movements of the tide recorded a disturbance, so far did the ever-widening circle of the wave extend. The air was no less agitated than the sea, and bore the tidings of the great convulsion with even greater cer- tainty. At a place three thousand miles away, the sound of the eruption was heard distinctly like " the distant roar of heavy grins," and in many places less remote, but still re- moved by over a thousand or even two thousand miles, the noise was so pronounced, that it was believed to be caused by some ship firing signals of distress, and search vessels were in several instances sent out. But where the air ceased to transmit the sound, it nevertheless passed the message on with complete precision. The general result of atmospheric observations taken all over the world, shows that an air-wave was propagated at Krakatoa which spread to its antipodes. There it was reflected or reproduced and sent back again to Krakatoa ; and this aerial game of battledore and shuttlecock was continued, though with diminishing vivacity, no less than seven times. The rate at which the air-wave travelled was prodigious. It took only 13 hours 45 minutes for the wave to reach Greenwich. The detonations which produced sounds so terrific that they could be heard, as we have noticed, three thousand miles away, and disturbed the whole of our atmosphere, were caused by the sea bursting in upon the volcano. As the walls of the crater were broken down by the violence of the eruption, the sea rushed in and the ex- plosions were produced. The explanation given to account for this result is too curious not to be mentioned. There is a well-known plan of making a lazy geyser play, by throwing in earth and stones. The stones and earth choke the mouth of the geyser, and prevent the escape of gas

till enough has accumulated to blow the obstruction into the air. The inrush of sea-water acted in a similar way. The water cooled the top of the lava and suppressed for a time its ejection. When, hoivever, sufficient force had been accumulated, the outburst became more violent than ever, and the imprisoned gases hurled the masses of lava high into the air with a sound perhaps unheard before in the world's history, certainly incomparable to any ordinary noise in Nature. Since the largest.portion of the Report is devoted to the atmo- spheric phenomena caused by the volcanic dust in all parts of the world, it would be impossible not to mention them here, though they were probably observed by most of our readers themselves at the time. In the actual neighbourhood of the eruption, the strange and weird spectacle of blue, green, copper- coloured, and silver suns was seen. At a greater distance, however, the haze formed of minute atoms of dust only pro- duced red, green, and gold sunset glows and after-glows. In connection with the sunset glows, one of the most curious features of the Report is a list of all the occasions on which similar phenomena are recorded to have been noticed in Europe and elsewhere. All these occasions are contempo- raneous with periods of great volcanic activity.

It is curious to consider what would have been the moral effect of such an eruption had it occurred, not on an island between Java and Sumatra, but on one between France and. England, at Jersey instead of at Krakatoa. If thirty-seven thousand people were killed in the sparsely peopled lands round Krakatoa, the coasts of Brittany, and of Devonshire and Dorsetshire, must certainly each have lost a hundred thousand. We wonder how we should bear such a calamity. The European peoples are so little accustomed to the devastating forces of Nature, that they grow impatient over even a hundred men drowned in a storm. If we had a hundred thousand men destroyed at one blow, and towns and houses and churches submerged, should we be able to keep our nerve? Should we be able to show the resignation shown by uncivilised peoples, which, after all, is the only reasonable way of meeting calamity? We fear we should not. More likely one half the nation would run mad with horror, while the other would be in hysterics against " society" because it had not built sea-walls 100 ft- high all round the coasts to prevent the poor from drowning.