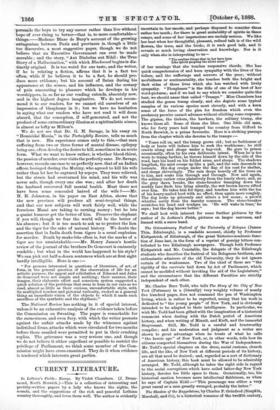 Page 22, 6 October 1888 — The Octocentenary Festival of the University of Bologna (James Thin,
Close

The Octocentenary Festival of the University of Bologna (James Thin,

Edinburgh), is a readable account, chiefly by Professor Kirkpatrick, of Edinburgh, of the great llistorice-academic func- tion of June last, in the form of a reprint of gossipy letters con- tributed to two Edinburgh newspapers. Though both Professor Kirkpatrick and Mr. Constable, the delegate of the Edinburgh students who describes the festival of his Bolognese brethren, ate enthusiastic admirers of the old University, they do not ignore certain of its weaknesses. Two of the chief of these are "the rigidity of the curricula laid down by Act of Parliament, which cannot be modified without invoking the aid of the Legislature," and the circumstance that the different Faculties are strictly independent of each other.